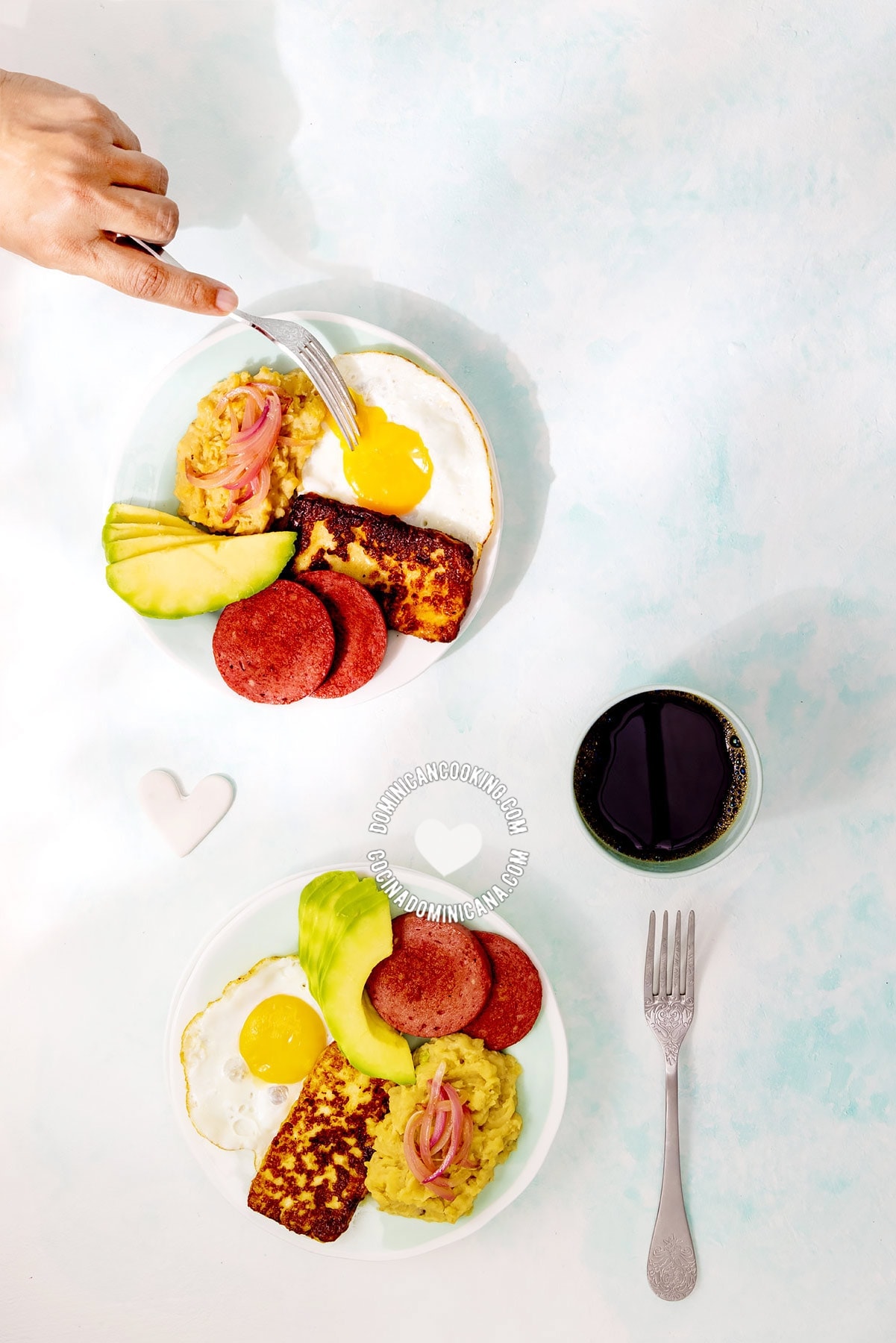 Learn about Dominican cuisine history and the Dominican Republic food culture in a well-researched guide of the origins of our cookery with all the information you need about what makes Dominican dishes ours, where they come from, and the influences that shaped them.

Our blog, besides being a collection of recipes, articles, videos, and pictures of Dominican food, is a source of information about our cuisine, dishes, ingredients, and history. It was conceived as a help for those who want to learn about Dominican culinary culture, whether they are Dominican or not.

Aside from the internet's most complete collection of authentic traditional Dominican recipes, we have extensive resources for you to learn about our cuisine. This is an abbreviated introduction to Dominican food history.

Dominican cuisine is the result of the crossroads of many continents and many countries. Taino, Spanish, and African (in order of arrival) were the cultures that most strongly influenced Dominican cuisine. But there were more...

Before the Spaniards arrived on the island of Hispaniola in 1492, the Taino Indians (native Hispaniolans) maintained a diet that reflected the resources found in their natural habitat, as well as their technological limitations.

There were few mammals that could be hunted for food, so the main contribution of the Taínos to our culinary culture came in the form of seafood (lambí being one), vegetables (of which cassava (yuca) and sweet potato (batata) are the most popular ones), and cooking methods (BBQ, the word and form of cooking can be traced back to them).

We are fortunate that many of these dishes and ingredients have survived and today are an important part of the rich Dominican culinary culture.

With the arrival of the Spaniards, many new species of animals, vegetables, fruits, and grains found their way to Hispaniola. The Spaniards also introduced many foods typical of the Mediterranean cuisine and others that had been passed down to the Spaniards during the 700-year Moorish domination of the Iberian peninsula.

To Spaniards, we owe the introduction of every meat animal to the island, as well as dried salted fish (bacalao and arenque) and non-native fruits and plants.

Since the Tainos had a limited repertoire of cooking methods, most known to us came from the Spanish conquistadors.

The arrival of enslaved Africans in 1503 presented yet another new (and important) gastronomical imprint on Hispaniola. It is worth noting that the African influence is very strong in Dominican culture - and the cuisine is no exception.

Enslaved Africans in Hispaniola learned to make the most of what was made available to them. With them came the knowledge of how to use plantains, as well as some of our most cherished stews and fried foods.

Other regions and influences have found their way into our kitchens too: From Chinese to British Caribbean, to Middle Eastern, and more. Pasta is a fundamental part of Dominican cooking; spaghetti was once called "the meat of the poor". Exotic ingredients, like salted codfish and salted smoked herrings, are commonly found in our kitchens.

Similarities with other countries

The Dominican fare is very similar to that found in other Latin American countries, especially Cuba and Puerto Rico - the only two other Spanish-speaking countries in the Caribbean. Some of the dishes are almost identical and only the names change.

Sazón is a mixture of spices and herbs, sautéed until the flavors are set free. Typically, a sofrito (sauteed sazón) incorporates thyme, salt, mashed garlic, parsley, onion (finely diced), green pepper, coriander/cilantro, tomato, tomato paste, and vinegar. Many Dominican dishes are prepared using this mixture. Sometimes, to shorten the preparation time, people blend these ingredients and keep them in the fridge for a "ready-to-use" seasoning.

Sofrito is another word similar to sazón, but it is more popularly used in Puerto Rico to describe their sazón. We generally do not use adobo, though the Dominican diaspora in the US has adopted it into their vocabulary.

The traditional Dominican diet is very vegetable-rich, with an emphasis on fresh vegetables and herbs, and homemade ingredients and foods. As times changed, this has at some level been lost to modern convenience, availability of industrial food, and a more hectic lifestyle. Not all is lost though, and our recipes have been written with this tradition in mind.

Dominicans typically have three meals a day. The contents of these meals will depend on family culture, financial situation, and region. While campesinos (people from the agricultural regions) would tend to have heavier breakfasts, city dwellers typically prefer a lighter breakfast for a long day of sitting behind a desk.

Breakfast for Dominicans is usually a light meal; the same dishes prepared for dinner are also prepared for breakfast, especially when one needs a hearty start to the day. A typical Dominican breakfast could consist of a hot drink and some Pan de agua bread. A popular choice is mangú accompanied by fried or scrambled eggs and topped with sauteed onions. The best-known Dominican breakfast meal is Los Tres Golpes.

A few pieces of boiled cassava, mashed auyama (pumpkin), mashed yautía, or another root vegetable are a good substitute for mangú.

La comida (lunch) is the most important meal in the Dominican Republic. The family will gather around the table to share La Bandera Dominicana (the Dominican flag), our traditional lunch meal. This consists of a combination of white rice, red beans, meat (chicken, pork, or beef), and salad or a side dish, and when prepared correctly, it becomes a meal that includes all food groups.

The fresh ingredients provide for a meal that is not only delicious but also healthy and nutritious. Accompany your lunch with a glass of ice water and end it with dessert, followed by a cup of coffee (un cafecito).

Dinner meals will depend entirely on family customs. Most families would serve something similar to our breakfast. Others – especially now with working moms and dads – would have something closer to a lunch meal. Many families prefer something light, like hot drinks, fruit juices, or fruit milkshakes, and perhaps some of our porridge dishes.