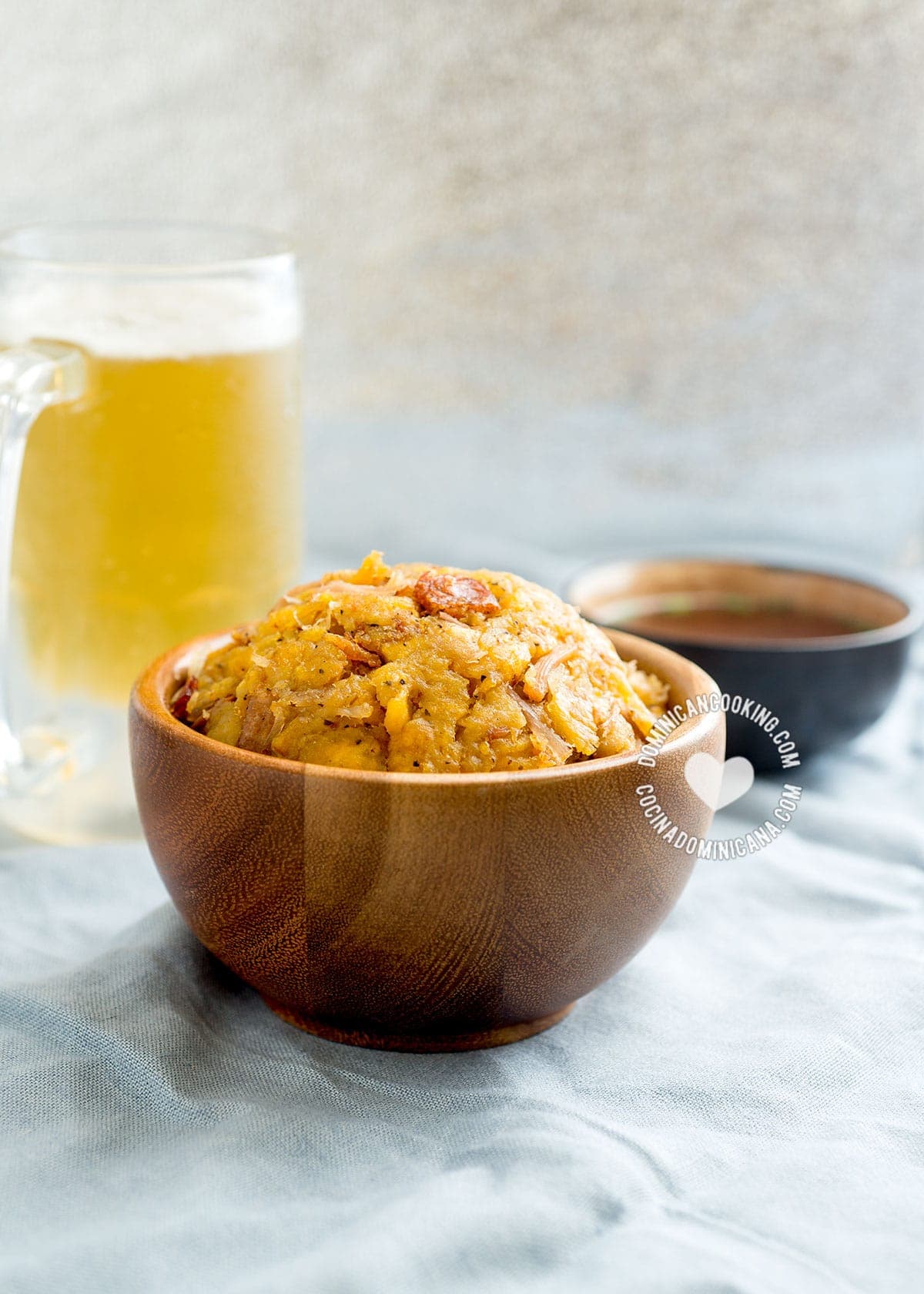 What can we say about a mofongo recipe that has been shared over 75k times and made and loved by thousands of readers? That it is simply delicious, for starters. With an absolutely essential video to make it even easier, it makes for a great dinner recipe any time of year.

Plantains are a staple in any Caribbean kitchen, and the delicious mofongo – never, ever to be confused with mondongo! – is one of our star plantain recipes. An amazingly flavorful dish that, while rarely made at home, you can now enjoy any time.

If I had to define mofongo in a word, that would probably be umami (savory), there are so many strong flavors in this plantain dish, but they somehow manage to work together. It truly is an unforgettable dish.

Classic plantain mofongo is a dish made of fried plantains, mashed and mixed with garlic paste and chicharrón (crispy pork skin). It is served alongside beef broth. Traditionally, mofongo is served in a pilón, a wooden mortar (the bowl-like part of the mortar and pestle).

The recipe includes a beef broth, but you can also serve it with Caldo de pollo (chicken broth), or for a vegan mofongo, leave out the chicharrones and serve with our vegetable stock.

For chicken mofongo, you can serve it alongside Pollo guisado with abundant sauce, instead of broth. Another great combination is serving it with Res ripiada, our Dominican ropa vieja-style beef.

These are other amazing mofongo recipes to try.

As I expand on under the recipe, there are two types of mofongo: the Puerto Rican dish, which is made from fried plantains, and has become the most common one served everywhere, even in the Dominican Republic. Dominican mofongo, however, was traditionally made from roasted plantains, typically cooked by burying them under hot ashes (just like Batata asada).

In the recipe, I show you how to make both types of mofongo, though I have adapted the Dominican version to modern ovens and air fryers since I cannot make a fire to bury plantains under the ashes, and would guess that most of you can't either.

As a result, one will be the fried mofongo we all love, the other – a bit drier, I admit – it's much lighter and lower in fat content, but requires a lot more broth to serve.

If you want to make pork cracklings from scratch, follow the directions and video in this recipe. 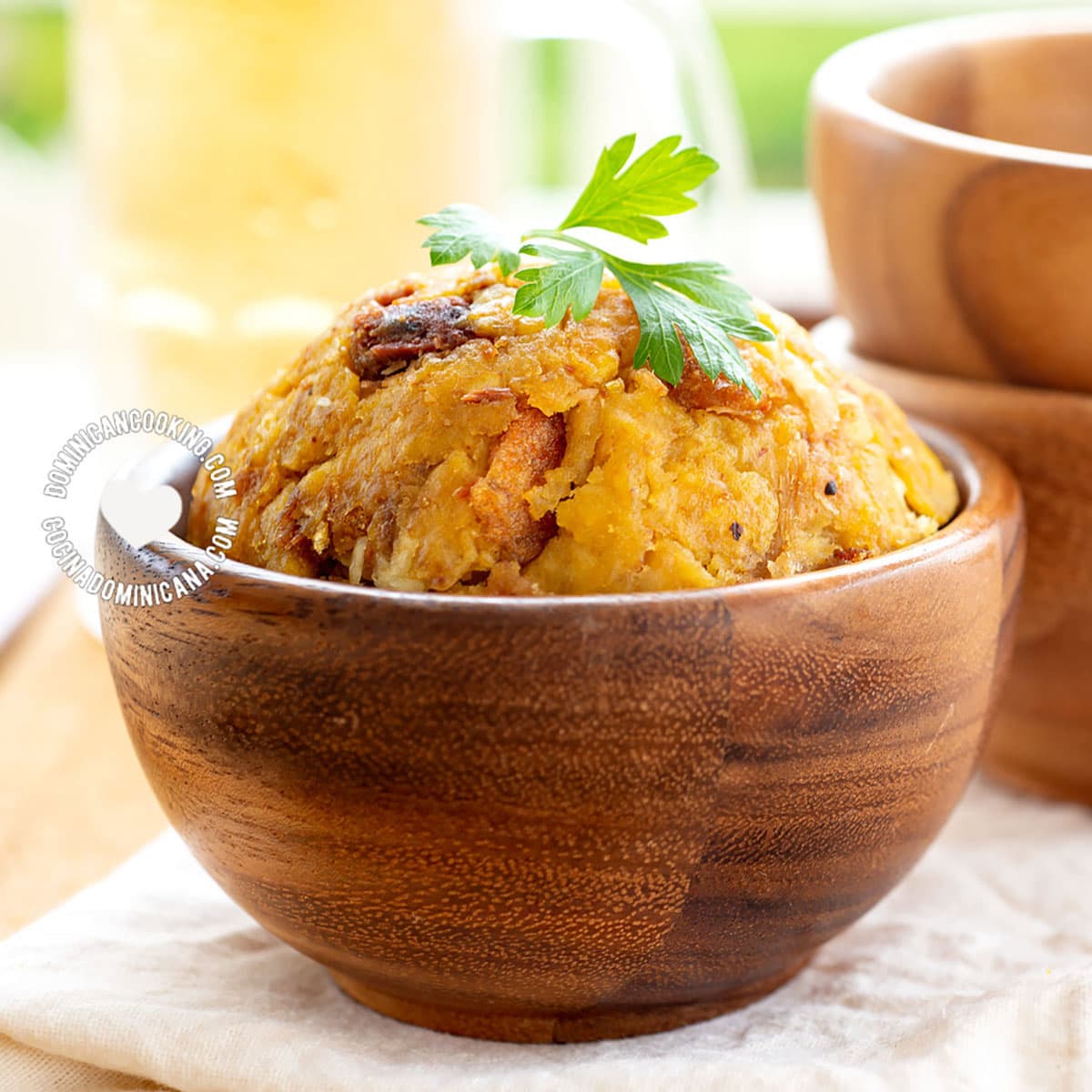 How to Make Mofongo [Recipe + Video]

For the beef broth

For the Puerto Rican mofongo

For the old-style Dominican mofongo

How to make the broth

How to make Puerto Rican mofongo

How to make old-style Dominican mofongo

Add a sprinkle of black pepper to the broth, to enhance the taste. If you have a deep fryer, you can use it to fry the plantains.

Where is mofongo from?

Mofongo is a dish with a special place in Dominicans' hearts and stomachs and is considered part of our tradtional comida criolla.

Mofongo, tostones, and mangú are probably the favorite plantain dishes in the Dominican Republic, but you do need to know that there's another country that lays claim to this dish.  So let's dig into the history of mofongo:

Mofongo is possibly a pan-Caribbean dish (it may exist in one way or another in Cuba, the Dominican Republic, and Puerto Rico). In an 1875 dictionary of Cuban words (1), I found a mention of a dish called "mogo" that sounds like something between a mangú and a mofongo (there's a Mexican mogo too).

In Dominican cookbooks from up to the middle of the last century, all mofongo recipes were based on roasted plantain [2][3]. And it was the case even in the mid-20th century editions.

I also remember that my grandmother used to make a dish exactly like that, though I don't remember what she called it. I was a little kid, so no surprise.

The Dominican mofongo recipe turns out to be a different version than fried Puerto Rican mofongo, and it was made with plantains roasted under hot ashes, in the same way, we make batata asada.

Interestingly, there is also a traditional Dominican soup based on a similar principle in our collection of traditional recipes.

So, although we have made known to the world our informed opinion that fried mofongo comes from Puerto Rico, it is clear that roasted plantain mofongo was a Dominican dish probably during the same time, and perhaps - I speculate - a proto-mofongo of a common African origin also found its way to Cuba. My belief that both mofongo and mangú came from our African side of the family explains perfectly how all this happened.

So much of Puerto Rican cuisine is similar to Dominican food, owing to a common history (that only diverged during the 19th century) and during which there was constant back and forth movement between the two islands. We share very many dishes, share our love for the same starchy vegetables and plantain, and have rice and beans as the staple of our cuisines.

There are some differences in our cuisine, like in the spelling. What we know as guandules (pigeon peas) in the DR is spelled gandules in PR. Similar or identical dishes sometimes have different names. And some Puerto Rican dishes share a name but little else with some Dominican dishes.

It isn't surprising at all then that two similar dishes with the same name exist in both countries, or that a popular Puerto Rican dish has become a favorite here, after all both countries share the same influences from Taino, Spanish, and West African cuisine. Plantains were introduced to the Caribbean on our island, shortly after the first enslaved Africans arrived in Santo Domingo.

So this is my final answer: As far I can tell, fried mofongos are Puerto Rican recipes, and the traditional Dominican one is made with roasted plantains, although nowadays fried mofongo is the most popular and common in our country and we have adopted it with enthusiasm, so thanks to Puerto Rico for that.

What is mofongo made of?

Both the traditional mofongo Dominicano and Puerto Rico mofongo are made from green plantains and fried pork skin. But there are many other ways to serve it -including one made from yuca. Once we start to stray from the plain classic version, mofongo ingredients can vary a lot, you can see them further down.

How do you reheat mofongo?

If you ever have leftover mofongo that you want to reheat, the best way to do so is to heat a non-stick pan over medium heat and pan-fry the mofongo until it is heated through. I never had leftovers though.

What is mofongo in English?

There is no proper name for mofongo in English, so we just describe it by the ingredients in it. For classic mofongo, it can be called "garlicky fried green plantains with pork rinds and broth".

Can mofongo be made in a food processor?

I would not advise that as the plantain slices would not retain the texture we expect in mofongo. Typically, we mash the plantains with a mortar and pestle, a bit labor-intensive, but it guarantees the best result. You can also use a potato masher or the bottom of a metal cup.

When is mofongo eaten?

Mofongo can be eaten for lunch or dinner, as the main dish, or as a side dish. Mofongo is also a popular snack for late-night revelers looking to start or end the night with a hearty dish. It can be served with just chicharrón mixed in, or alongside meat or shrimp.

Trifongo is a Puerto Rican-style mofongo made with green plantains, ripe plantains, and yuca mixed together.