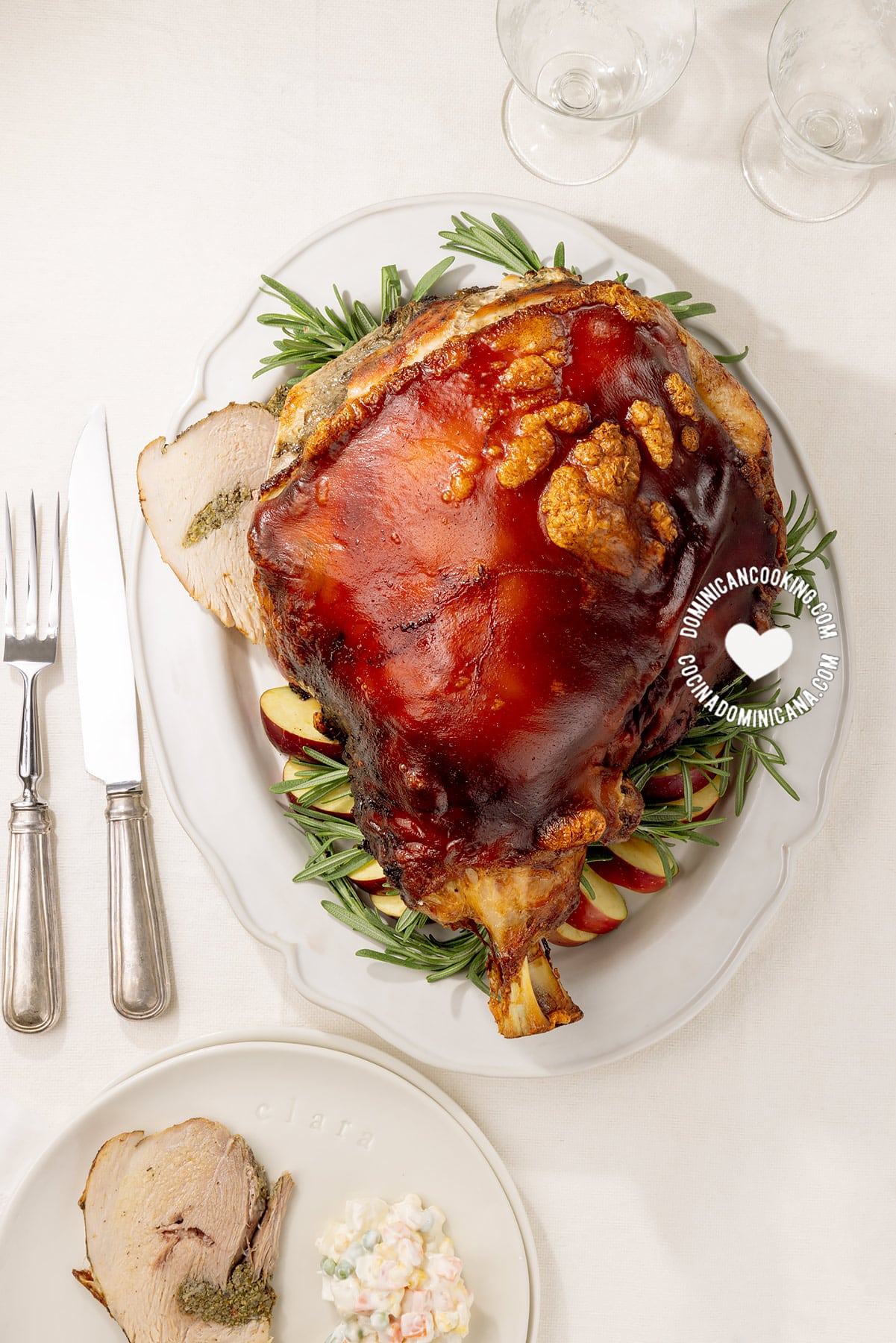 Puerco asado, lechon asado, o pernil asado, these are all names for the classic Dominican Christmas pork roast, the star dish of the holidays, dating back centuries. Learn how to make the best lechon asado with our easy guide with step-by-step photos and indispensable video.

Lechón asado or puerco asado, a flavorful pork roast with tender, juicy meat and crispy golden skin is the centerpiece of the Dominican Christmas feast and a dish that every Dominican household aspires to have on their dinner table. There are many carols that sing its praises.

Puerco asado or lechón asado is a pork roast made with either a whole pig, pierna, or pernil, marinated and stuffed with our signature seasoning, and roasted slowly until the meat is very tender and the skin crispy and golden brown.

Decades ago people would prepare their meat, season it, then send it to the town baker (panadero) for roasting, as it wasn't as common to have an oven at home. This is a custom that has almost completely disappeared nowadays, Dominican households prefer to buy their Dominican pernil, pierna, or lechón ready-made. from vendors, supermarkets, and road stands if they don't cook it at home.

To make lechón, it is carved with holes that are stuffed with seasoning and then rubbed with more seasoning, marinated, then slowly roasted. The cooking method may vary: en puya (spit-roasted over coal), or in an oven. Those are the basics, and this is how our recipe is made.

The difference between pernil and pierna is not only the part of the animal where they come from, but also the amount of fat, and meat tenderness: pernil is a smaller cut, with more fat, more tender meat, and more flavorful, whereas pierna is less expensive, has less fat, are bigger, and require longer cooking times. Piernas are more common in the Dominican Republic.

This recipe works the same for both.

It all depends on the family's tastes and budget.

If you bought the meat already frozen, or you have to freeze it until the day of preparation, thaw the pernil, leg, or whole pork by placing it in the refrigerator for 48 hours or one day for every 5 pounds of meat.

This is the safest and easiest method [1]. It is not recommended to force the thawing process by leaving it out of the refrigerator or heating it in any other way.

I have recreated here the traditional Dominican seasonings that we so love, where citrus juice, oregano, and garlic take center stage. Each cook has his/her preferred combination, but it will be similar to this.

This recipe is designed for a 12-lb leg of ham (pierna) or pork shoulder (pernil). The seasoning is sufficient for up to 16 lb leg or shoulder.

12 lb will yield about 12 generous servings. 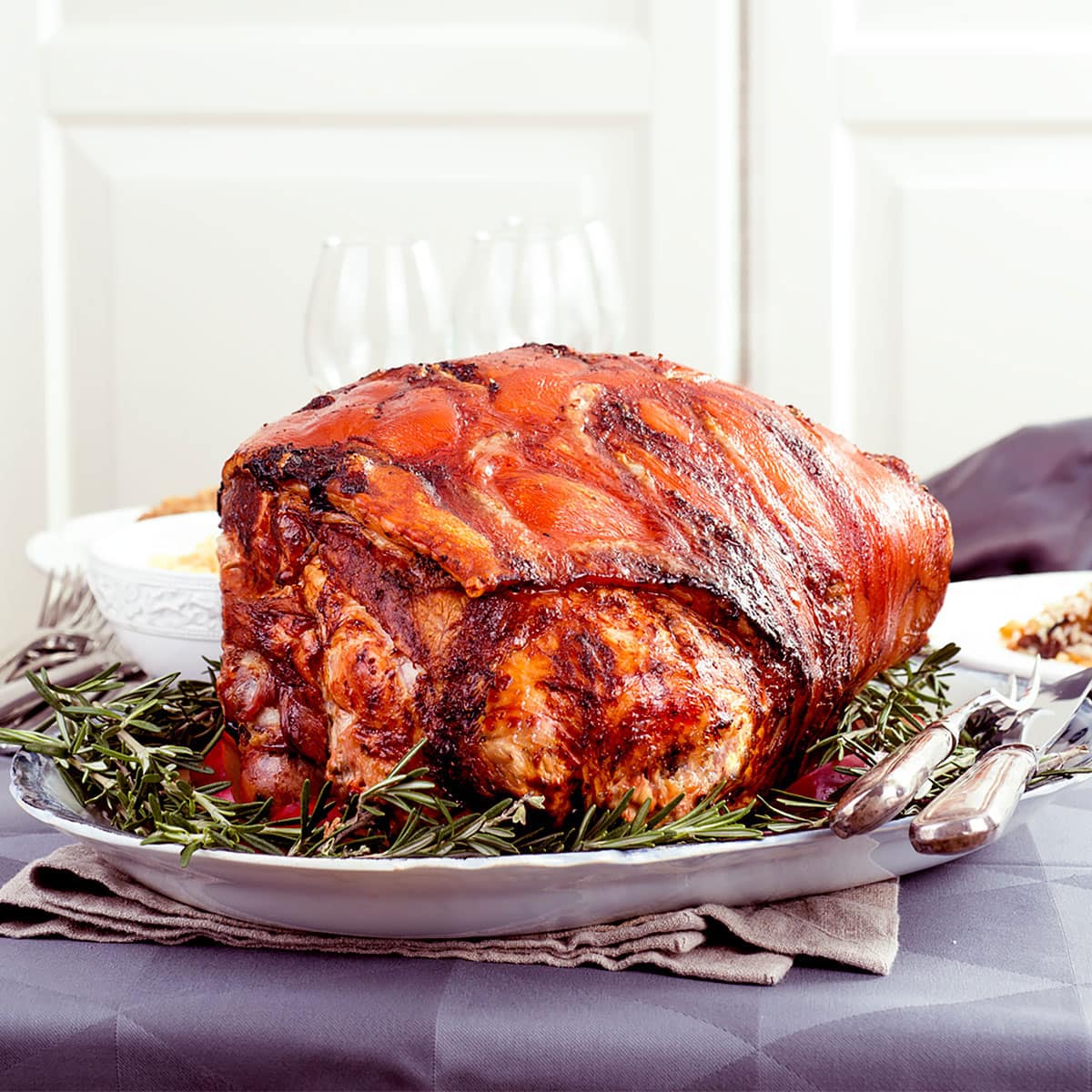 Getting ready for oven

Please keep in mind the type of oven you have. Convection ovens cook foods 30% faster than regular ovens, so adjust your timing for it if you have one. I strongly advise that you acquire a meat thermometer [Amazon affiliate link], as this will guarantee that your pork is cooked safely and to perfection.

What is pork shoulder best for?

Pork shoulder is a great cut for several methods of cooking: braising, roasting, and stewing. Skin-on pork shoulder or pernil is perfect for a flavorful, amazing Spanish Caribbean-style roast.

How long to cook pernil per pound?

This part was researched by Aunt Ilana

What you may not be aware of is that this dish has a connection to Tainos, the inhabitants of the Caribbean islands who were living here when Columbus and his fellow explorers first arrived from Europe in the late 15th century.

Many words in the Taino's language have since become household terms all over the world. Words like hammock, tobacco, and hurricane and their equivalents in many other languages around the world are derived from Arawak, the language spoken by the Tainos.

And every Dominican schoolchild knows that the Tainos prepared casabe, a thin unleavened cassava flatbread that is still made in the traditional way in the region and eaten to this day. The other main image of Taino cuisine is the spit roast, or barabicu, the framework of sticks set upon posts over a fire pit for roasting/broiling/grilling fish and meat.

Although the word may have come from the Tainos, they did not invent the actual cooking method. Humans in many parts of the world have been cooking meat in similar ways since prehistoric times. Still, barabicu caught on as an almost universal term, first adopted by the Spanish colonizers as barbacoa. The English transformed it into barbecue, which oddly enough sounds closer to the original Arawak word.

As a verb, it means the cooking method (“to barbecue”), while the noun “barbecue” is both the device used for the process and the social event itself. As an adjective, it describes the end product (“barbecued meat”). It’s often abbreviated as “BBQ”, which has given rise to the alternative but less common spelling of “barbeque”.

The main animal that the Tainos hunted for meat was the hutía - a smaller species of which survives and is apparently still eaten in Cuba. The Tainos also ate reptiles including snakes, lizards, and iguanas [2], and hunted with a breed of dog called the aon. A curious feature of these dogs was that they did not bark.

As more Europeans and Africans settled the island, the menu changed with pigs, cows, sheep, and goats replacing much of the Taino repertoire.

Present-day inhabitants of the Dominican Republic no longer eat hutías, and the meat one sees being roasted on a spit (en puya) is usually pork or goat. Both can be seen along the roadsides throughout the country, and many more stands spring up in the run-up to Christmas when roast pork is traditionally eaten. Many Dominican families do not go to the trouble of roasting their own pig but will buy the meat from one of these stands, a very tangible legacy of the island’s former inhabitants.

* Translation: "I bring the sauce for your pork roast, and I come happy negrita, oh how tasty!"