Empanaditas de Yuca (Cassava Empanadas) are delicious, gluten-free empanadas made with cassava flour, and that has a surprising crunchiness.

It was love at first sight with Señor Catibías, the Cassava Flour Empanadas seller, and complete infatuation with Don Queso de Hoja, the cheese vendor, whose, uh, balls of cheese were always the freshest…

Oh, how I miss the street vendors. All vendors really, but in particular, and in no small part due to their multitude, the food vendors. I could set my watch on my 5 o’clock catibías. And without fail, at six, the pastelitero would appear with his hot, savory pastries, clanking the lid of his big tin and cachú (ketchup) in tow.

Also a welcome sight, was Mr. Lambicero, ambling down the street with his giant Tupperware full of conch salad, served to you in a styrofoam cup, complete with a lemon wedge; a nice treat on a Sunday.

There are too many other snack vendors to mention further (the boiled egg kids, the chicharrones guy, the old man, and his corn-on-the-cob, etc., etc.), to cater to your every craving. Now if only they would adhere to some standard of decency in regards to the volumes of their loudspeakers, it would be a perfect street vendor world.

Catibía is the name for the tapioca flour empanadas that can be bought more often than not from street frituras, or from street vendors. Technically, though, catibía is the cassava flour from which the yuca empanada dough is made, but over time the empanada de yuca also came to be called catibías, possibly because it is the only thing traditionally made from tapioca in the Dominican Republic.

Our recipe is made with ready-made tapioca flour, which you can buy at the supermarket, or you can make it from scratch using our recipe. The homemade tapioca recipe in our blog worked better than the store-bought yuca flour for two reasons: The homemade one is fresher, and thus produces an empanada with better taste, the second is that empanadas made with fresh, homemade tapioca were much prettier and crispier.

The recipe also gives you many ways to adapt these empanaditas to different tastes and diets. This is an excellent gluten-free empanada recipe, as well as a paleo empanada. If you want you can use these gluten-free empanada shells to fill with other stuffings of your choice. And it's, by far, Aunt Clara's favorite savory cassava recipe. 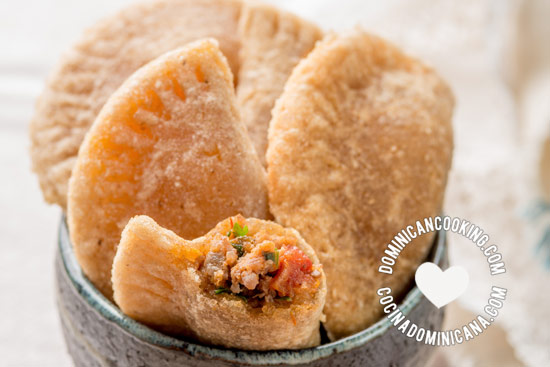 For the beef filling

For the cheese filling

To make the dough

Serving is two empanadas per person (8 in total), and approximate nutrition content is calculated with beef filling. Using homemade or store-bought catibía means that you'll need different amounts of water. There is no way to tell the exact amount, as they have different levels of humidity.

I used about ½ cup of boiling-hot water, adding small amounts (by the droplets), as I advanced into the preparation and the dough got drier and harder to work on. I also tested Asian-style tapioca, which has a coarser texture, and bits the size of demerara sugar. This did not work very well, as it broke down easily, and didn't taste the same.

I used a little over ⅓ cup of water in total, following the same procedure. I found homemade cativía easier to work with, and the dough was more pliable, kept its shape better. The result was also much more attractive, and the taste was a lot better.

Yes, you can bake the empanadas. I did it by heating the oven to 400 ºF [200 ºC] and placing the empanadas on a silicone baking mat and baking until lightly golden.  They were crunchy, had good texture, but were very pale (see video). You can also use these egg-free, gluten-free empanada wrappers and fill them with cheese, it's not as common as the traditional beef filling, but it's also a great choice. For non-traditional options, go with your favorite filling, as long as it's not too wet.