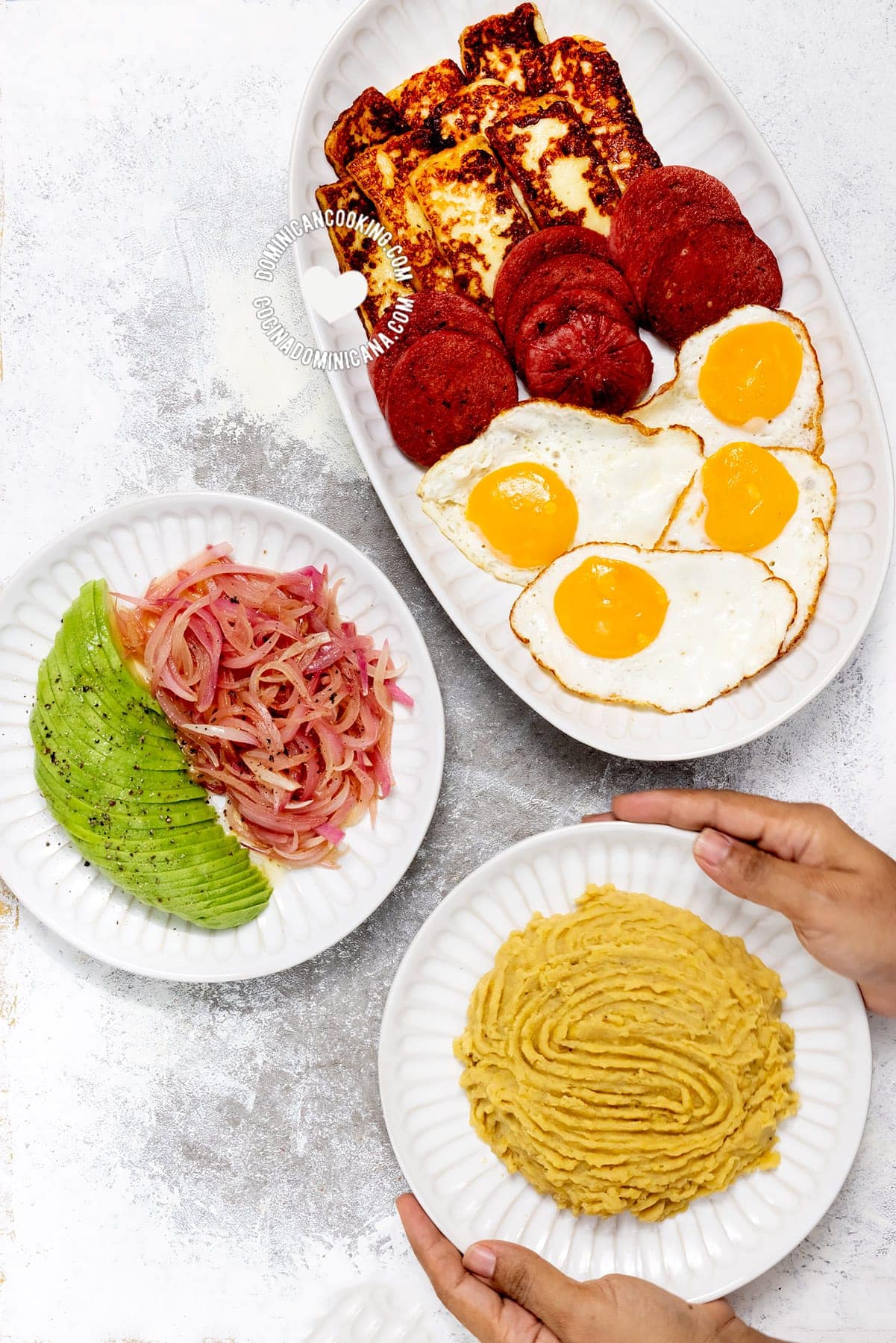 An iconic Dominican breakfast, the very popular Mangú con Los Tres Golpes is one of the best representations of our gastronomy. A day can only start well and get better when started with one of our most loved breakfast meals. Let me show you just easy it is to make this.

Generally, breakfast in the Dominican Republic nowadays is a light meal, as most of us have moved out of the campos and into sedentary jobs that do not require a heavy morning meal with a long preparation.

Don't miss reading some curious facts about the origins of the name.

What is "los tres golpes"?

Los Tres Golpes is the name given by Dominicans to the best-known breakfast of the Dominican cuisine, consisting of fried Dominican-style salami, fried cheese, and fried eggs served alongside mangú.

Mangú is a plantain dish made by peeling and boiling the plantains, then mashing them with a fork or potato masher, and made very smooth and creamy with the addition of liquid (usually cold water or some of the cooking water) and fat (typically oil or butter, although originally lard).

Outside the Dominican Republic, fried salami may sound a bit crazy, so in case you didn't know: it bears little resemblance to Italian salame (plural is salami), and just as little to Spanish salchichón, as it's also named in our country.

Queso frito (fried cheese) is made with the aptly named queso de freír (cheese for frying). It is an unripened, semi-hard cheese made from cow milk. It has a very high melting point, so it's quite easy to fry without melting, at least good quality queso de freír.

If you cannot get queso de freír, try to find plain halloumi (no mint!), it's as close as you'll get to the right texture and flavor.

Sunny-side-up eggs – with a crispy edge for some people. Just that simple.

Los Tres Golpes is not one, but three dishes (cheese, eggs, and salami), that are served alongside Mangú garnished with Dominican-style sauteed onions. If available, avocado is very welcome, but it isn't part of the original combination (some people call it Los Cuatro Golpes).

You can pick one of our hot breakfast drinks to serve alongside if you are trying to impress your family and guests.

As mentioned above, this is whole meal. This is why you can find the components in three separate recipes in our blog. We've combined it here so you can find it more easily.

Do you have any ideas to serve or improve this? Let us know in the comments. 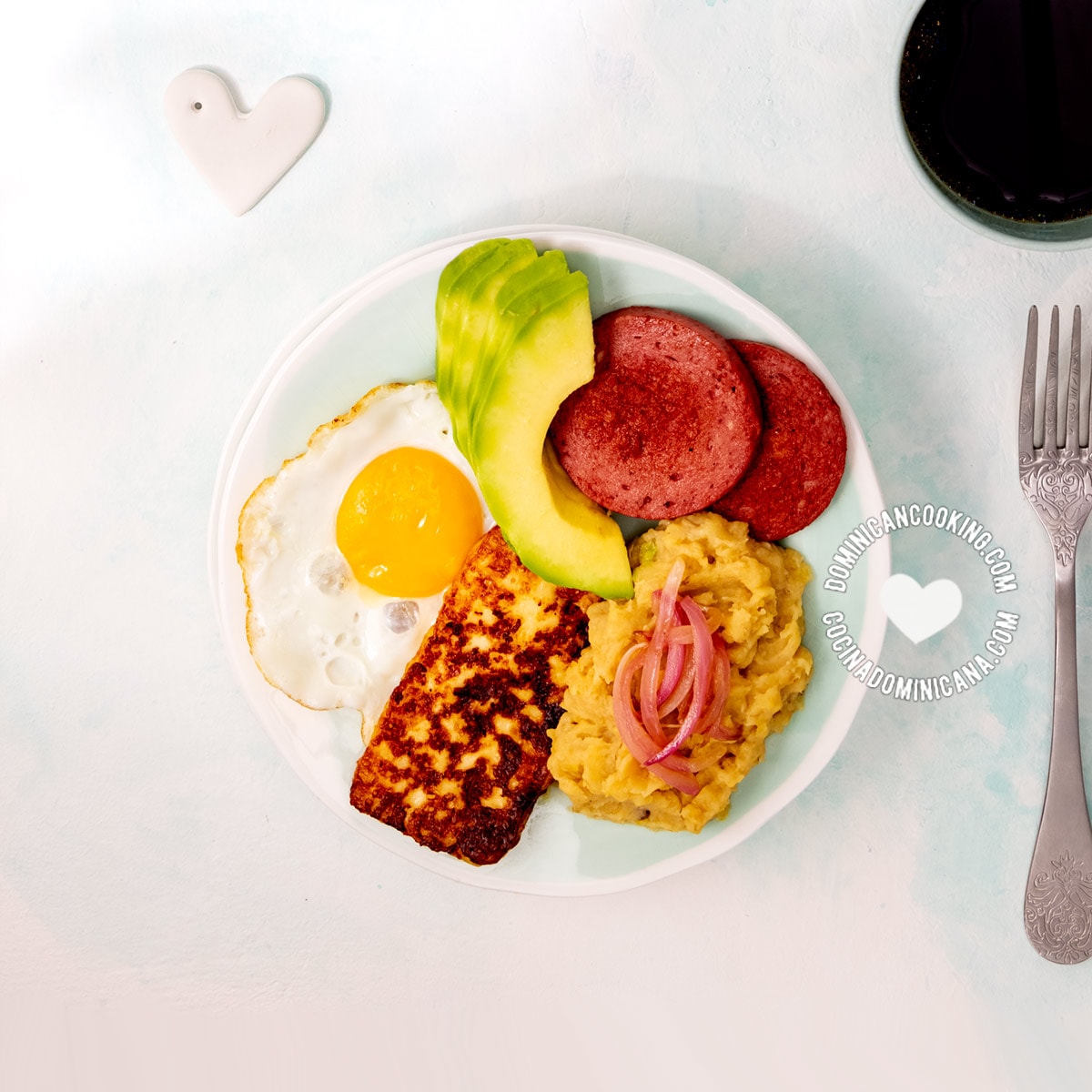 By: Clara Gonzalez
Learn how to make Los Tres Golpes, the iconic Dominican breakfast with Mangú. It is one of the best representations of our gastronomy and a must-try Dominican dish.
5 from 3 votes
Save for Later Send by Email Print Recipe
Prep Time 15 mins
Cook Time 20 mins
Total Time 35 mins
Course Breakfast
Cuisine Dominican
Servings 6 servings
Calories 978 kcal

To make the plantains

Nutrition calculation is a very rough approximation as Dominican salami is not part of the food database we use.

Why is it called Tres Golpes?

The name "Los Tres Golpes" for things that identify us as Dominican has a long history. It may have originally come from Perico ripiao, the predecessor to Merengue, our national music.

Perico ripiao was formed by tres golpes (three beats), which were the güira [Dominican instrument], tambora [drum] and accordion; while the symbols of the country were God, country and freedom [Dios, patria y libertad]. These were questions that any military officer could ask citizens to confirm Dominican nationality [my translation].

Soon the term "los tres golpes" was adopted by Dominicans for an even more ominous purpose during the Trujillo dictatorship. [2]

The youth felt the state of repression the most, because at night mixed patrols would go out, made up of members of the armed forces, who demanded that passers-by present their identity documents. All Dominicans had to carry these documents, and the people, in a sarcastic way, baptized them with the name of "los tres golpes"; that is, the Personal Identity card, the Dominican Party card, and the Mandatory Military Service card [my translation].

With the name already in the public consciousness when in the post-dictatorship salami became a staple nationwide (see the history of Dominican salami), we were ready for a new "Los tres golpes", one we are glad represents us now.

A quick but important note is that I --and many other writers-- have always translated it as "the three strikes", but if its origin lies in music, perhaps an appropriate translation for los tres golpes should be "the three beats". What do you think?

What do Dominicans have for breakfast?

What is Cuatro Golpes?

Cuatro Golpes is when you add some avocado slices to Mangú with Los Tres Golpes.

What is Tres Golpes in English?

There isn't a proper name for Tres Golpes in English, but given the origins of the name – as explained above – we suggest "The Three Beats" would be the best translation into English.

Where did Tres Golpes originate?