Chulitos (Cassava Mini-Rolls) are humble, but in my opinion, these are one of the best buffet dishes in Dominican cuisine.

Chulitos de Yuca are the quintessential street food: delicious, but not fully appreciated. Chulitos can be made filled with meat (the traditional way) or cheese or just plain.

Someone gave me a deep-fat-fryer about a month ago and it sat in my kitchen, ignored, until just last week. I was having such a hard time with the notion of sinking foods into so much hot sizzling oil, tightly contained in a bin-like receptacle plugged into the wall. And my arteries collapsing under the weight of it all.

But then I thought, Oh my God, I can make so many things! Things like Chulitos (Cassava Mini-Rolls).

As an initiation to my deep fat frying experience, I admit, I made chicken wings and potato skins, which were awesome - but hardly típico, you know? The night after that, we did tostones – and they were also awesome. Wow, I realized. Now I can make everything from kipes to pastelitos! Bollitos and chulitos, as well. An endless list of deep-fried delights.

It’s pretty easy; the food is placed in a basket and into the machine, which has this cool handle and a switch that lifts it up from (and into) the bubbling evil. There’s no splattering, no grease-fire freak-outs, and very little clean-up, de ñapa. Now I’m constantly searching out deep-frying ideas – which is sort of scary, if you consider that I’m in charge of meals, 7 days a week, for a family of four, and too much-fried food might alter their growth patterns or something. So I will try and control myself and make only the occasional fritura.

Chulitos de yuca is not something that Dominicans make at home. Aunt Clara's first experience with chulito was the very famous fritura in her childhood neighborhood. People would travel from far to have the spicy chulitos at Doña Dinorah's fritura. This is the recipe that she has recreated to great success.

Our Guest: Jill --a contributor to our book Aunt Clara's Dominican Cookbook-- is Canadian, mom to two Canadian-Dominican sons. She resided in Sosúa, Dominican Republic for many years, bringing an interesting perspective into our culinary culture 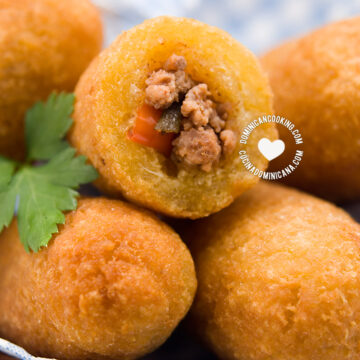 Chulitos can be made with beef filling (the traditional way) or with a cheese filling. This humble dish is rarely found on elegant tables although it is one of our most delicious dishes. Watch the video to make the filling here.

I found the grated cassava in the supermarket. Best thing ever!!!! Saves time and allows me tof make more of my favorite dishes that I would otherwise put off because of the whole grating process.

@melissa, i actually used a JUICER!! it worked out very welL!!!! i made them with cheese instead of beef so i had to make them into balls but it was delicious! AND THE KUICER IDEA WORKED PERFECT!

So with the these you do not dip in egg and flour and you do not have to refrigerate before frying like the Bollitos de yuca?

10.7Kshares
wpDiscuz
You are going to send email to