Pastelón de plátano maduro (ripe plantain casserole) combines the delicate sweetness of ripe plantains, flavorful juicy beef filling, & melting cheese. It is our favorite casserole and one of our favorite dishes. We serve it for everyday meals and special occasions. It's pure bliss.

Great for your get-togethers, potlucks, and cookouts, this dish is also part of our traditional Christmas feast. This is possibly the second most popular plantain recipe in the Dominican Republic. A dish that nearly no one will turn down.

Pastelón de plátano maduro is a one-pan dish, and can be served on its own, or as part of a larger meal. I merely serve a simple salad to go along with it on a weekday meal or serve it as a side dish if we're having a feast.

What is pastelon de platano maduro?

To make pastelon de platano maduro, the ripe plantain and minced beef are cooked separately, then arrange in layers along with cheese in a lasagna pan and baked until the cheese is bubbly and golden brown.

How ripe should the plantains be?

They should be completely ripe, but still mostly firm, with some black spots. If they're too ripe, the mash will be too mushy, if they are unripe, it won't be as sweet.

Can you make vegan pastelón?

Absolutely! We offer some vegan and vegetarian fillings, and you can either use vegan cheese or leave the cheese entirely out.

Except for ripe plantains, which may be a bit difficult to find in some countries, the ingredients for this pastelón are very accessible, so it's the cooking method. It makes it a great choice to serve something very Dominican and surprise your guests with this wonderful dish.

If you have any tips or secrets that make your pastelón special, please share in the comments! 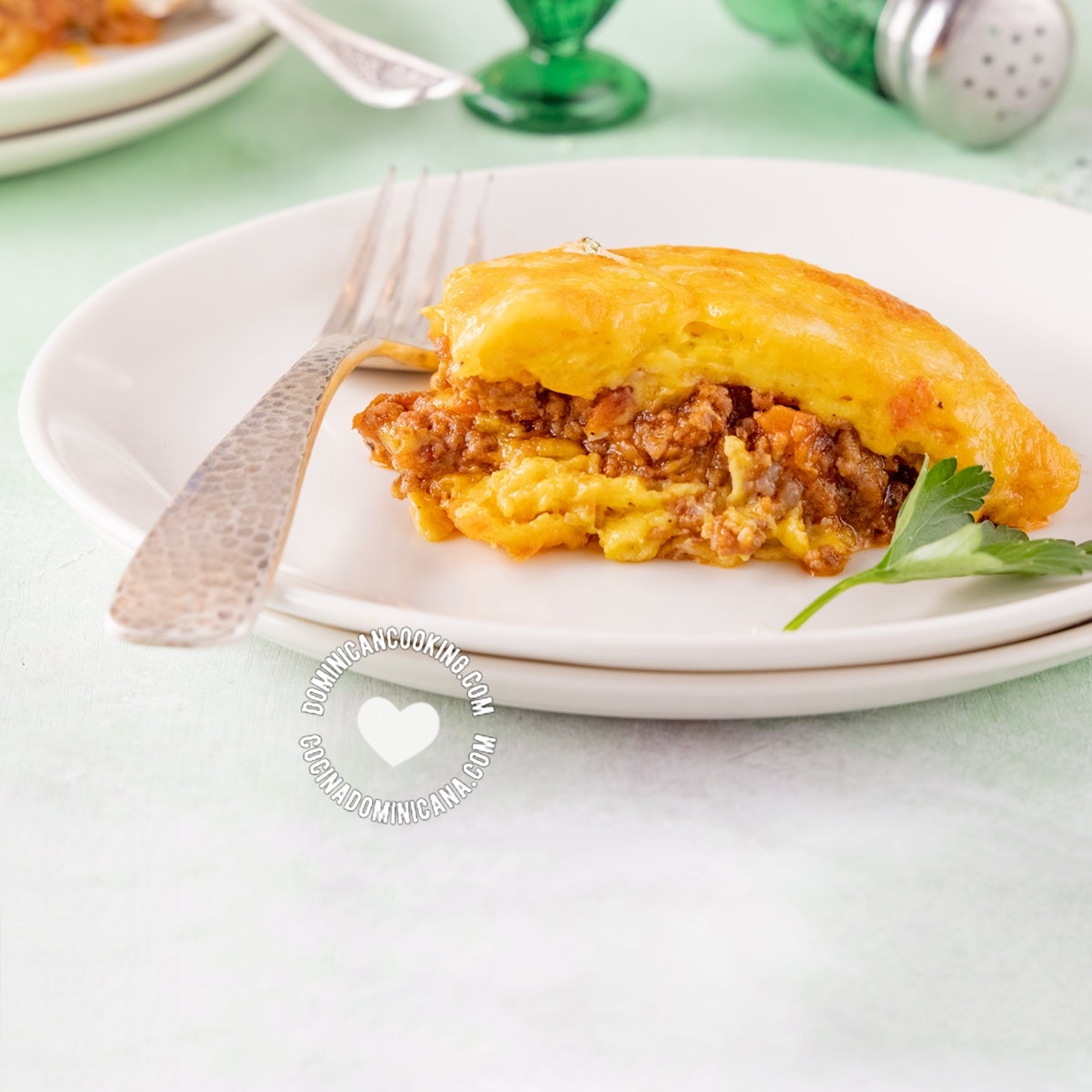 Your choice of cheese and the order in which the layers are distributed is a matter of taste. Basically, any cheese that melts works, I like mixing cheddar and mozzarella, for example, while some people like placing the cheese right after the meat layer. Go ahead, experiment!

This part of the post was written in collaboration with our friend Himilce A. Tejada. She is a Dominican food writer for the newspaper Diario Libre as well as other popular local Dominican publications.

Dominicans love their Pastelón de Plátano Maduro (Ripe Plantain Casserole), which is ironic because, apart from politicians, in this country, there is nothing that is more maligned than the plantain.

Plantains are accused, no less, of being partly responsible for our island’s rampant underdevelopment. According to some, it blocks the brain and stops intelligence from flowing; others say overindulgence leads to a dazed stupor. And some even go as far as to say that if American children speak English from a young age, it’s thanks to the “conflé” that they eat for breakfast, as opposed to mangú.

Whether fried, boiled, sliced or mashed into a Mangú (which a Dominican would never call ‘purée’), Mofongo or as a side dish to almost anything, Dominicans remain faithful to their plantains and seek them out and taste them everywhere they go.

Long live plátanos, and we’ll go on buying them even if they are rabizas (undersized runts).

As for those of you who still think that plantains make you stupid, this is for you: in India, when Alexander the Great arrived, bananas and plantains were known as “the fruit of the wise” because the Hindu Brahmins used to meditate under the shady leaves of banana or plantain trees. So there!

Plantains and bananas come from Asia. History tells us that when Alexander the Great arrived in India, he was surprised by their delicious taste and brought them to Greece. This was in around 327 BC. They spread further across the world thanks to Arab sailors who planted banana and plantain seeds along the east coast of Africa. Although Portuguese explorers introduced the crop to the new world in 1516, enslaved Africans played a key role in making it a central feature of the continent’s cuisine, mainly in the Caribbean, Central America, and the Pacific and Atlantic coastlines.

For better or for worse, bananas are one of the world’s most popular fruits. Plantains and bananas only grow in temperate climates and it’s estimated that 12 million tons are cultivated every year. 10 million tons come from Latin America.

The banana (Musa cavendish y M. Sapientum) and the plantain (Musa paradisiaca) are two varieties of the same fruit, a long-leaved plant of the Musaceae family. Each region has its own varieties and peculiar names: In some countries such as Mexico, Central America, and Spain, “plátano” is the word used for both banana and plantain, and the plantain is distinguished by the name “plátano macho”. In the Spanish-speaking Caribbean, we call the banana “guineo”, while the Venezuelans call it “cambur”. Dominicans call fried plantain slices “fritos” or “tostones”.

The main difference between bananas and plantains is that the former has more sugar and less starch, while the latter has more starch than sugar and has to be cooked before eating. A plantain’s taste depends on how ripe it is – the riper, the sweeter. Bananas are usually eaten raw, but can also be baked, fried or boiled in a variety of recipes. In India, for example, banana features in savory dishes.

Bananas are a good food for growing children: nutritious, an excellent source of energy, rich in vitamins A, C and K, glucids and potassium, as well as other minerals. Green plantains are a better source of energy than bananas (about 285 kcals per 100g) and are an ideal snack for athletes.

Most plantain and banana lovers know that they should be stored at room temperature. To slow down the ripening process, wrap them in a newspaper and keep them in the fridge. It’s also possible to peel and slice plantains for ‘tostones’ and store them in the freezer. Some even fry them once and store them to save time.