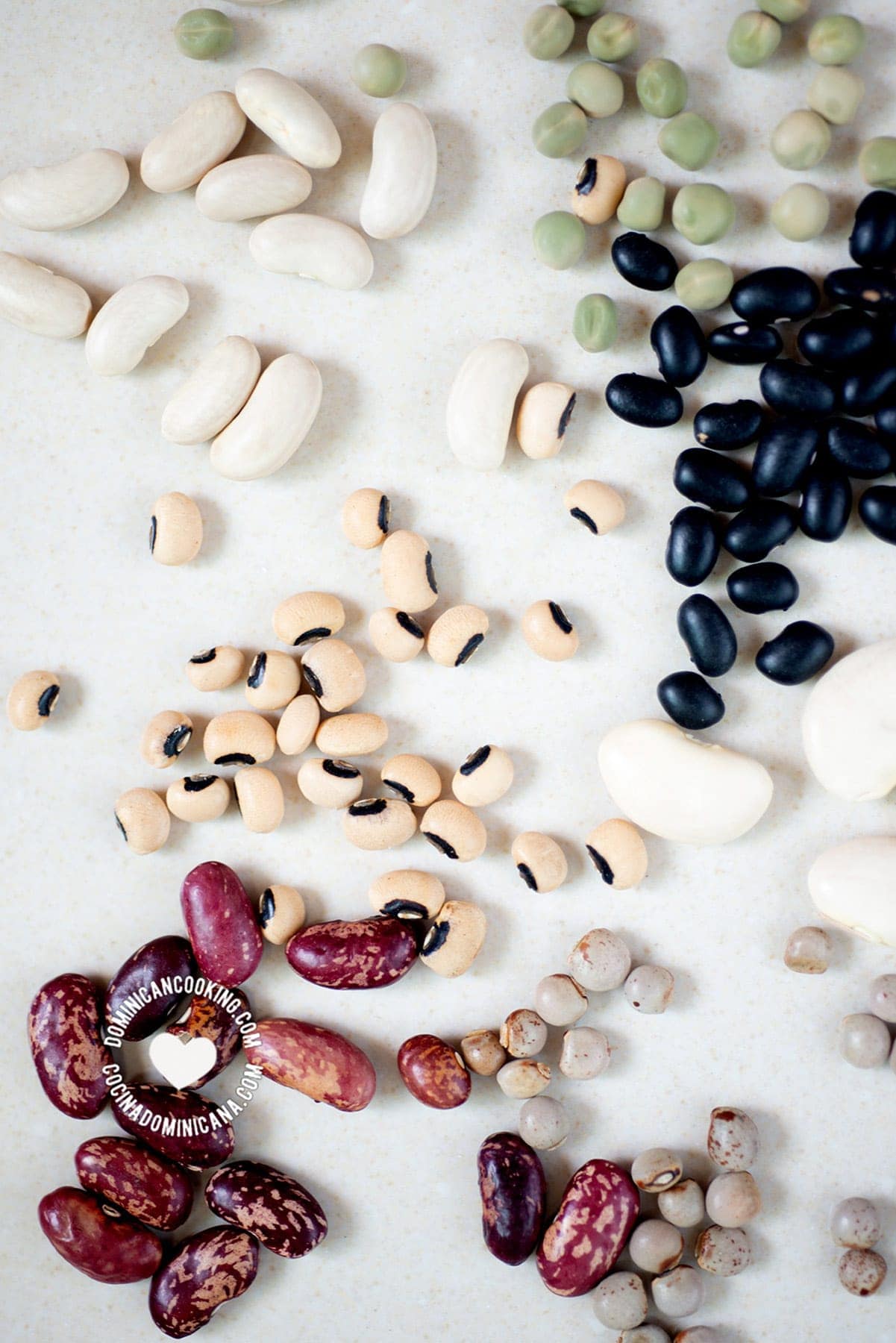 JUMP TO: show ↓
1. Vegetables, fruits, and herbs
2. Other ingredients
3. Dishes and preparations

Irish playwright George Bernard Shaw was referring to the confusion caused by English in Great Britain and the United States. We extend this to 'Twenty One Nations* Divided by a Common Language' when it comes to Spanish food names.

We find this sort of thing fascinating, and with our dynamic and ever-expanding glossary, we try to steer you through some of the pleasures and pitfalls caused by this linguistic mosaic. Whether you are an English speaker who has learned some Spanish, a Dominican Spanish speaker, or a native of another part of the Spanish-speaking world, this is dedicated to you.

Blame the conquistadors: in the case of several fruits and vegetables --as well as many flowers and birds of the Americas-- when the Spaniards arrived in the New World, they often would not think up new names for the things they came across but would give them the name of the nearest thing they thought it resembled.

In many cases, however, the indigenous name (or names) prevailed and are used to this day in standard Spanish and sometimes even in other languages.

The standard Spanish word aguacate for avocado originates in Mexico and is derived from the Aztec ahucatl which actually means “testicle”, and suggests that the Aztecs may have had a rather vivid imagination --or strange-looking gonads. In the Andean region, we come across palta for avocado.

What's called pimiento in most of the Hispanic world we call ají. This means pepper, which is also sometimes called chile in other countries, although this usually refers to the spicier varieties.

What is called sesamo in most Spanish-speaking countries (sesame in English), we call ajonjolí.

Auyama is the name in the Dominican Republic for a variety of locally-grown pumpkins and squashes.

In the Andes, we find camote, better known as boniato or batata, and sweet potato in English. The actual Dominican batata is known as Oriental yam in English.

Although most Spanish speakers stick to the Spanish spelling of the Italian “broccoli” – brócoli, some call it brécol.

In Spain, it is the word for cherry. What the Dominicans call cereza is not really a cherry: it is paler in color and not as even in texture. In English, it is called acerola cherry (Malpighia emarginata). What we know as cherries in English are called simply “cherries” (said with a Dominican accent) in the DR.

It is what Dominicans call passionfruit, known as parcha or parchita in several Hispanic countries.

This is used in the DR to mean fresh cilantro (US) or coriander (UK). It is also known as cilantrico to differentiate it from cilantro ancho. Another name Dominicans use is verdurita.

It is the stronger-tasting plant with broad leaves (sawtooth coriander or culantro) that has a taste similar to cilantro.

If you are seeking plantains and you ask for a plátano in Spain, you get a banana. If you ask for a guineo, well, you're likely to get a baffled look. Plátano is what in the Dominican Republic we call what they know as plátano macho, and plantain in English. The Venezuelan word for banana is the unusual cambur. Unripe bananas are called guineos verdes in the DR.

Guanábana, a prickly looking large fruit native to the Caribbean, is known as soursop in English.

Habichuelas in the Dominican Republic is what we call beans. In Spain, habichuelas are green beans. In the Dominican Republic, green beans are vainitas. In Spain, kidney beans and other similar beans like white beans are given the strange name judias. They are called frijoles in Mexico and Central America and caraotas in Venezuela. In other parts of the Spanish-speaking world, the term alubias is also used to mean these sorts of beans. Habas in the DR is white beans or Faba beans. In Spain, they are broad beans.

That quintessential Latin American crop, corn, has many different names across the Spanish-speaking world: maíz - as in maize - being the most common. Sweet corn is maíz tierno or maíz dulce. In Mexico the cob is called elote, in South America choclo , except for Venezuela where it is called jojoto. Central Americans call it chilote.

In Cuba, okra is not molondrón as it is called in the DR, but quimbombó – both names appear to have African roots.

Peach is durazno in some places and melocotón in others.

Known as bitter oranges or Valencia oranges in English, and translated (or mistranslated?) as sour oranges sometimes. It's a sour and bitter orange with tough skin that is used in Dominican seasonings and marinades, and the main ingredients in agrio de naranja.

The Dominican nispero (sapodilla) does not look very much like the Spanish yellow fruit of the same name, known in English as loquat, which is unknown in the DR. in Gibraltar we call it – for some reason – fruta americana or American fruit.

The most common way of saying potatoes in Spain is patatas except for in the southern region of Andalusia where they are called papas, as in most of Latin America.

Peas are elegantly known by their French name petits pois in the DR, and sometimes they are called arbejas. In Spain they are guisantes, and in Mexico, chicharos.

Repollo, or cabbage is col in Spain and many other Spanish-speaking countries.

Watermelon, usually called sandía, is patilla in Venezuela and many Dominicans also use this same name.

Called christophine in english (tayota in DR, chayote in Central America and Mexico) also known as alligator pear or mirilton.

Grapefruit is pomelo in Spain and toronja elsewhere. But toronja is not the only name we use: grapefruit is commonly called grei-frú as well as toronja.

Verdura means vegetable in Spain but is used to mean flat-leafed parsley in the DR, the diminutive verdurita is used for cilantro. The Dominican word for vegetables is not verduras but vegetales.

This variety of names are a feature of the Spanish speaking world, where different countries in Latin America and the Caribbean were settled at different points in history, with people from diverse parts of Spain and many other countries beyond, who put their particular stamps on the vocabularies of their new nations, often combining it with indigenous terms, all contributing to a rich diversity of language.

Shrimp are gambas in some Hispanic countries, and camarones in the Dominican Republic.

Cangrejo is the usual name for crab, but many Latin Americans, including Dominicans and Colombians also know it as jaiba. In the DR at least jaiba tends to mean fresh water crab and cangrejo refers to the marine variety.

Whipping cream is nata de montar in many Hispanic countries.

Conch (queen conch - Strombus gigas) which in the DR and Haiti is known as lambí, in Honduras it's a caracol.

In some parts of Latin America --like Argentina-- butter is called manteca instead of the correct mantequilla. In the Dominican Republic --and most of the Hispanic world-- manteca means lard.

Cream cheese (the sort you spread on a bagel) is also commonly known by its English name, although pronunciations and spellings may vary. The final 'z' sound in "cheese" is more often than not omitted. The real Dominican queso crema o cremita is a local cheese, which although white is not at all creamy in texture, more like firm cottage cheese. Be extra careful to pick the right one for your preparation. Our recipes use cream cheese for the American-style one, and queso cremita for the Dominican one.

When writing about Dominican cooking to an international audience, such as yourselves – we know from the response that we have an impressive range of nationalities and international locations amongst our esteemed membership – we often come across food and dishes names that mean one thing in one place and are meaningless elsewhere because they are known by a totally different monicker, or because they don't exist.

Let's try to unravel some of those.

The Dominican arepa is a spiced baked pudding made with cornmeal and coconut. Apart from its basic ingredient, there is not much resemblance between it and its South American namesake, the fried savory cornmeal patties that accompany almost every Venezuelan and Colombian meal.

All over the English-speaking world, a cake is a cake. In the Spanish speaking world, it can be a bizcocho (DR), torta (Venezuela), pastel or tarta (Spain), cake (Puerto Rico and Latinos in the US), or the hispanicized queque which is used by the English speaking communities that live on the Caribbean coast of Central America. In my native Gibraltar, where there is a comparable linguistic and cultural mix, we say quequi.

The Dominican moro (rice and beans) is congrí or moros y cristianos in Cuba and gallo pinto in Central America.

Another food name that could cause confusion is pasteles en hoja. In Spain they might think you mean the popular sweet pastry mil hojas (commonly known in English by its French name mil feuilles. Of course, pasteles en hoja are very similar to what are known as tamales in Central America and Mexico.

I will end with this adaptation of a classic song:

You say batata and I say boniato,
You say guineo and I say plátano,
batata, boniato, guineo, plátano!
Let's call the whole thing off!
(With apologies to Ira and Israel Gershwin).

Is there any word you'd like us to include, or a different name for these that you'd like to contribute: Please leave them in the comments, we'll come back to expand this article regularly.