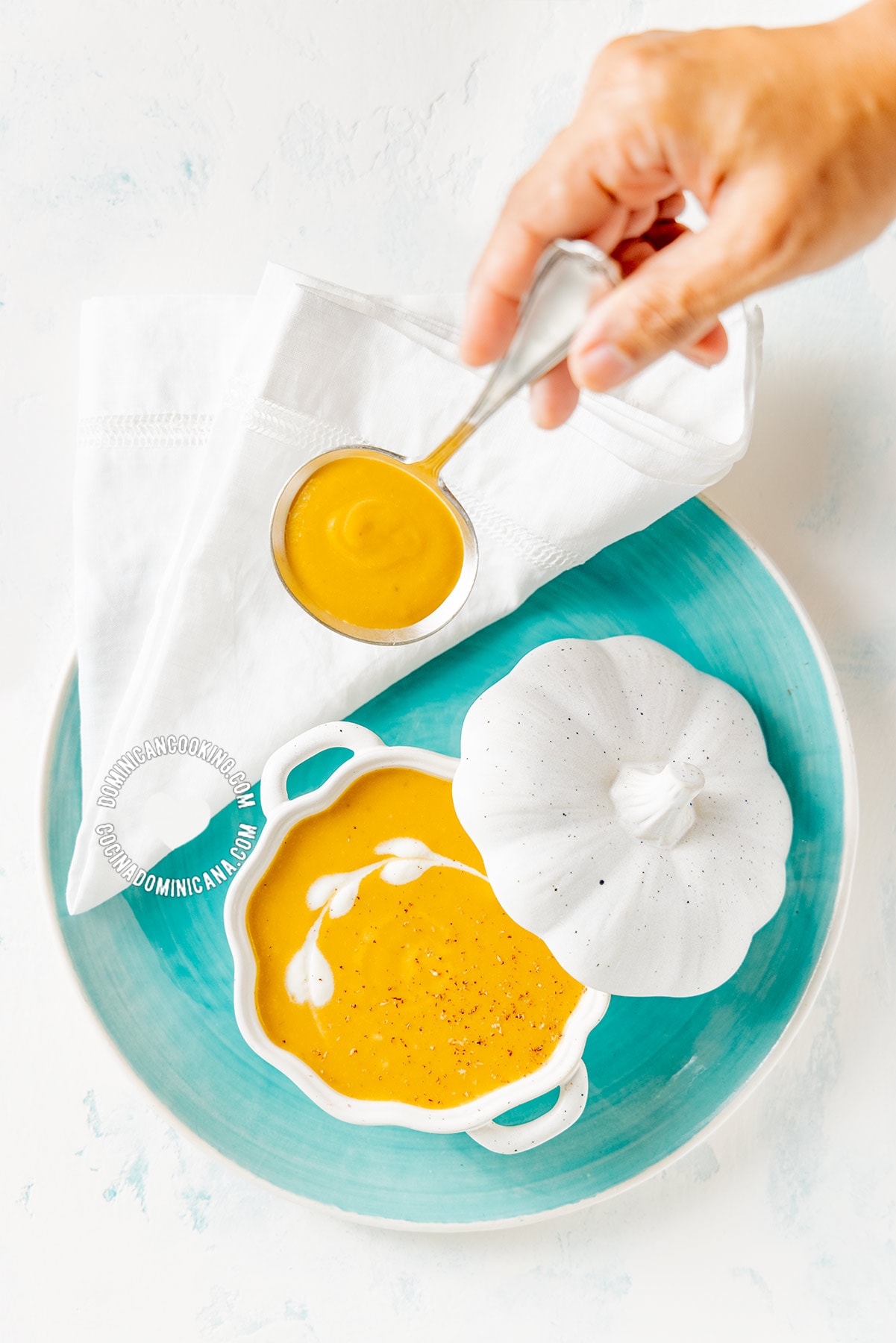 Auyama (West Indian pumpkin) is one of the most-used ingredients in Dominican cuisine. In these auyama recipes you'll find anything from breakfast dishes to desserts, and much more about this beloved healthful and versatile vegetable.

Auyama has a lot going for it as well as its subtle taste and versatility as an ingredient. Its color can range from pale mustard to bright orange. It breaks up easily when cooked, and the resulting creamy texture adds thickness to soups and stews, and it is very healthy food.

Auyama or calabaza (the latter as it is known in most of Latin America) is very popular in Dominican cuisine and used in many recipes. Here are some of the recipes with auyama.

Auyama appears in many of our dishes. The most popular auyama-based dishes are puré de auyama (mashed auyama), served with Dominican sauteed onions, and crema de auyama, a flavorful yet light cream of auyama soup.

At the same time, mashed auyama is an excellent baby and toddler food thanks to its gentle flavor, rich nutrients, and soft texture.

In neighboring Haiti, Soupe Joumou is a traditional New Year’s Day soup made with pumpkin. In Jamaica pumpkin can be found in curries and pies as well as in soups. Puerto Rico has pumpkin fritters with the curious name of barriguitas de vieja.

In the United States, of course, pumpkins are associated with autumn and are central features of Halloween celebrations in the shape of Jack-o’-Lanterns, and the Thanksgiving dinner favorite, pumpkin pie.

Auyama Dominicana is a type of pumpkin, West Indian pumpkin, to be exact. However, many other types of pumpkin and squashes are sold in the Dominican Republic under the generic name of auyama.

West Indian pumpkin, as its name suggests, is also common across the Caribbean region.

Auyama tastes like pumpkin, with a stronger flavor than most squashes. Pumpkin is nearly identical to kabocha squash, so the taste and texture are comparable.

Also known as ayote and calabaza squash, auyama is the name by which it is known in the Dominican Republic, Venezuela, and Colombia. Some also spell it ahuyama, but auyama seems to be the most commonly accepted spelling.

In Cuba and Puerto Rico it is called calabaza, the standard Spanish name for pumpkin. In Panama and much of South America, it is zapallo. Ayote is a Nahuatl word, while the word auyama is probably of Taino origin.

The proper name for auyama in English is West Indian pumpkin, but auyama is also used as the name for several varieties of pumpkins and squashes like Cucurbita pepo, Cucurbita moschata, and Cucurbita maxima (kabocha squash).

Kabocha squash is our recommended auyama substitute. Its flavor and texture are nearly indistinguishable from Dominican auyama.

Auyama is low in calories, fat, and carbohydrates, rich in vitamins A and C and potassium. If that were not enough, it is a relatively inexpensive foodstuff and it grows very easily.

Like their counterparts in many other parts of the Americas, the pre-Columbian inhabitants of Hispaniola are known to have cultivated and eaten auyama, which was unknown in the Old World before 1492. The earliest indications of the pumpkin’s arrival in Europe appear in early 16th century paintings and literature.

Dominican auyama is called West Indian pumpkin in English, but is also used as the generic name for a number of pumpkin and squashes that grow in the Dominican Republic.

This is a popular saying and bit of folk wisdom in the Dominican Republic that can be translated into English as "Only the knife knows the pumpkin's heart". It means that only those suffering an ordeal understand it fully.

Please share your experience cooking our Dominican recipes, and you preferred way to prepare auyama. And If you have any questions, please ask them in the comments.

Hey, fantastic information, and great re-design of the site. I was born in Santiago but moved at a really early age. I'm trying to 'reconnect' and learn how to cook some good food. Thanks for all your hard work!

I'm loving the new website Aunt Clara! This website is such a godsend, I've been suprising my DR born mother with recipies that she didn't even know I've heard of! Thanks a bunch!

Excellent information, Clara. I was born and raised in DR, all up to 3 years ago when I followed my passion to The CIA in NY...Love island food!