If you're used to the sweet peanut butter typically found on supermarket shelves, you're in for a surprise if you try ours. A pleasant surprise.

This is not like the supermarket peanut butter, as the title of this post suggests. This is a savory, spicy version. How spicy depends on each person's taste. I call it "peanut butter for grownups".

Mambá is not the name of a snake (notice the tilde/emphasis on the second syllable). The word is almost certainly of African origin; however, I am uncertain of the origins of the dish itself. The word for peanut in Congolese is muamba, with nearly the same pronunciation as the Spanish/Dominican word. As mambá is traditionally served spread on casabe it suggests that perhaps mambá is also a very old tradition. Since the word can be neatly traced back to African slaves of Congolese origin, the dish or something similar may have arrived with them.

Thanks to John, one of our readers, for pointing us in the right direction.

Mambá is also popular in Haiti where it is produced commercially, as a cottage product, and as a home dish. In the Dominican Republic though, it's either a homemade concoction or a cottage industry product. I have never seen it available commercially.

I have to say that I'm partial to our peanut butter - not only is it very flavorful, it's probably also healthier than the industrial version. And it's a staple of our frugal living strategy. It contains very few ingredients, most of which you probably already have in your kitchen, or can get at short notice.

Mambá is always a savory spread, never sweet, and some people like it spicy - this is also my preference. Others prefer to forego the spicy peppers. It is usually served with casabe (cassava bread), but if you don't have any at hand, rustic bread or toasted pita is a good way to serve it. 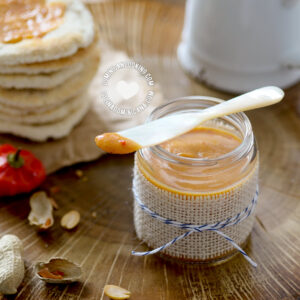 This mambá recipe is based on the ones I had as a child. As I don't know for certain what proportions were used in the ones we bought, I've tried to recreate it here. I like it rather spicy, so feel free to adjust this to your own taste. And yes, mambá is gluten-free. 🙂

READERS SEARCHED FOR are mambas gluten free, mamba peanut butter, savory peanut butter
More recipes with: peanut
Tried this recipe?Please review it, and tell us about it!
Edited: Aug 19, 2021 | Publish: May 31, 2011

Being a scholar and traveler, lover of cultures linked to Africa and Latin America. I can tell you that the word Mamba as it is pronounced in Spanish, comes from a Kikongo word Muamba/mumbe (moo-am-bay) which is literally peanut or peanut sauce/butter. In DRCongo or Congo they still have a… Read more »

OMG! It is so incredible to see the overlaps and similarities between Haitian and Dominican cultures. We definitely call it mamba tooooo! My cousin just brought some homeade jars from Haiti a couple weeks ago and its a different world than the peanut butter on the shelves here in the… Read more »

Is the pepper fresh or dried?

I wish my favorite blogger (you!) had a TV show.