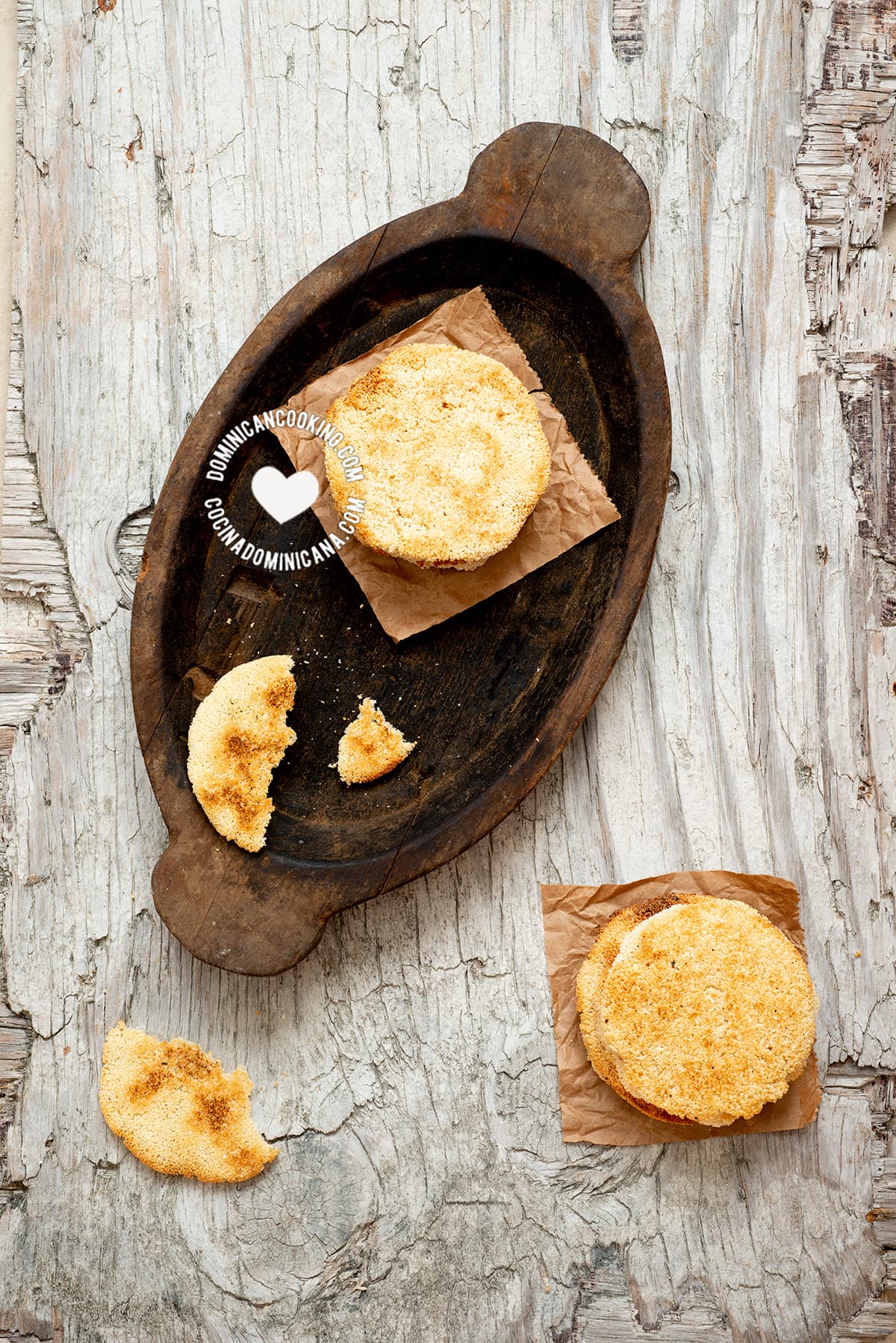 Casabe is the oldest dish in our culinary heritage and the basis of the Taino diet. Learn how easy it is to make this ancient food.

Casabe — a crispy flatbread made from cassava (yuca) flour – was at the center of the Taíno diet. Over 500 years later, casabe is still a popular food in Dominican households.

Casabe was one of the staples of the Taino diet. [1] Yuca and the knowledge of how to make this flatbread was brought here by the Taino from the mainland. It also spread to where other Arawak groups settled, in what is now modern-day Puerto Rico, Dominican Republic, Haiti, Cuba, and Venezuela.

"So important was this food to these indigenous people, that the main god in their pantheon was called Yocahu Vagua Maorocoti, which is roughly translated as 'Our Great Lord of Yuca'". [2]

When the Spanish first arrived on the island, they soon found that this food --which they called "the bread of the Indies" [1]-- had advantages over their traditional European bread, in that it does not go stale or moldy. For this reason, it is said that the conquest of the Americas was fueled by casabe, taken by the conquistadores from Hispaniola as they continued their push into Mexico and other parts of the continent [3].

To make casabe, the yuca has to be peeled, washed, ground up, compressed, sieved and then finally shaped into large circular molds and baked on a stone hotplate called burén (a Taino word) [2].

To make commercial quantities is not an easy task using the traditional method, which is more appropriate for producing the amount needed to feed a household.

Up till a few decades ago, casabe production was a dying tradition in the Dominican Republic. The ultimate cottage industry, it was restricted to several very small producers mainly in the northwest of the country, and distribution and sales beyond the local area were close to nonexistent.

Casabe was revitalized by enterprising producers like Nicolas Almonte of Casabe Guaraganó, who in the 1970s adapted this labor-intensive craft to a larger scale process where much of the production is done by machinery. This allows for increased volumes of production. Now other producers have followed suit and casabe is being produced on a much larger scale and being distributed to colmados and supermarkets around the country, as well as to overseas markets, especially the United States.

An additional benefit of the increased production is that it employs a significant amount of people – especially women – in rural areas, and acts as an incentive to keep people from migrating to the cities or overseas. Monción has a population of 14,000 and it is estimated that 4,000 or so owe their living directly or indirectly to this industry. Although the Monción area is home to many small and medium-scale producers, they are working together as a casabe producers association in order to promote the product.

The challenge for these producers is to increase the popularity of this grated cassava bread, which is still seen as a “humble” food. The producers also want to develop the image of casabe and turn it into a gourmet product for the domestic and international market. Many producers are making several varieties including garlic-flavored casabe, or as a dessert – a sweet casabe filled with guava or pineapple jam, and different sized ones such as ‘bite-size’ to serve with dips. They also stress its versatility and health benefits as selling points.

This ancient yuca bread is fat-free and rich in fiber, and although not formally certified, yuca is always grown organically. Despite being preservative-free, this yuca bread has a shelf life of up to eight months, as the Spaniards were so grateful to find[4].

How to eat it

Casabe is most commonly found served with mambá, the Dominican savory peanut butter, or with habichuelas con dulce, a uniquely Dominican dessert.

As with conventional bread, it can be also eaten at different times of the day, in a variety of ways. Most commonly for breakfast, served with coffee, it is also used to accompany soups and stews.

Other casabe foods include soaking it in water and serving it with fried eggs or avocado. It can also be baked and served with a sprinkle of salt and a drizzle of olive oil. For a light supper, accompany it with a mug of hot chocolate. It can also be used as a buffet food with dips, in the same way as tortilla chips, crackers, or pitta bread.

Why write a recipe for it? After all, Dominicans don't make casabe at home. So what possessed us to even try this?

A few months ago a reader (Hi Catherine!) wrote to us about her teaching some friends in Canada how to make casabe. She ended one the emails in our exchange with "Taino women would have been proud of me". They sure would, Catherine.

This exchange -- and Catherine's ideas-- inspired us to create our own recipe that could be made at home with modern kitchen implements. So go ahead, give it a try. And to make things a bit more interesting, we have added two options for flavored casabe that we hope you like. 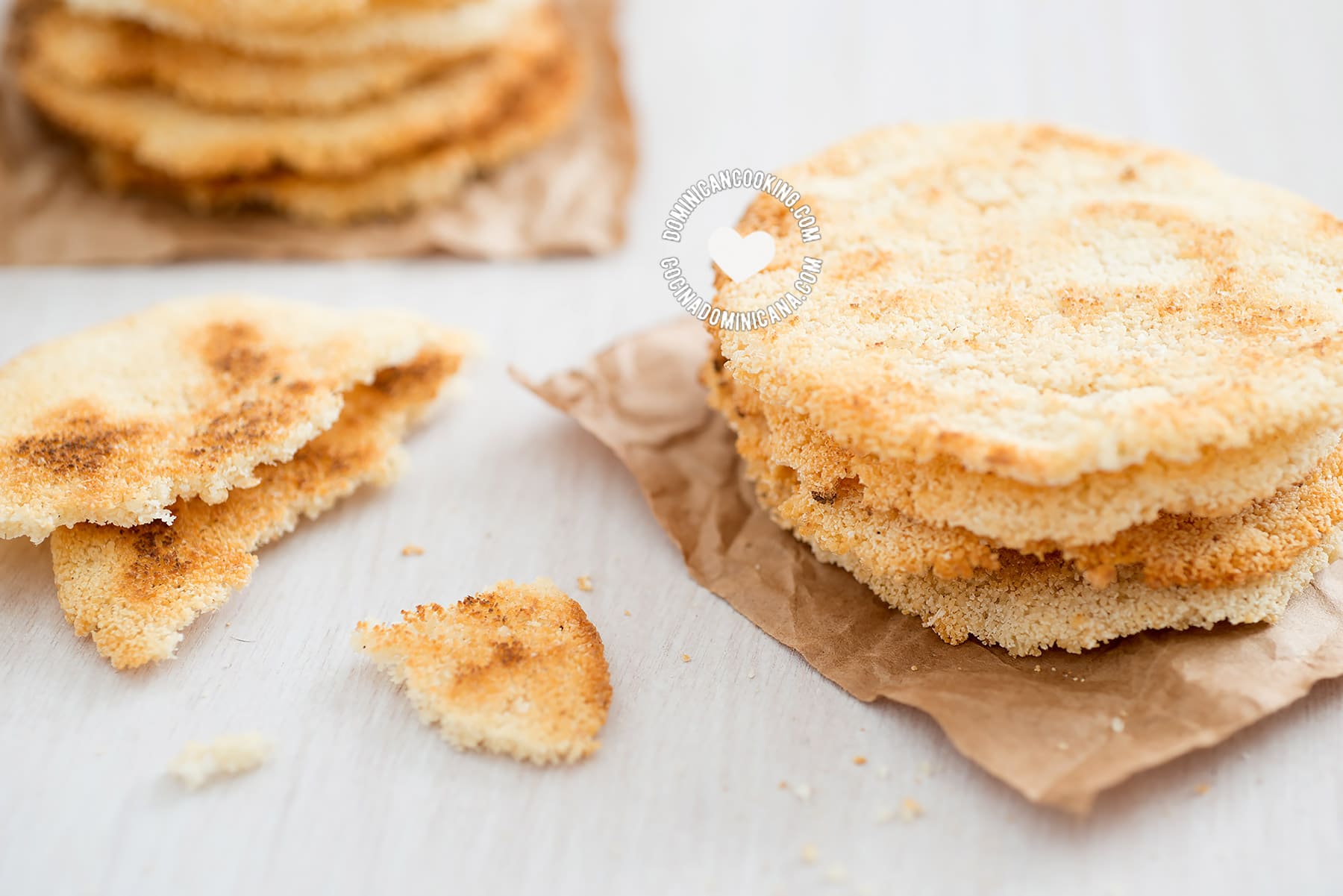 Use the smallest pan you have. I used a one-egg pan to make 12 single serving cassava bread. If yours is bigger, serving size may vary Aim for thin casabe - thinner casabe is crispier. Place in tight container and store in a dry place - it should keep for weeks, if not months. Nutrition facts are for plain casabe.

Part of the introduction to this recipe was published as a separate article in 2003 and expanded here.

(3) The Journal of Gastronomy. California. American Institute of Wine and Food, 1987. Page 47.