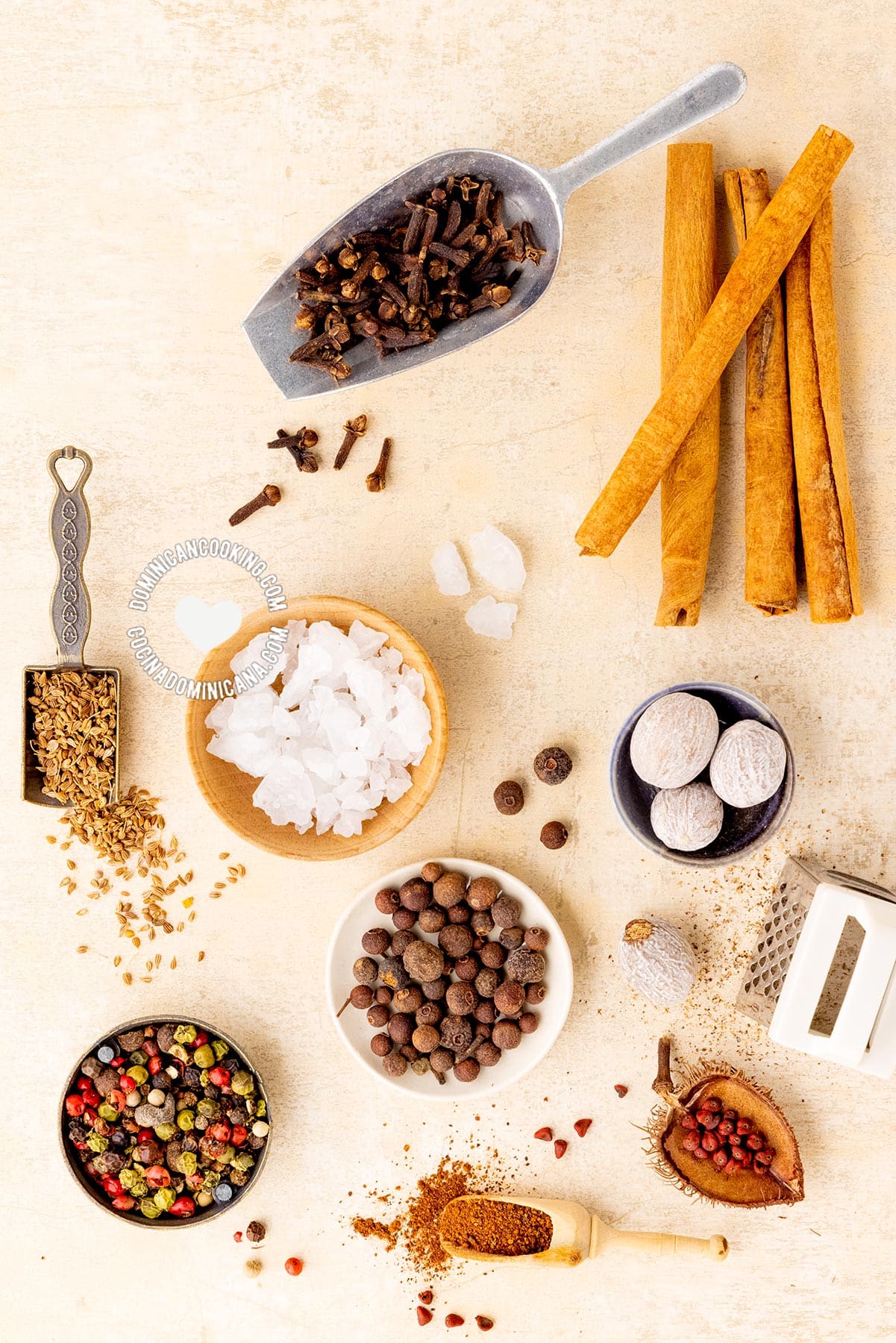 Each cuisine has its own distinctive combination of spices that gives it its signature flavor. These are the must-have spices in the Dominican cook’s pantry.

While in Denmark, I once found yuca (cassava) and decided to treat our family to the delicious arepitas de yuca. But lo and behold, the joy was short-lived because I could not find aniseed anywhere in the small town we were visiting. Despite my husband’s encouragement, and his insisting that he could not taste the difference, the arepitas were not the same without aniseed.

Each cuisine has its own distinctive combination of spices, and Dominican gastronomy is no different. So, what’s in (or should be) the Dominican cook’s pantry? Let’s see:

This is an orange-red condiment and food coloring derived from the seeds of the achiote tree. It is also called by local names such as achiote, bija, roucou (French Guyana), koesoewe or kusuwe (Suriname), onoto (Venezuela), atsuete (Philippines), or colorau (Brazil). In English, it is known as annatto.

In Dominican cuisine, it’s used mostly for coloring foods and as a healthier, more natural substitute to tomato paste. It has a very mild flavor and does not affect the flavor of foods significantly. I prefer using bija in pescado con coco. You can buy it powdered, or, as I prefer, crush it into powder, or extract the color by cooking in oil over very low heat to make achiote oil.

Known in English mainly as allspice, it is also called Jamaica pepper, pepper, myrtle pepper, pimenta, Turkish Yenibahar, English pepper or newspice, it is the dried berry of a tree native to the Greater Antilles, southern Mexico, and Central America. The name 'allspice' was coined as early as 1621 by the English, who thought it tasted like a combination of nutmeg, cinnamon, and cloves.

Pepper is the spice obtained from the dried fruit of a flowering vine native to India. It has been used and traded as a spice for millennia, and is used practically everywhere these days. The different colors of peppercorns are due to different processing methods or degrees of ripeness of the fruits.

In Dominican cookery it is used as a general seasoning agent, and since in our blog we avoid using processed seasoning and bouillon cubes, it is part of many of our savory recipes.

Cloves are the aromatic flower buds of a tree in the family Myrtaceae native to the Maluku Islands in Indonesia.

This spicy-sweet ingredient is vital in the preparation of many Dominican desserts. Dominicans buy them whole and leave them in the dish. I may be alone on this, but I love the tongue-numbing spiciness of biting into a piece of clove when I eat my arroz con leche or my pan de batata.

Anise, also called aniseed, is a flowering plant in the family Apiaceae native to the eastern Mediterranean region and Southwest Asia. It has a flavor that resembles that of star anise, fennel, and licorice.

As mentioned before, aniseed is mainly used in arepitas (yuca or cornmeal). It has a very distinctive flavor and I just cannot grasp the concept of a good arepita without a generous amount of aniseed.

Nutmeg, as is known in English, is the seed of a tree indigenous to the Spice Islands of Indonesia.

In our cuisine, it is used in various desserts and beverages (such as chocolate de agua). Also added to Dominican espresso in some households.

Cinnamon is the inner bark of several trees from the genus Cinnamomum. While Cinnamomum verum is sometimes considered to be "true cinnamon", most cinnamon available commercially derives from related species.

Like cloves, cinnamon is essential in preparing Dominican desserts. It is used in té de jengibre, habichuelas con dulces and other dishes. Buy them as sticks. A bit of powdered cinnamon also enhances a good dish of majarete.

Sea salt is widely used in our cuisine; it is cheap and easily available here. While in the past pure sea salt was commonly used in our home, nowadays iodized salt is preferred to prevent iodine deficiency and thyroid problems.

Many other spices are used in our cuisine, these are merely the best-known ones. Spices are also used for infusions, drinks, and teas. Let us know which of these are your favorite.

To learn more about what give our dishes their signature flavor, read our article on the herbs used in Dominican cooking.