Chimichurri (Dominican Chimi Hamburger) is a sauce-dripping burger made throughout the Dominican Rep. in street stands, each with their own recipe and flavor.

Visit the Dominican Republic, and you find them everywhere. These popular "carritos" dotting cities and towns are crowded by young night revelers coming from or going to the party. Everyone stops there to recharge with a fría and one of the quintessential Dominican street foods: El Chimi.

What is a Dominican chimi?

Chimi (short for chimichurri) is the Dominican hamburger, which shares a name with the famous Argentinian chimichurri sauce.

Two main characteristics separate the Chimichurri burger from other burgers. One is the bread (generally Pan de Agua, an inexpensive bun similar in texture to French baguettes). The other is using shredded cabbage instead of lettuce. And it never includes cheese.

Why are they called "chimichurri"?

The best-known food bearing the name chimichurri is the green South American sauce. This namesake of the popular Dominican sandwich is based on parsley, garlic, onion, and other ingredients. It is most commonly served over grilled meat.

Chimis are a relatively new addition to the Dominican culinary repertoire. Chimichurri (neither sauce nor burger) are mentioned in any of the old Dominican cookbooks I own. Perhaps digging into the history of this dish will yield some clues...

There is a widely-spread --and perhaps apocryphal-- story (1)(2) that credits the Argentinian cook Juan Abrales with the creation of the "proto-chimi".

Abrales, having moved to the Dominican Republic from Argentina, opened in the 70s a food cart selling Argentinian "choripanes" with chimichurri sauce. As time passed the name for the sandwich was shortened down to just chimichurri.

Chimi burgers are not usually prepared at home, but bought from street food stands. Each stand has its own recipe, seasoning, secrets, and fans.

It's impossible to find a standard recipe because there isn't one. Each vendor has a different way to make this, and a faithful clientele that prefers his/her chimichurri sandwich. This recipe will allow you to make Chimi at home with successful results. No wonder it is one of our most popular recipes.

Do you have a secret to make your own chimi shine? Share it in the comments! 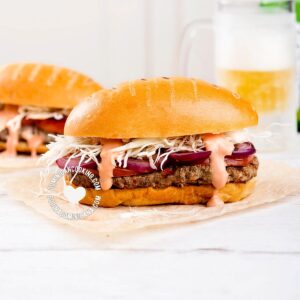 For the chimi sauce

Seasoning for the meat

What bread to use for chimis?

This sandwich/burger is traditionally made with pan de agua (a Dominican bread similar to mini-baguettes. If you can't buy or make pan de agua, use burger buns, because what else can you do if you really want some chimis?

Made chimis for the first time. It brought back some many memories of walking down the streets in Santiago.

Thank you for the delicious recipe! I made them and my family and friends loved it. I didn’t have a cold Preaidente but we had a cold Stella.

My Dominican chimichurris! These came out delicious! Thanks for the recipe Clara. Finally my American husband could try the real deal chimis. Needless to to say he loved them. I did change the recipe a smidgen...I used an Italian pepper instead of a bell, I used a Portuguese roll, they… Read more »

I'm Dominican and this is the way I remember a Chimi to be, back when I was living in DR. Not the ones they sell here in the US on the Dominican Food Trucks!. Thank you!

This be da tastiest burger in history! Yea