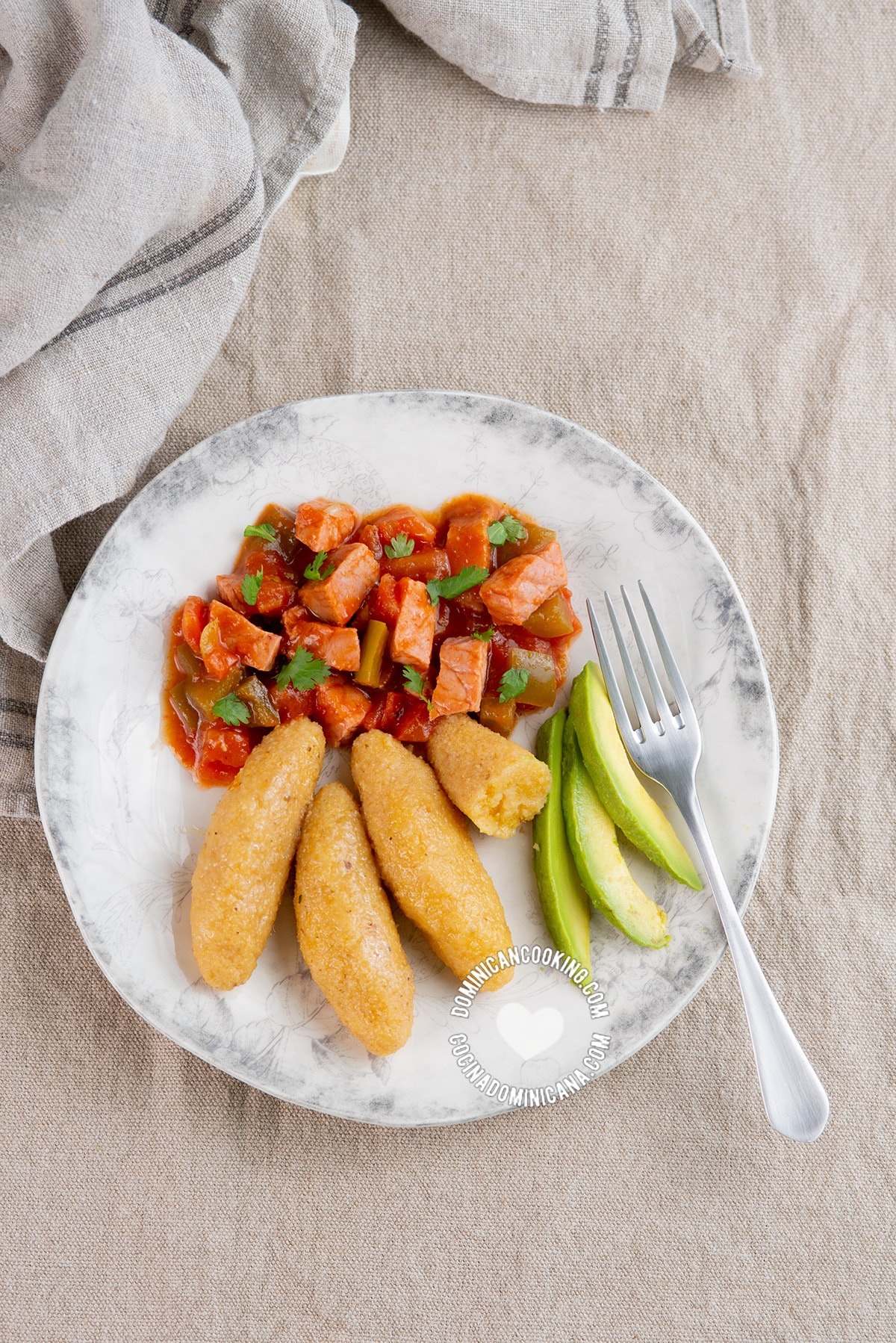 Craving some comfort food? Bollitos de Maíz (Boiled Cornmeal Dumplings) is a comfort dish can be served as a side dish or in our beloved sancocho.

Bollitos de Maíz (Boiled Cornmeal Dumplings) is one of our humble, comfort foods, a dish that can easily be forgotten amidst the plethora of other Dominican side dishes.

These dumplings are linked to the history of the Caribbean, and the immigration between the islands.

We have written more extensively about Domplines, the more common type of dumplings in our cuisine. These arrived in our country with the British island immigrants that came here to work in the sugar industry, and that we know as Cocolos.

Bollitos de maíz (by other names) are also popular in the British Caribbean islands, where they're found in a fried version, and a boiled one. Jamaican cornmeal dumplings are a staple of their cuisine. But this dish also exists in nearly identical form in Trinidad, and the Southern US, all places where our African ancestors had an important influence on the local cuisine.

These cornmeal dumplings are more commonly found as part of the Sancocho stew in many homes. This is how I encountered them the first time, but they are also served as a side dish, usually e some sort of guisado (stewed meat) with abundant sauce, but if you are making them to add to a sancocho, the recipe is just the same.

Bear in mind that these do not have the creamy, more pasta-like texture of domplines, even when well-cooked, these are closer to the consistency of a piece of boiled plantain.

This is not a dish that was part of my family repertoire, in fact, I first encountered it when I moved south to Santo Domingo. Bollitos de maíz --and "domplines" in general-- are more common in the south, as this is where the majority of recent inter-island immigrants settled.

This is a fairly standard recipe, and while there can be some variations between homes, it won't be a major departure from the one I present you. A popular version is bollitos con coco, but it's not the kind that can be added to sancocho, and we'll get to that recipe on another occassion.

One departure from the traditional version is adding flour to the mix, a trick I learned to foolproof this recipe (most of the time people have a problem with this recipe is because they break down in the water. Adding flour does not affect the flavor, but increases the cooking time.

If you have a different way of making and serving Bollitos de Maíz, I'd love to hear it. 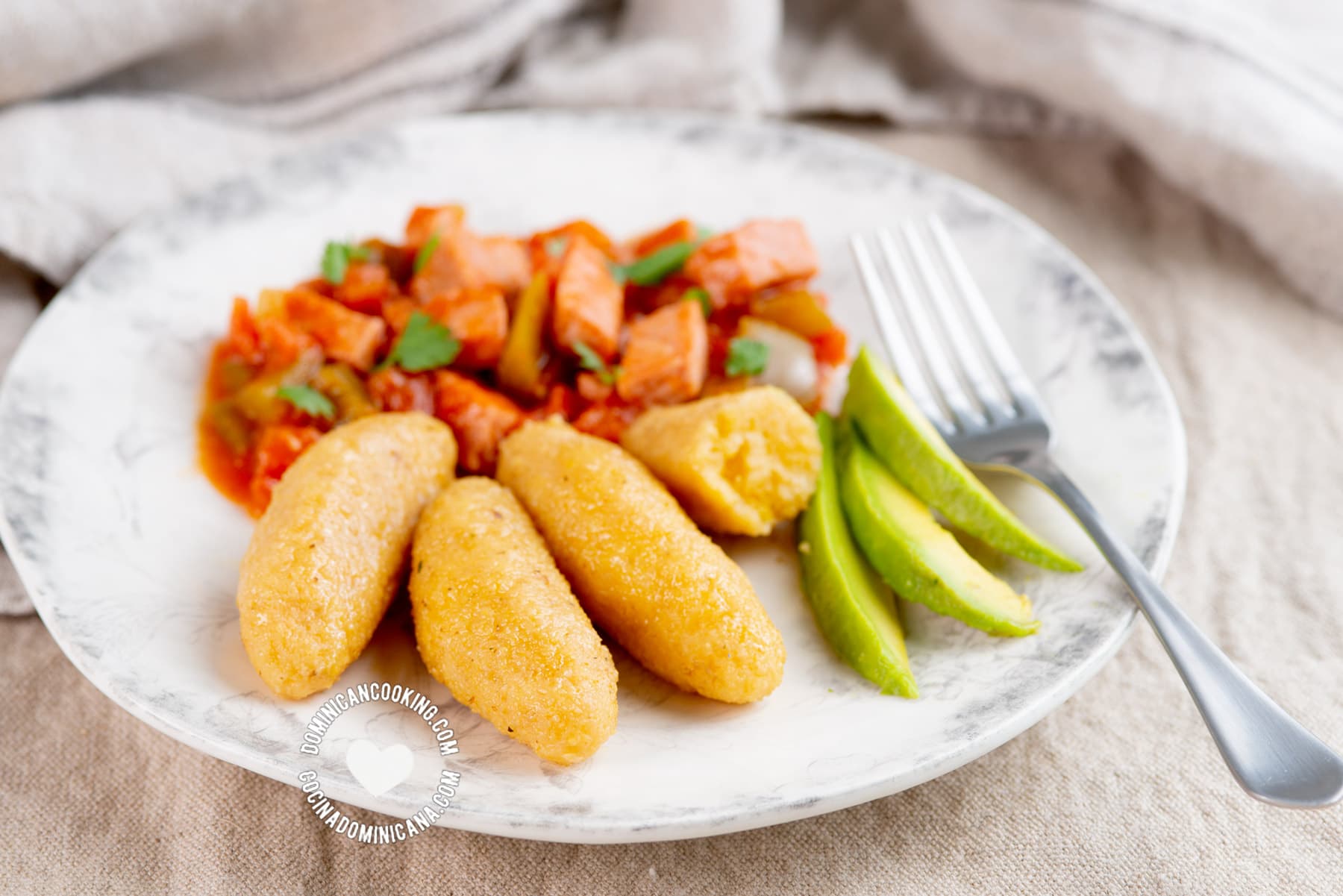 For a vegan dish use vegetable oil in lieu of butter.

Cornmeal is naturally gluten-free, but make sure that it is labeled as such because cross-contamination is a concern. A reader in the comments suggested that you can replace all-purpose flour with cornstarch (cornstarch), but this is a substitution I have not tested, and please make sure the cornstarch is also labeled-gluten free as it may also be cross-contaminated during production.

Substitute the ¾ cup of water for coconut milk. This is also a traditional variation of these bollitos, but I would not do this if you'll add it to Sancocho as it will affect the taste of the stew.

What kind of flour do you use in dumplings?

Find as fine cornmeal as you can.

Why do dumplings fall apart when cooked?

These will generally pick some of the color of the broth, so darker for darker broth, lighter for lighter broth.

I love this dish so much :-), but i never attempted to make it as my mother always made it for me. I love the taste of it with bacalao en cebolla. one thing I always find hard about this dish is that even when my mother makes then somethings… Read more »

Clara it´s true what Richard said, that was the way my Grandma used to cook it. She also added grated coconut and coconut milk, and that was ¡great!!!

These are very good with Puerto Rican style beans and with cod fish too.

Thank you for the recipe! it was exactly what I was looking for.