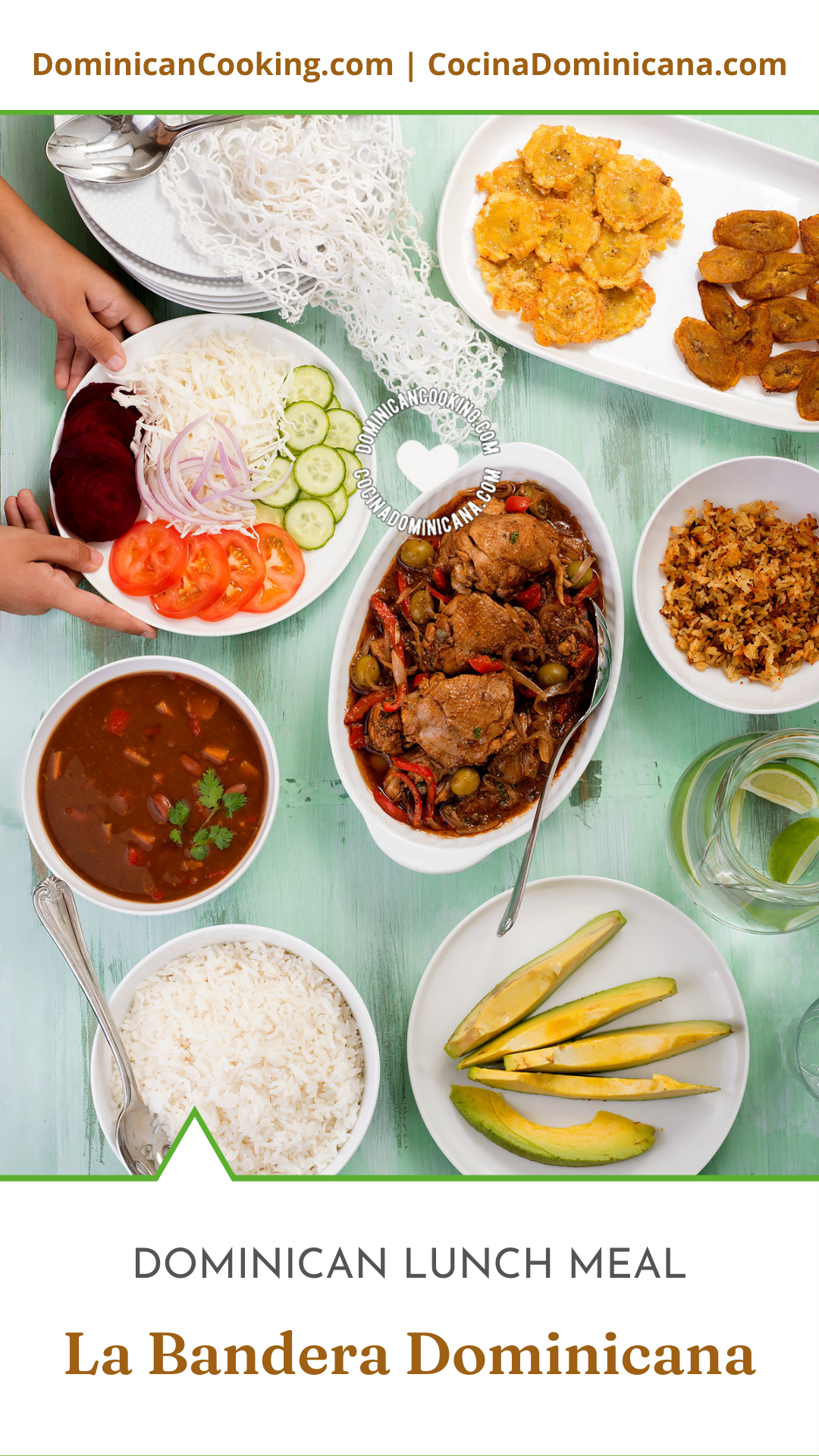 One of the first things that most visitors to the Dominican Republic will learn about Dominican food is that La Bandera Dominicana, or “The Dominican Flag,” is also what Dominicans call the Dominican national dish served for lunch throughout the country.

Lunch in the Dominican Republic is the most important meal of the day. La Bandera is the flagship of Dominican traditional food, a.k.a. la comida or el almuerzo, or even el plato del día, consists of rice, beans, and meat.

This simple link between the national flag and the basic lunchtime meal reflects how food in the Dominican Republic is a central part of the national identity, a source of pride and patriotism, and for the Diaspora, also of nostalgia.

What is La Bandera Dominicana?

La Bandera Dominicana is the tricolor Dominican flag with its distinctive red and blue opposing quarters, divided by a white cross.

Its namesake, La Bandera Dominicana food, is the Dominican national lunch meal. The red is represented by the beans, the white by the rice, and – with a splash of poetic and culinary license here – the meat – usually chicken or beef – represents the third color.

These are the dishes that are part of La Bandera Dominicana lunch meal.

Arroz blanco (Dominican rice) is the base of La Bandera, and a staple of most Dominican lunch meals.

There's always also Dominican salad to go with them.

Another possible addition is Tostones – fried green plantains, and Fritos maduros (fried ripe plantains) – and avocado and concón are always welcome. The typical lunch is usually accompanied by iced water, or some fruit juice if available.

It may be followed by one of our simple Dominican desserts, like Dulce de leche cortada – curdled milk fudge – or perhaps Dulce de piña – candied pineapple - and/or a strong, sweet black coffee, simply known as un cafecito.

If you want to get fancy and expand outside la bandera, beans can be substituted by Habichuelas negras (black beans) or Habichuelas blancas (white beans), or replaced by Guandules guisados (pigeon peas). Pescado guisado (Dominican stewed fish) or Cerdo guisado (braised pork) can take the place of chicken or beef.

And if you want to serve a vegan meal, try our Repollo guisado (stewed cabbage) as a substitute for meat, the rest of the dishes are vegan already.

How to make La Bandera

La Bandera Dominicana is not just a dish; it's a complete meal comprised of several different dishes that take some time to prepare. Dominican home cooks have this process figured out very early on.

To make Bandera Dominicana, we typically boil the beans well in advance and may even soak them overnight. Some home cooks may cut some time using canned beans, though we still prefer boiling dry beans because they are cheaper, and we favor the flavor. The beans are the first thing we start, usually at least a couple of hours before the meal is served.

The meat may be seasoned the prior night, but is generally cooked from scratch starting an hour or two before mealtime, depending on the type of meat you'll serve. So is the rice, which takes about 30 minutes to prepare. The salad can be made while things are cooking, and refrigerated until lunchtime.

Every Dominican household has its way of cooking these dishes. Most elements, flavors, and seasonings are universal, but others vary from cook to cook.

Keep in mind that each of the dishes in La Bandera requires plenty of details, so we have organized the ingredients below, but you have to check the individual recipes (see below) for extra information, tricks, and videos. 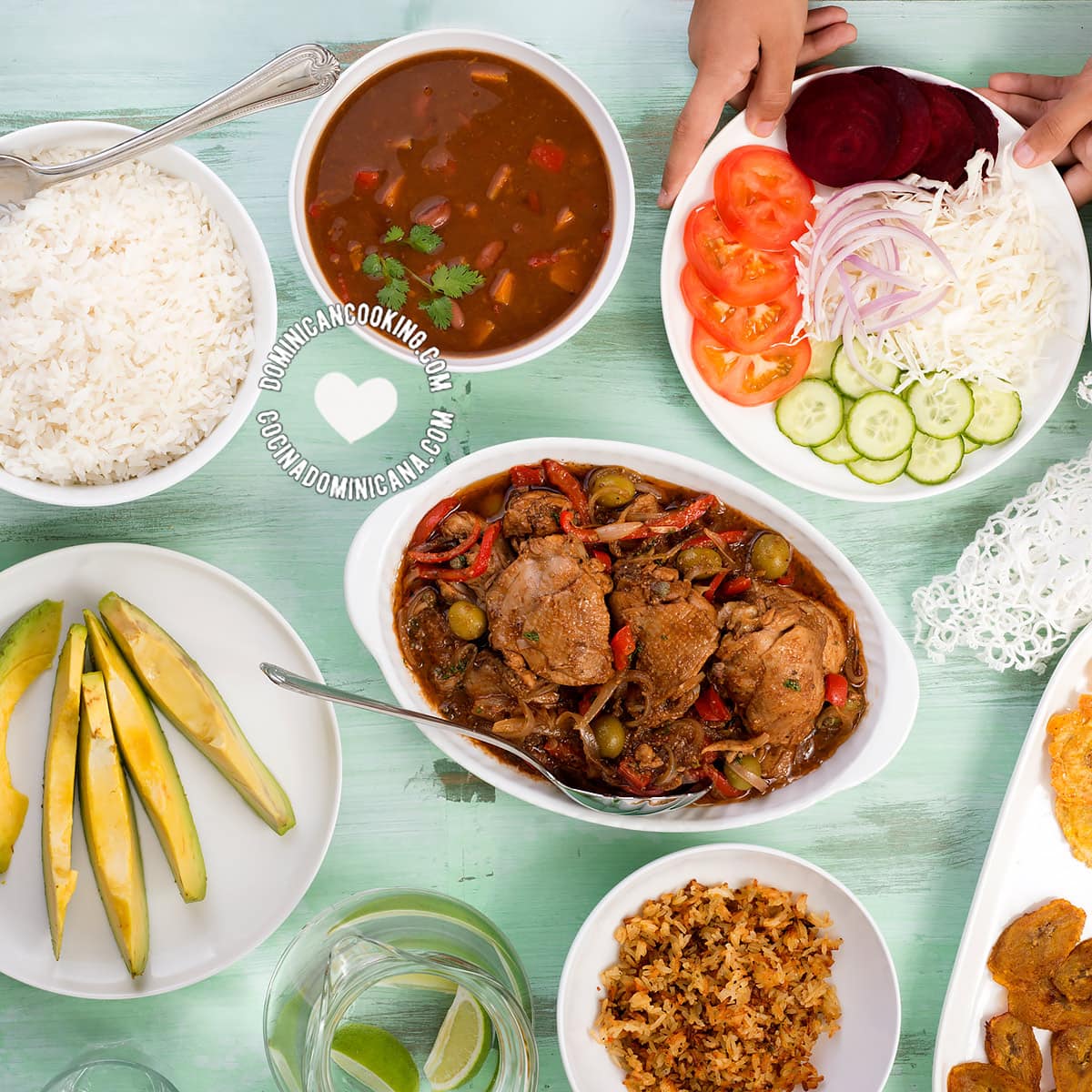 Nutrition calculation is a rough approximation.

Dominicans have also adopted other favorite foods as emblems of national pride. Plantains are enlisted to celebrate “plátano power” when Dominicans win international sports events, from baseball to Olympic track and field.

The la bandera nickname has led us to wonder what other countries call their plato del día. In some, it is simply called just that - “plato del día” – and “menú ejecutivo” is also quite common across the Spanish-speaking world. This is the case in several countries, including Spain and Chile, where the dish of the day is known as el plato del día or menú ejecutivo, or in Peru, where it is just “el menú”. In Puerto Rico, the standard lunch of chicken, rice, and beans is known as a “mixta”.

We discovered that Ecuador is another country that calls the generic lunch dish “la bandera”. This appears to be based on the same premise as its Dominican cousin – three traditional foods loosely representing the three colors of the national flag, in this case yellow, blue and red.

In Venezuela, the dish of the day is known as pabellón criollo. Pabellón also means flag, so this too is close to the Dominican bandera. The components of pabellón are not a million miles away from it either, with white rice, meat, refried black beans and fried ripe plantains – four components somehow representing the three colors of the Venezuelan flag.

Mexico has the comida corrida, a meal consisting of several courses: soup, main dish, and dessert but it varies greatly according to the region. In Colombia, they have the corrientazo, which literally means an electric shock, derived from the more sedate sounding “almuerzo corriente” or set lunch. The corrientazo usually starts with a soup or fruit, a main dish – beef, chicken or fish accompanied by rice, beans, plantains and salad, and dessert. However, unlike the Dominican and Ecuadorian banderas, Venezuelan pabellón and Puerto Rican mixta, these names refer to complete meals made up of several courses, not to one combined dish.