Mondongo (Dominican tripe stew) might not be some people's cup of tea, but in the Dominican Republic, it is a very popular dish.

We once took a poll amongst our readers called "Mondongo (Tripe Stew): Yucky or Yummy?", which sparked in me some reflection. My money was on a landslide victory for the Yuckies. I admit it, I voted more than once, in order to better register my opinion on the matter.

The Yuckies lost. By a lot.

For those innocently unaware, tripe is a cute name for cow, pig, or goat intestines (stomach, intestines, and honeycomb tripe), a supposed delicacy, usually boiled or stewed. Mondongo is the name for tripe in Spanish, Dominican Spanish that is. Elsewhere it is called callos, menudo, and other equally non-descriptive names. Tripe is also known as chitterlings in certain parts of the US.

Although in my opinion of little esteem it resembles a smooth mass of rotini-shaped viscera in form, and a worn rubber bicycle tire in texture, it remains a savory delight to many others and in more countries than I can imagine.

Mondongo soup is not unique to the DR, and although it is by far the most popular edible innard, it is not the only one. Butifarra, bofe, and pico y pala are some other beloved names designed to mask some Dominican food’s dubious origins.

Whether you're a fan or not, it doesn't really matter, this sopa de mondongo is very popular amongst Dominicans and the occasional adventurous foreigner. This is Aunt Clara's family recipe, but everyone swears by their own secret ingredient and method, so there are about as many recipes as there are Dominican home cooks.

There are some versions where it is mixed with pork or beef trotters, but we have a separate recipe for the solo dish. Some call a mixture of these two dishes "Patimondongo", a mouthful, in more than one sense.

Different vegetables are added to Mondongo depending on the cook's taste, and family tradition. Is your Mondongo recipe different? We'd love to hear about it. 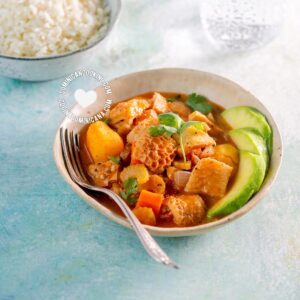 By: Clara Gonzalez
Mondongo Soup (Tripe Stew) might not be of the liking of many people, especially outside the Dominican Republic, but in the DR it is still very popular.
4.95 from 19 votes
Save for Later Send by Email Print Recipe
Prep Time 1 hr
Cook Time 35 mins
Total Time 1 hr 35 mins
Course Main Course
Cuisine Dominican, Latino
Servings 4 servings
Calories 560 kcal

Mondongo (tripe stew) is made from either beef, pork or goat. The first two are easier to find, thus more common. As we mention above, mondongo refers to any or all of stomach, intestines, and honeycomb tripe. For this recipe, I have used honeycomb tripe because it's easier to find. The same process will be used if you add or substitute these cuts. The honeycomb should be cleaned and bleached before starting, this is already done if you buy it in the supermarket. For extra precaution and peace of mind, you can scrub with salt and white vinegar when you wash it, then rinse it thoroughly. I did not do this for the video because I didn't find it necessary. Bear in mind that any surviving germs will be killed during the lengthy cooking process. I am not entirely sure why, but I have found that the boiling process varies wildly every time I make this. Sometimes I have it boiled tender in less than an hour, one time it took four! I don't know how long this will take for you, so do this in advance if you're cooking for guests.

Thank you Clara for your wonderful recipes I followed your directions and it came out very delicious muchas gracias.

This recipe was excellent! no need to add any industrial seasoning as with all of the vegetables and spices is more than enough for making this delicious Mondongo. The only thing I replace was the potatoes for pumpkin "Auyama".

I love this recipe and is easy to make. 👍