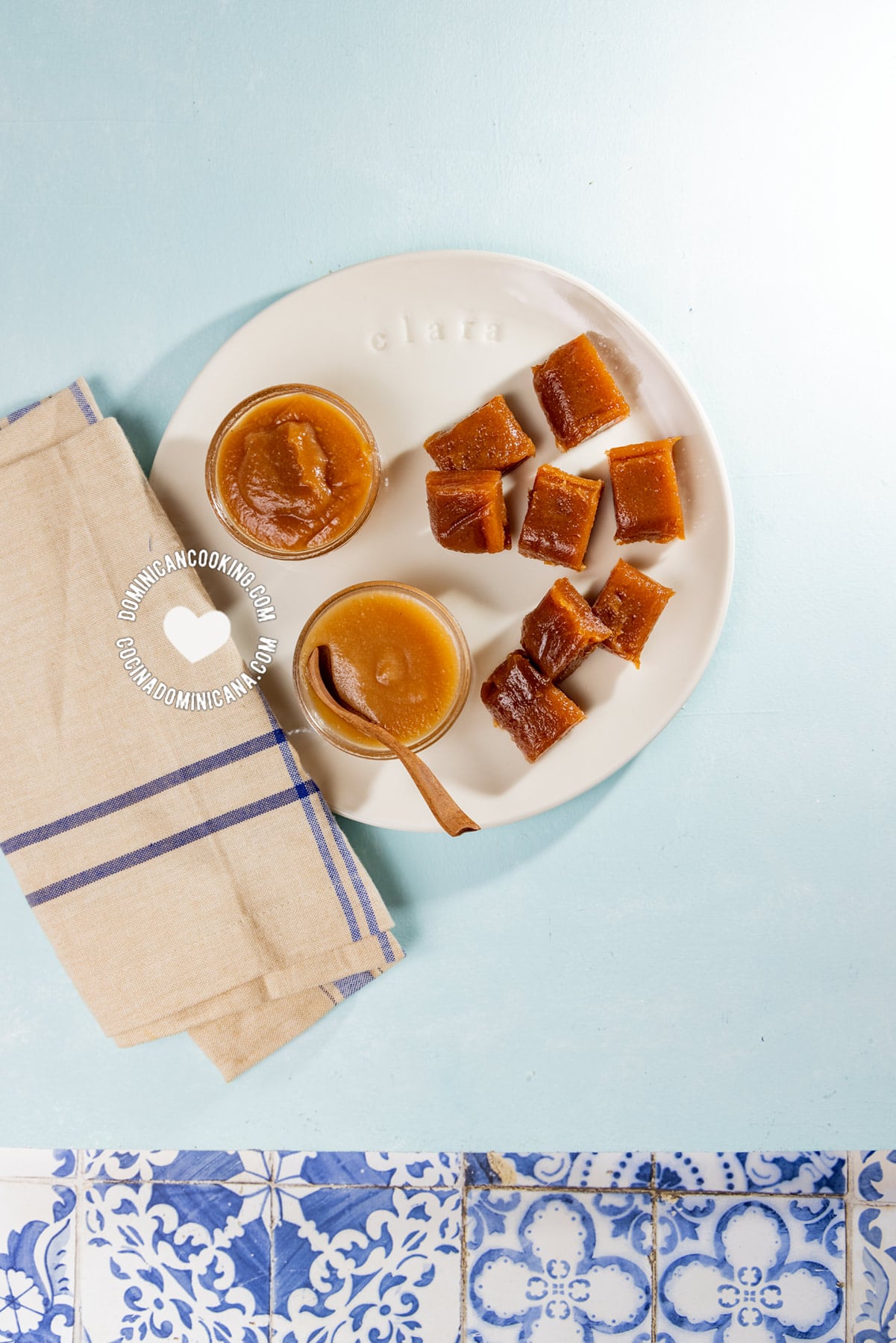 We had a guava tree in our backyard when I was a kid. The fruit was the most common variety at the time - reddish, small, but very sweet. It was perfect for making Dulce de guayaba (guava jam).

Discover why we love so much this versatile dessert, and how you can make three different products with the same recipe and ingredients.

Guava is a popular fruit in the Caribbean. It's used here to make several desserts and also served in refreshing juices.

Guava is rich in pectin, a naturally occurring thickener. This is why we can reduce guava sauce until we can make it into a molded brick that can be cut into cubes.

Guava paste (or pasta de guayaba) is a sweet heavy paste made from the guava fruit.

Pasta de guayaba (guava paste candy) is very simple to make, requires few ingredients, and is very popular in our country, as well as Cuba, Puerto Rico, and Central America.

How to serve guava paste

Guava jelly or paste can be served as a candy, or as stuffing for baked guava desserts like guava pastelitos, in sweet empanadas, or fried in pastry as an appetizer to go with a cup of coffee. It is also served with cheese (queso blanco, queso de freír) on a cookie cracker as a snack. It's excellent baked wrapped in puff pastry.

Dulce de guayaba (guava jam) is a thick guava jam that can be served as a standalone dessert but is most commonly used as a filling for cakes, pastries, guava pies, and other desserts. It's produced using the same method as guava paste, only not reduced as much.

What to do with guava jam

Guava jam can be made into a sweet and savory bbq sauce, perfect with chicken pinchos or pork chops, as a cake filling, or as a topping for a guava tart. Add some strawberries when you make it, and make magnificent guava strawberry jam thumbprint cookies.

Guava sauce is made from guava pulp, boiled, blended, sweetened, and reduced to a thick sauce that can be drizzled over other desserts.

After guava paste and guava jam, guava casquitos are the best thing you can make with this fruit (although there is competition with guava juice). With dulce de guayaba I also made a delicious guava BBQ sauce that you will love.

Another of my favorite guava recipes is a guava and ricotta cheese pie that is a hit every time I make it.

There are several varieties of guava; each will make this dish slightly different, but in the end, pick the one you can find at your local supermarket or market. I personally prefer the small, pink ones, but these are not the type of guava that lends itself to mass production and sale, as it has to be picked ripe and spoils very fast and so are hard to find.

To make this recipe, you need fresh guavas. Using canned or jarred guavas is not recommended. I have only got good results using fresh fruit.

This recipe yields about 4 cups of guava sauce, around 2.5 cups of guava jam (dulce de guayaba), and nearly two cups of guava paste (pasta de guayaba). The quantities will vary depending on the guava you use. As some guavas have more pectin than others, it's impossible to predict the exact yield. 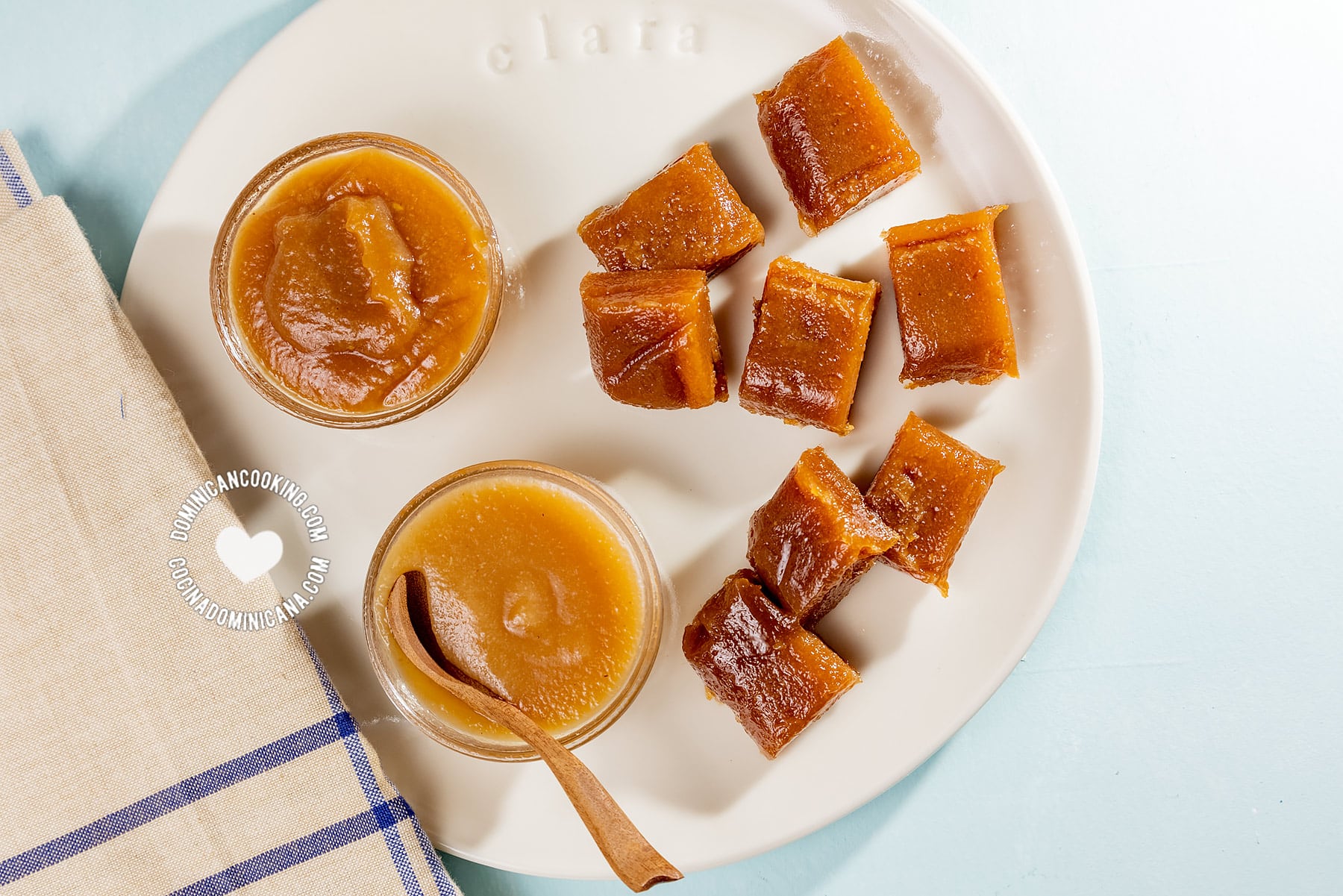 How to make guava jam?

Guava jam is made by boiling guava fruit and sugar to reduce to a thick paste.

How to make guava jam from guava paste?

You can dissolve guava paste into small amounts of boiling-hot water – starting with a tablespoon of water – until you get the consistency you want and a smooth texture.

How to make guava jam without pectin?

You do not need to act pectin to make guava jam, as pectin naturally occurs in guava and guava jam thickens very well without it.

How to make guava paste?

To make guava paste you keep boiling guava jam until it has thickened enough that it lifts from the bottom of the saucepan. It is then left to cool to room temperature in a mold.