Baked Kibbeh (Kipe) is lighter than traditional fried ones, I find it more flavorful and moist, and easier to make for beginners.

Nearly two centuries ago a wave of immigrants from the former Ottoman Empire found its way to America (the continent), fleeing persecution and economic hardship. With them they brought bits and pieces of the rich cuisines from a territory that surrounded most of the Mediterranean, and the Red and Black seas.

Kipe / quipe (the Dominicanized version of the Middle-Eastern kibbeh), is one of those culinary treasures. You can find kibbeh from Northern Africa to the Middle East, and everywhere their inhabitants have emigrated to, which includes most of Latin America. The most common version in our country is the fried, bullet-shaped one; but the fact that I have been asked many times to include this one in our recipe collection tells you that the love for the baked kibbeh has not been lost.

Kibbeh, kubbeh, or kokeba all mean "the shape of a ball" in Arabic. Indeed, this is how they started. [...] For generations of  Jewish and Arab Women being able to make nice kubbeh was considered one of the basic requirements of a "good" domesticated woman; a test of their refinement and elegance. A less arduous version--why hasn't anyone told the poor women--is kibbeh b'siniyah, where the casing and the filling are layered in a dish to form a pie.

But how does a Dominican with no discernible Middle Eastern heritage write the "right" recipe amongst thousands of versions of a dish of disputed provenance? The same way I do with every other recipe here: I make them the way I like them, and cross my fingers you'll like them too.

To be honest, I didn't find making this dish that much easier than the traditional fried kibbeh, perhaps because I have made the other one many times, and can make them in the right shape with my eyes closed (exaggeration warning here!). But if you think this kibbeh is any less flavorful or has anything to envy the other one, you'll be surprised. This one has an even more complex mixture of flavors and textures. And I would take it any day over the fried ones.

Notice also that Middle-Eastern kibbeh is made from lamb, a meat that is noticeably absent from Dominican cuisine. I have found that, as a general rule, Dominicans dislike lamb and prefer its cousin chivo (goat). The Dominican kibbeh is made with beef.

Many a recipe for baked kibbeh called for a food processor. I am a fan of food processors, but I wanted something more "affordable" for the beginner cook, and I also love the texture of the "whole" bulgur. This worked just perfectly for me. 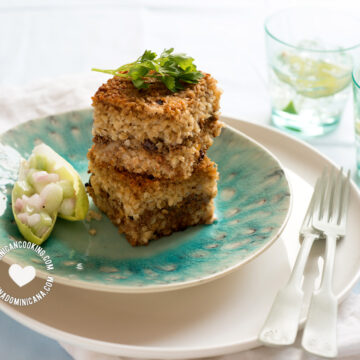 By: Clara Gonzalez
Baked kibbeh (baked kipe) is lighter than traditional fried ones, I find baked kipe more flavorful and moist, not to mention easier to make for beginners.
5 from 1 vote

Bulgur is sometimes sold under the name Coarse Bulgur Wheat [Amazon affiliate link]. It would not be hard to find in Middle Eastern and Latino communities.

A friend of mine keeps posting these recipes on facebook and while I love knowing that they're all on-line, I would really love to have all this in a book - with all the stories. Has a book ever been published?

Hi there
Is there a gluten free version of this recipe? Just diagnosed with Celiac disease.

Can this be made ahead?