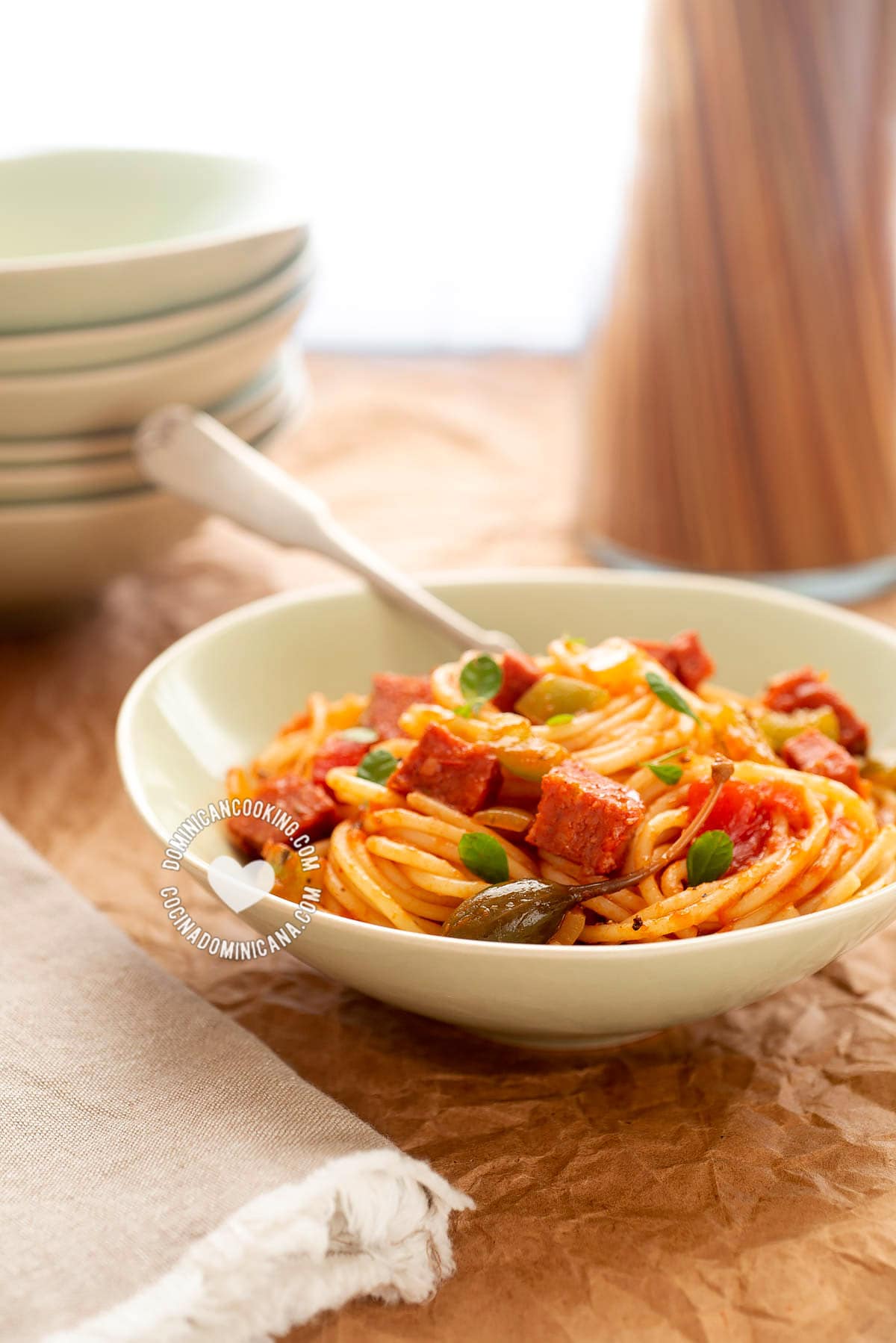 I am pretty sure everyone looking for our espagueti, or Dominican spaghetti recipe is coming here because they have tried it and cannot get it out of their heads, or they miss the flavors of home. Make them and surprise your family with our awesome dish. Be prepared for encores.

Dominican espaguetis can shock many foreigners who have never tried it before. Although it's not the only Dominican spaghetti dish that breaks some rules (looking at you, Pastelón de Espagueti!), this is a dish not without merits.

Dominicans love Dominican spaghetti, and they are – alongside Pescado frito, Batata frita, and Yaniqueque – the quintessential beach day meal. Plentiful, flavorful, and inexpensive, there's much to love about it.

Spaghetti a la Dominicana is a traditional Dominican dish made with Dominican salami, a tomato sauce with vegetables, and – at some homes – evaporated milk.

But I'll let a Canadian friend tell you her experience with Dominican espaguetis:

"I was caught off-guard the first time I was served a plate of Dominican espaguetis, having always been accustomed to my pasta al dente, a la italiana. [Keep reading...]

I love Dominican spaghetti on its own or with Tostones. But there's no beach trip without large quantities of espagueti and a bag of Pan de agua at hand to go with it, or a big pot of rice even to feed the crowd.

Not two homes have the same Dominican-style spaghetti recipe, so as always, here we'll go with my family's recipe, which you can adapt and modify to your taste or family traditions.

Let us know more in the comments about your own Dominican spaghetti recipe. 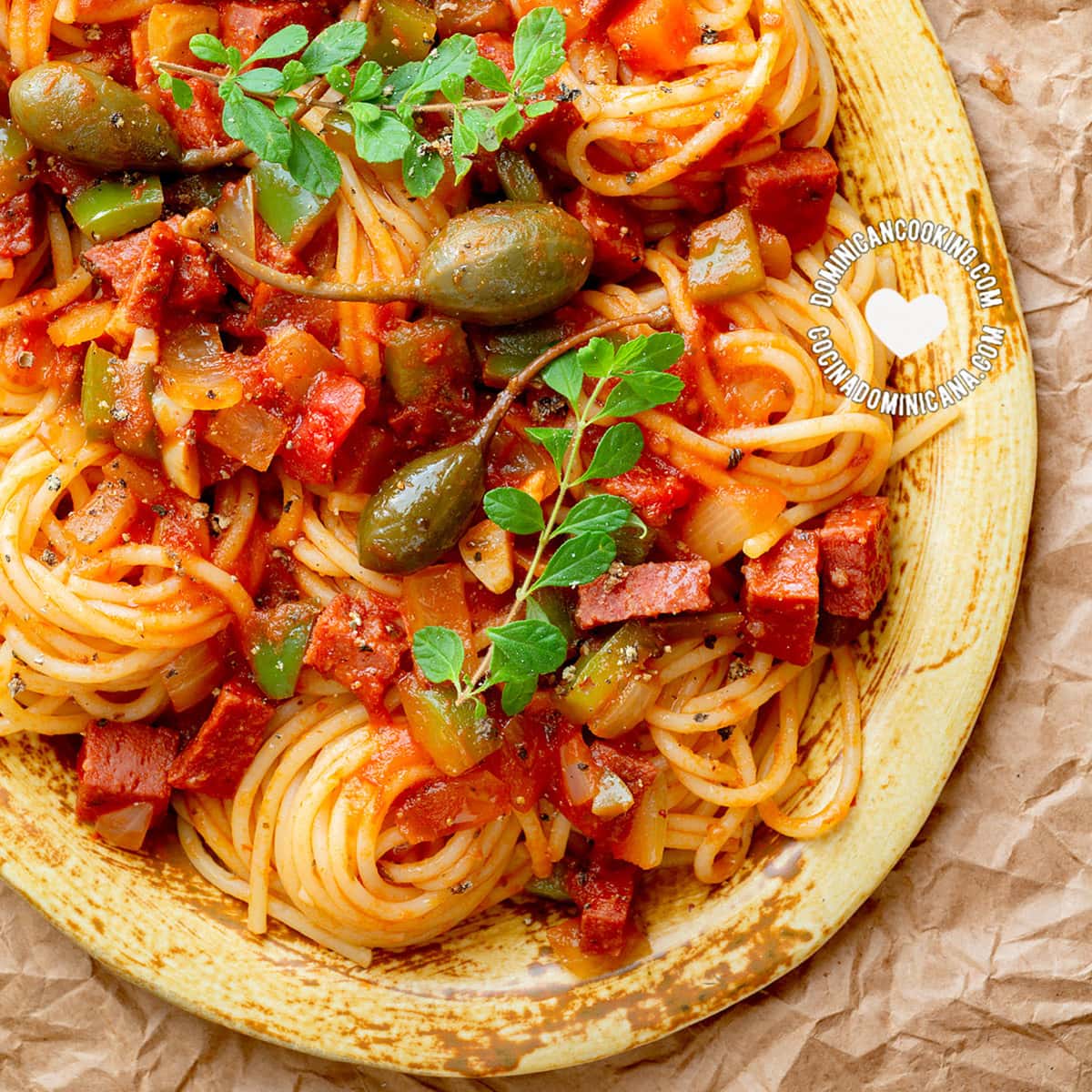 Do not add vinegar if you are using milk. Both ingredients are optional, as there are no two homes where this dish is made the same. Both versions have their fans, I love both.

Well. This spaghetti was positively bathed in an orange gleam of oil, with shards of green peppers, chunks of salami, and, of all things, vinegar (!) thrown into the mix."

But a bigger shock still was to see the spaghetti sharing a plate with a mound of rice. Where I’m from, spaghetti takes second stage to no other cereal, and carries a meal on the shoulders of its own multifarious merits.

As far as I was concerned, this was nothing less than blasphemy.

I shunned los espaguetis for a long time, turning my nose up at the incognito noodles. Until one day, we loaded up the truck en route to a velorio (or wake) for one of my husband’s relatives in the campo. It took us longer to get there than expected, and when we did, we discovered that the food had run out. Starving, we were given the keys to an aunt’s house, where we proceeded to whip up something quick for our rather large group of children, elderly, and your basically famished adults. The nearest colmado, however, could only offer us one option for an economical and plentiful meal: espaguetis.

Hunger having weakened my resolve, and for fear of appearing the spoiled gringa in the campo, I had no choice but to cease and desist my anti-espaguetis campaign. With a tinge of picante, procured in the form of hot peppers straight from the auntie’s garden, and no rice to upstage the star of the show, I found myself enjoying spaghetti in a whole new way. I think I ate two plates.

If a moral were to be attached to this story perhaps most apropos would be: never judge a spaghetti by its sauce. Or, ask yourselves, what’s in a spaghetti? A spaghetti by any other cooking method would still taste as sweet. Okay, well, not sweet, per se, but just as good. Different, but good. That’s it – ¡viva la diferencia!

How to make Dominican spaghetti?

Dominican spaghetti is made by browning Dominican salami, and cooking it in tomato sauce along with herbs, spices, and vegetables, then adding the boiled spaghetti.

How to make Dominican spaghetti with chicken?

You can use supermarket rotisserie chicken instead of salami in the Dominican spaghetti recipe.