Dulce de Leche Cortada , or Cortadito de Leche (Curdled Milk Fudge) is a delicious dessert with a touch of sour that we all love.

It is pretty amazing that when people miss their country's food it is rarely the "refined" foods that make their eyes water. It is always the simple pleasures that make our heart go pitter-pat. Simple pleasures like Dulce de Leche Cortada Recipe (Curdled Milk Fudge) --or as we also know it, Cortadito de Leche.

Afar from La Tierrita, people get misty-eyed for the rare fruits that are nearly impossible to find "allende los mares", we long for a cup of strong, aromatic Dominican coffee, and crave a plate of rice. Everyone craves a steaming plate of rice 3 to 5 days after leaving the country. It's a rule.

It is because our blog is so popular outside our country that we write --sometimes very lengthy-- introductions to our recipes, why we expound on their cultural significance, their history --when available-- and the many ways they're prepared at home.

And when we include non-traditional changes to the recipe, we make sure to tell you. It is never a gratuitous change, I always think my changes improve in some way the traditional method, whether to make it easier to reproduce with modern cooking equipment and ingredients, or to improve the dish itself.

Speaking about changes: traditionally this is a very simple dish. The bare basic one just has curdled (soured) milk and sugar. It is a way to use spoiled milk that would be otherwise not fit for consumption in the days prior to refrigeration, and when in the campos milk was consumed unpasteurized. Since I never have spoiled milk around, this method (adding lime juice, an acid) works in a similar manner.

I wish I could give myself credit for this, but this is a somewhat old "new" take on this tradition. I've eaten this dish made this way countless times. Each ingredient in it is something I've tried before made by other Dominican cooks.

And yes, you can do this without the eggs (this is a non-traditional addition), but the texture is very different. The eggs make for soft, "custardy" chunks, while without it they are more chewy and dry. I definitely prefer the egg version. 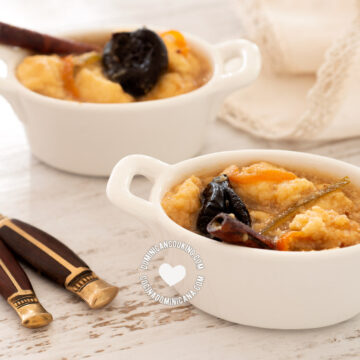 And yes, you can do this without the eggs (this is a non-traditional addition), but the texture is very different.

Thank you for the wonderful recipe! My mother has always made it but today I looked in my fridge and saw that my milk was expiring today but there was so much I felt guilty throwing it out. My kids had never tried it and loved it. I did keep… Read more »

Love this recipe. You have great Dominican recipes. Yours are authentic. Thank you

Love your recipes! They take me back to when I was a child in Santo Domingo, my grandmother had a similar style of cooking like you 😉