If you are looking for a different salad, easy to make, and very popular, we invite you to try this colorful Tipili (Dominican Tabbouleh).

JUMP TO: show ↓
1. Why we ❤️ it
2. History of Tipili (Tipile)
3. The immigrants from the Middle East
4. Middle Eastern influence in Dominican cuisine
5. About this recipe
6. Recipe

Tipili -- or Tipile -- is the Dominican name given to the local version of the iconic Lebanese salad called Tabbouleh based on wheat, tomato, onion, and parsley.

Let us tell you the story of Tipili (Bulgur Salad), and how it arrived to our shores.

Immigrants from the Middle Eastern region, mainly from Syria, Palestine, Lebanon, and Egypt came to the Dominican Republic and other Latin American countries in the late 19th and early 20th century.

They brought with them many dishes that went on to be incorporated into our culinary heritage. Tipili is one of them.

The immigrants from the Middle East

At the time, most of the Middle East and parts of Eastern Europe were under Turkish rule as part of the Ottoman Empire until its defeat in the First World War. For this reason, Latin Americans of Middle Eastern origin are sometimes known by the generic label turco to this day, even though few or none actually came from Turkey proper.

As in other parts of Latin America where businessmen like Mexican telecommunications mogul Carlos Slim and former Argentine president Carlos Menem – both of Middle Eastern origin - are household names, the Middle Eastern community in the Dominican Republic has flourished, mostly in business with a considerable number in the arts and in politics. Although relatively small in numbers in terms of percentage of the population, their presence is highly visible. Prominent families in Dominican political, society and business circles include Lama, Dauhajre, Khoury, Raful, Haché, Najri, Sued, Abinader, Nader, Brache, Zaglul, and many more.

The Middle Easterners also brought over their culinary tradition with them, and several recipes have become embedded in the Dominican repertoire. The most visible is probably the kibbeh, known in the DR as Kipe or quipe. This tasty oval fried snack made with meat and bulgur wheat is a popular street food and no Dominican buffet table is complete without it.

A baked meat pie called turco is a popular snack item in all bakeries, possibly named for María la turca’s famous bakery in the Colonial Zone in Santo Domingo, as is Arroz con Fideos (bil shareyah) --rice with fried noodles-- and Niño Envuelto (malfouf mahshi) --a rice and beef cake wrapped in cabbage)-- both of Egyptian origins.

Tipili (for some Tipile), is the Dominican name for tabbouleh --also known as tabouli.

The Dominican bulgur salad version differs from the Lebanese in the amount of parsley added (Lebanese is more parsley and mint than wheat, and has a prominent green color). The Dominican wheat salad is rarely found with mint.

How close the Tipile --also called Ensalada de Trigo, Ensalada Turca and Ensalada Árabe-- is to the original Lebanese one will depend on who prepares it, and whether they are descendants of these immigrants from the Middle East. In my experience of how they make Tipile, they tend to prepare a version more similar to Lebanese Tabbouleh, since it is part of their family culinary heritage.

Each one has its fans. 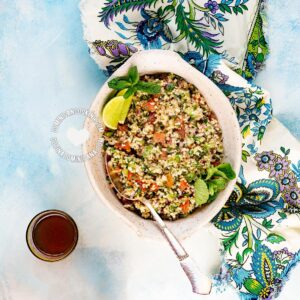 The original tabouleh salad contains a lot more parsley (and mint) than Dominicans add to it. We also did away with the mint, which, in my opinion of little esteem, was a great decision. You may add mint to yours if you so prefer. Bulgur is sometimes sold under the name Coarse Bulgur Wheat [Amazon affiliate Link] It would not be hard to find in Middle Eastern and Latino communities.

I am Dominican. I love all the receipt. I spend hours looking all the delicious food made from my country. I live in Atlanta and I am very proud to show my friends the Dominican Cooking website

Very nice dish. I added a bit of pepper, I don't know if that's authentic, but I liked it.

I learned from my Lebanese stepfather to season tipile with ground allspice and pepper, taste delicious !