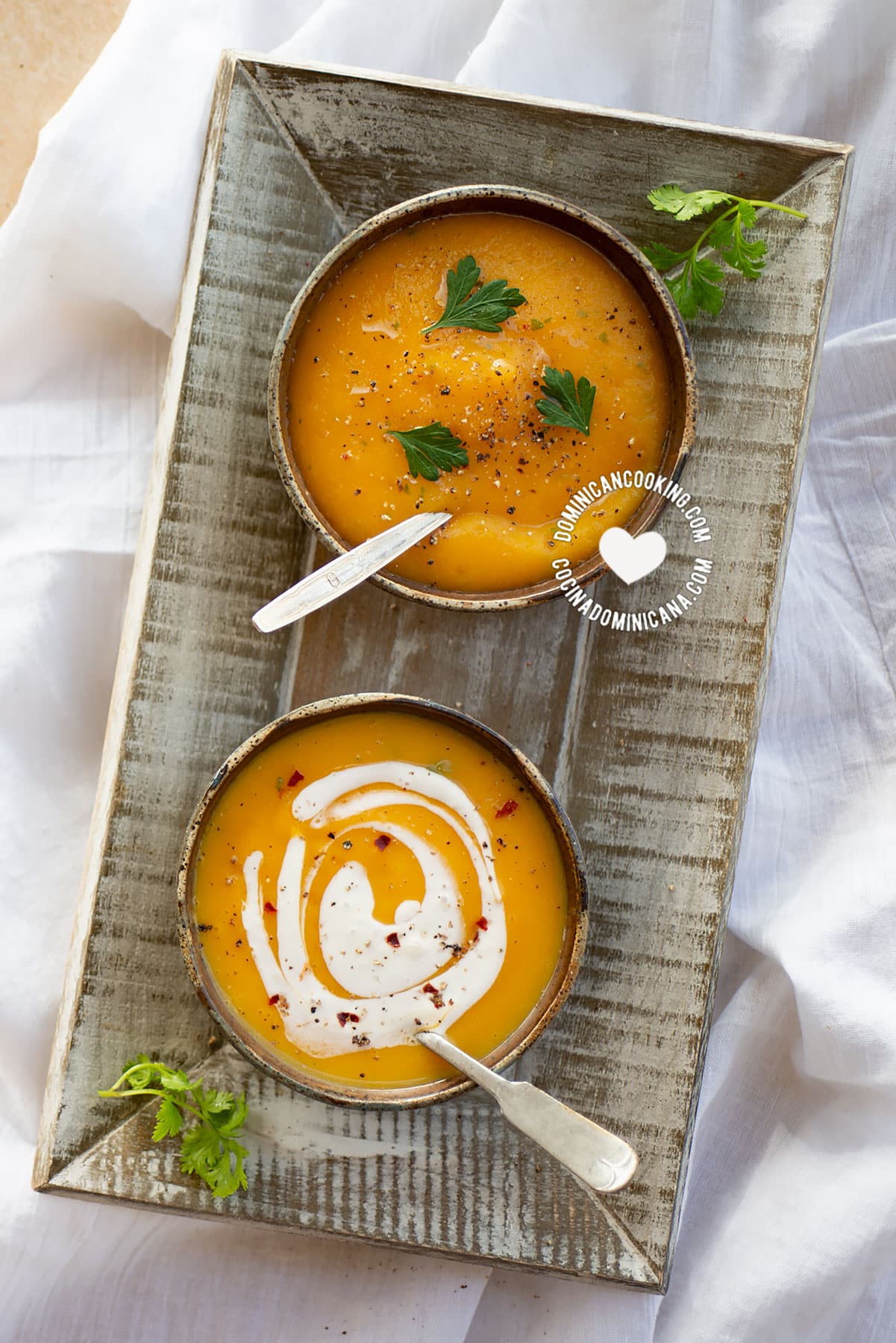 I was introduced to this Crema de Cepa de Apio (Creole Celery Root Cream) for the very first time a few years back. I had been looking out for cepa de apio since I first heard of its existence, when a friend told me it was an extremely rich source of calcium as well as one of the better-tasting tubers, or as Dominicans call them, viveres.

Crema de cepa de apio - "celery root puree" or "cream of celery root" was described as a typical delicacy of Constanza, a scenic highland region in the center of the Dominican Republic, famous for its cool climate and as a fruit and vegetable growing area.

What is cepa de apio?

Although the Dominican name cepa de apio (which I found out after exhaustive research on the internet is also used in Venezuela and Puerto Rico) translates literally as "celery root" this is not the same as the actual root of the celery plant known in English as "celeriac", although the two plants are closely related.

The scientific name for cepa de apio is Arracacia xanthorrhiza Bancroft. In English, it is variously known as "white carrot", "Peruvian parsnip" or "Peruvian carrot", because it is most common in the Andean region.

Its indigenous Andean name is arracacha or arracha, and was traditionally cultivated by the Incas for both human and animal consumption. These days it is being rediscovered in the Andes as a useful crop because of its durability and nutritional value. In Brazil especially it is used as baby food. As far as taste and appearance go, it could be described as a gentle combination of carrot, celeriac, and root parsley, or as Aunt Clara put it - "somewhere between potato and pumpkin" in flavor as well as color.

To give it its full name, cepa de apio criollo (creole celery root) is a tuber. As such it can be used in the same manner as most other tubers: as well as in this creamy soup, cepa de apio can be eaten boiled or as an ingredient in stews, as a puree, or roasted and fried in slices.

I have to say that the moment I tasted it, I was an instant convert to cepa de apio. It is both delicate and tasty, aromatic, and delicious. It reminded me of tender, juicy, and tasty English parsnips at their best. I have not been such a fan of boiled and mashed víveres like the more common yuca and yautia until now, but this ingredient is certain to become a regular item on my shopping list.

Cepa de apio is said to have several excellent nutritional qualities most notably, a high calcium content (four times as much as potato).

This soup is traditionally served in the highland areas of the Dominican Republic, like Jarabacoa and Constanza, where especially in winter, the nights can be fresh. Sitting by an open fire wearing your winter woollies, watching the pine trees rustle in the chilly night breeze, you could be forgiven for forgetting that you are on a Caribbean island.

If a light lunch isn't the kind of thing that appeals to you, this is still a great dish that you must absolutely try. 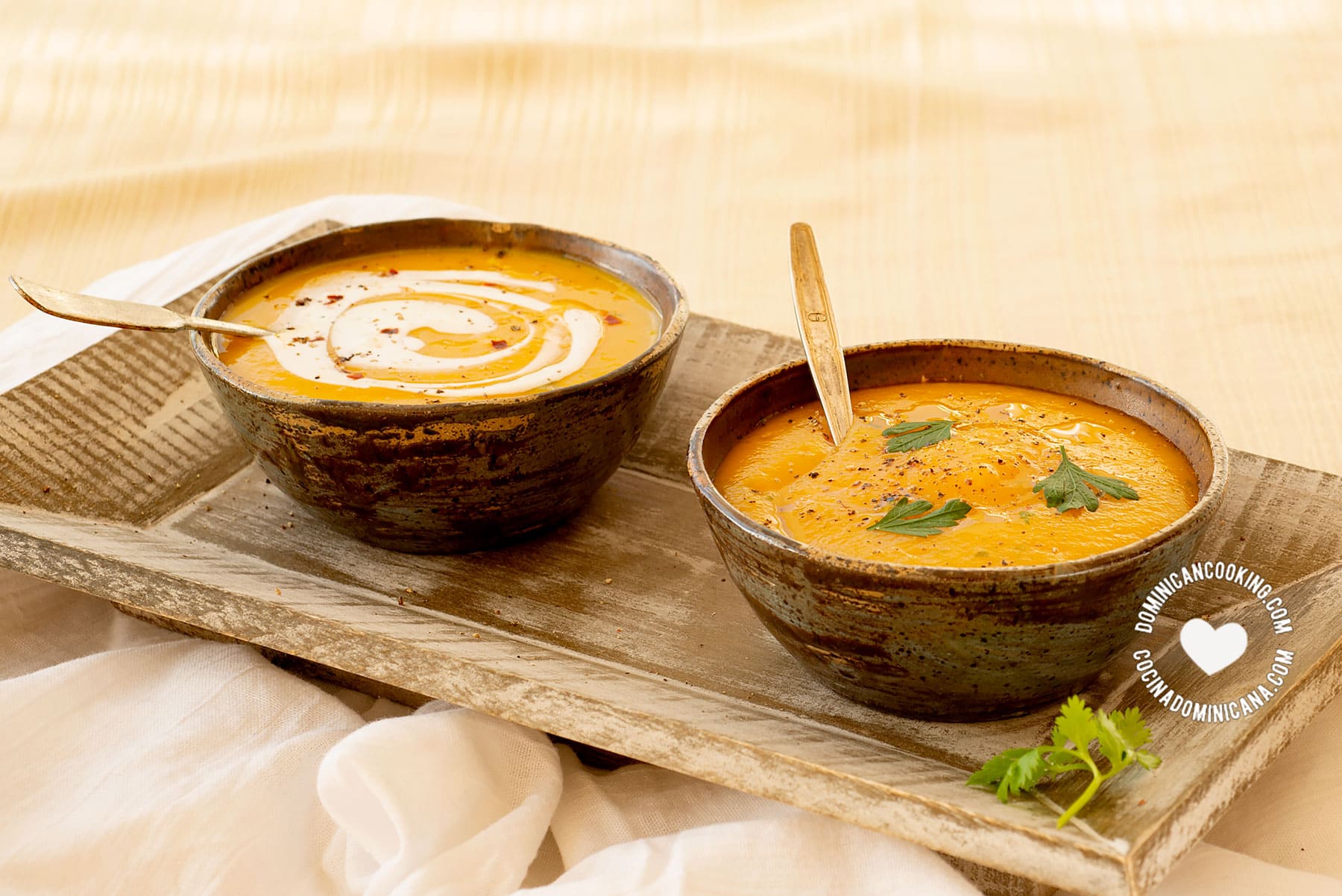 If you can't find cepa de apio, celeriac will work too. If you want to make the soup a bit more creamy and thick, just let more liquid evaporate. Nutritional information was calculated using celeriac, as cepa de apio is not included in the food database used to calculate it. For a vegan version, just do not use sour cream for garnishing, all the other ingredients are vegan-friendly.