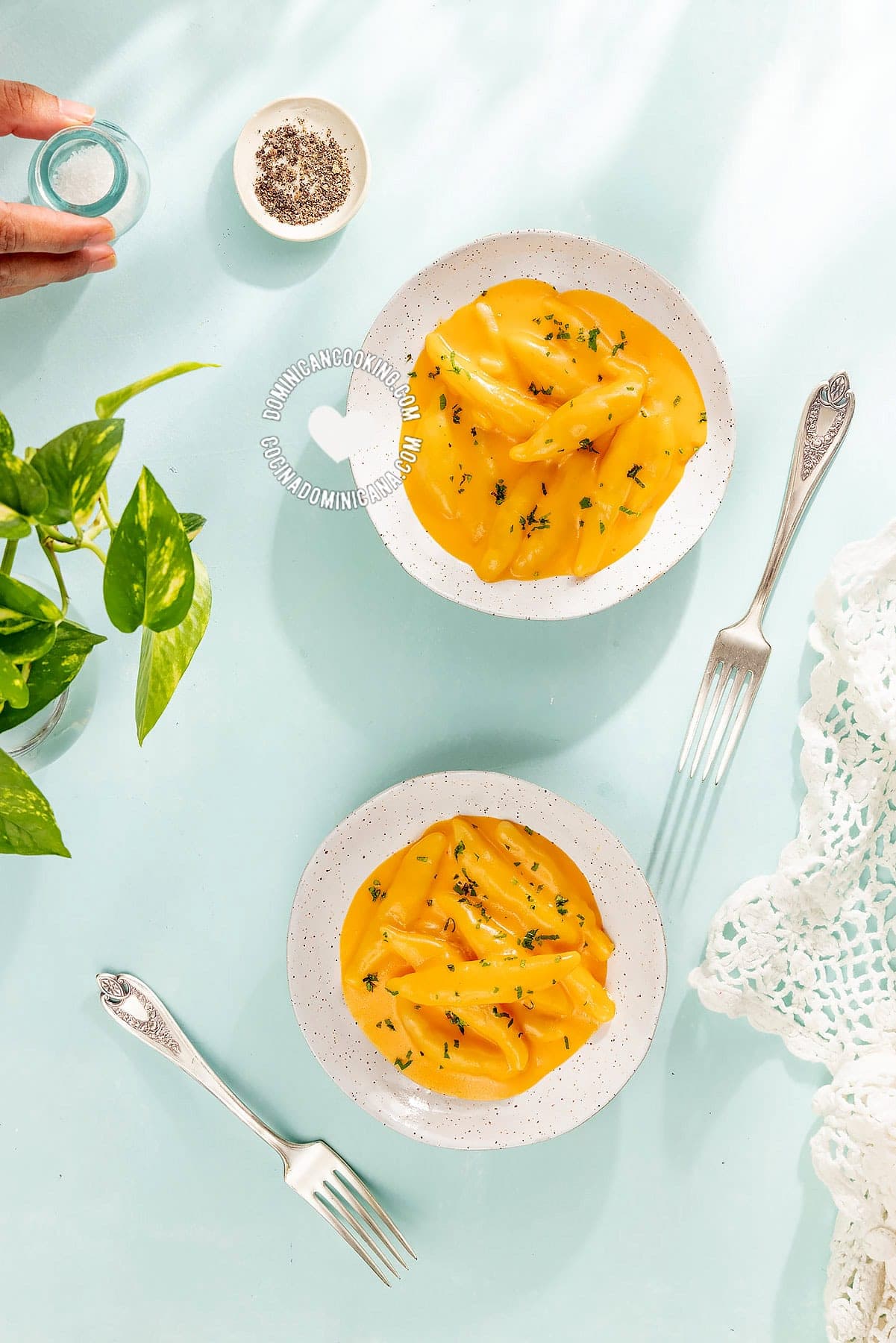 I was an adult the first time I tried Domplines (Dominican-Style Dumplings). This was not part of my regional food culture. If you are totally unfamiliar with it, think of this as a local version of many similar dishes found throughout the world. Think Italian gnocchi, or Austrian spätzle.

Where did they come from?

Dominican domplines arrived at our shores with cocolos. They came from the British Caribbean to work in the sugar industry and settled mostly in and around San Pedro de Macorís.

Dumplings, for most people, are pockets of dough filled with meats, vegetables, or cheese, then fried, steamed or boiled. Of the filled variety, the jiaozi (the best-known Chinese dumplings) are the most famous ones, with Italian tortellini and ravioli possibly following (or vice-versa). Nearly every country seems to have one or many dumpling varieties that are traditional in their cuisine.

In the Caribbean British isles, dumplings are very similar to ours, and to our Bollitos de Maíz, another type of dumpling popular in the Dominican Republic. In Barbadian cuisine, dumplings are slightly sweetened, and served in soup, while in Jamaica they can also be fried.

As we can see, dumplings are nearly universal, with countless versions and combinations of ingredients and preparations.

In this recipe, I give you the simplest sauce you can serve these domplines with: a creamy cheese sauce. However, there are many other ways to make domplines if you're willing to adapt some of our other recipes.

This fantastic version of domplines with batata has the gentle sweetness of batata and a less-chewy bite than regular domplines. It's actually my favorite.

This is the version you'll find in the recipe below, with a very simple, quick-to-make, but very tasty and smooth cheese sauce.

Follow our recipe for bacalao con papa, and add the boiled domplines instead of papas. A very popular classic.

Not much of a recipe is needed. Once boiled, serve domplines next to canned sardines in tomato sauce. If you find the spicy version of these sardines (pica-pica), so much better.

Another very simple one. Once boiled, serve domplines covered with our sauce-rich salami guisado.

Check out this carne molida recipe, add some milk and domplines once ready, lightly heat, and serve with abundant parmesan.

You can't go wrong with this one. Serve our wonderful, fall-off-the-bone pollo guisado over a bed of freshly boiled domplines.

Dominican Domplines are made with wheat flour and are usually cooked in a sauce-rich dish. It's a very humble dish, filling, and packing a lot of carbohydrates It's the kind of dish that will keep you going when the budget is short. Some people, though, eat this because for them it's a comfort, familiar food.

For this recipe, I have made them with a cheese sauce inspired by the one in which it is sometimes traditionally served. But you can see the many ways to serve it on the list above. 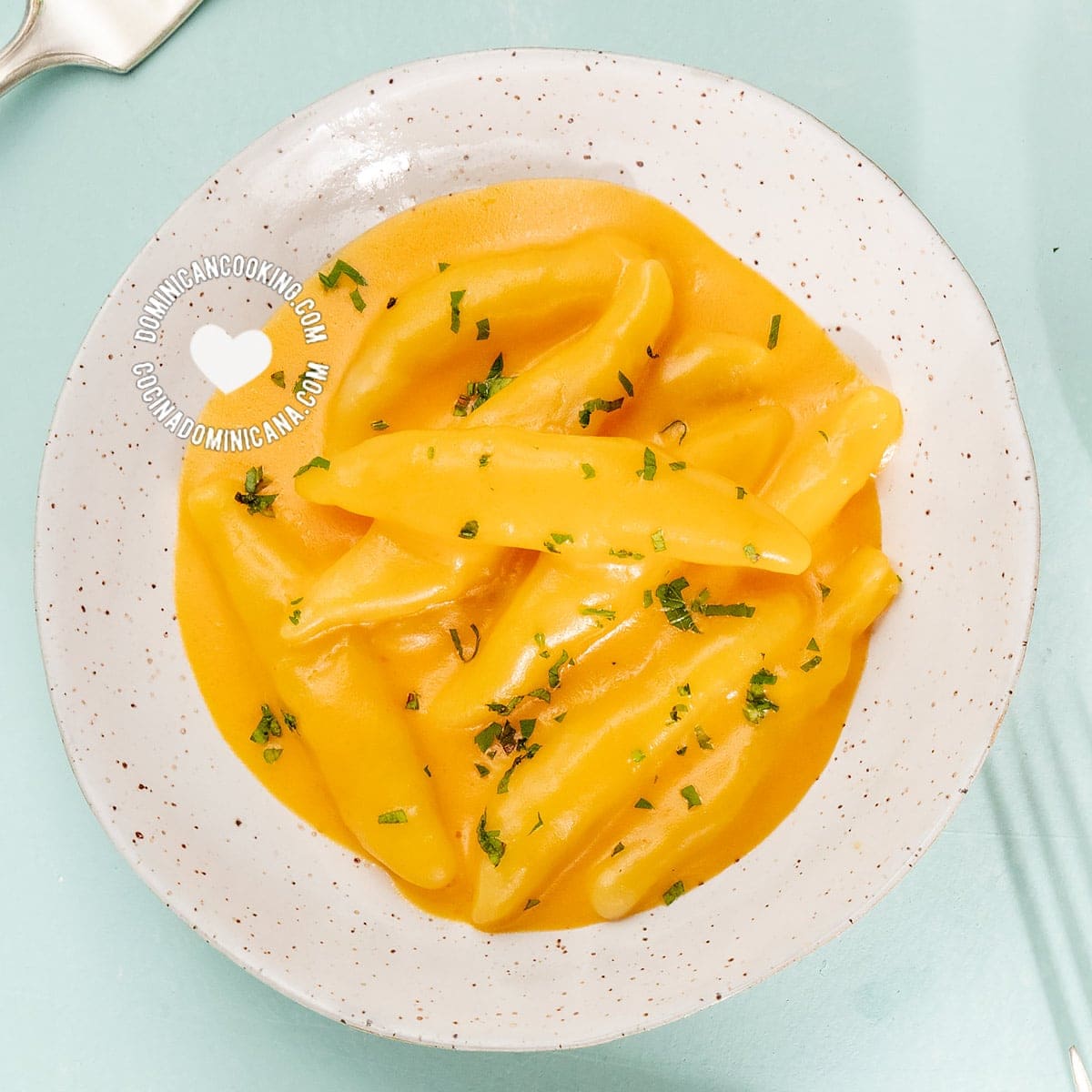 For the cheddar sauce

How to make the cheese sauce

Just so you know, while the portions might seem small, this is because I measure it as a side dish. If you want to have it as the main dish, you should double the size.