There are many versions of Arroz con Leche (Spiced Rice Pudding) but this Dominican recipe makes for a creamy texture and heavenly mix of spices that stands out above the crowd.

Dominican-style Arroz con Leche is one of the most popular and simple-to-make desserts in the Dominican Republic. To the naked eye, it could look like any same old rice pudding, but once you taste it you can't fail to notice the touch of spices that make our Arroz con Dulce so different, in a good way.

Arroz con Leche --Rice Pudding in English-- is truly a nearly-universal dish. It is made in many ways and with varying ingredients throughout the world. This Arroz con Leche recipe is just one of the many Hispanic rice pudding recipes.

Different countries may use different combinations of ingredients, but the basis will be rice, milk, sugar, and some type of spices.

In Denmark, a country where I have spent a lot of time, Rice Pudding is a Christmas tradition, and it's called Risalamande. It's prepared with cream, instead of milk, and served as part of the traditional Christmas Eve dinner.

In the Dominican Republic, this dish is also known as Arroz con Dulce, to differentiate it from a savory rice pudding version that is also relatively popular.

My mother used to make the sugarless version often. Bear in mind that this is an acquired taste, one that I never acquired myself. If you want to try it, though, there are also instructions in the notes for it.

This is my favorite combination for Arroz con Leche (or Arroz con Dulce), you may adapt it to your own personal taste, and I give suggestions for doing that in the recipe notes. 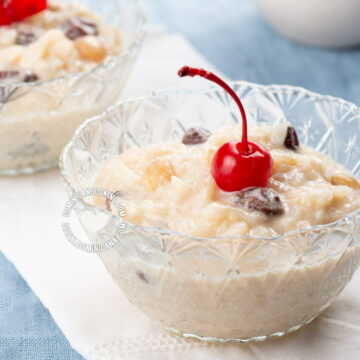 How to make arroz con dulce your way

Each person seems to have a favorite consistency for this dish. This is what I prefer (rice is very soft and the pudding very creamy). Later on, when preparing this dish again you can adjust the liquids to obtain the texture you prefer.

If you want to make the sugar-free rice pudding that is served for breakfast, do not add the sugar listed in the ingredients, and instead of the teaspoon of salt listed in the recipe, add salt to taste.

Ah, my mom's favorite trick to reuse old arroz blanco... This is also a super rice quick easy recipe to make arroz con leche using pre-cooked rice: Mix the cooked white rice and the rest of the ingredients listed above (except the 4 cups of water!) and jump straight to step three. You can choose to make it savory or sweet.

READERS SEARCHED FOR arroz con dulce, dominican-style, spiced rice pudding
Tried this recipe?Please review it, and tell us about it!

I made it and it turned out amazing. Although, I used ground versions of spices and brown sugar, so it came out darker. If you follow the recipe it will come out right. Stand over the stove and mix for most of he cooking process until it says to leave… Read more »

Hi, I'm happy I found your website and recipe. Last year, I asked my mom how she did it so she explained over the phone. It was a flop and I did not dare try again, my kids live porridge and they know what they get from their grandma so… Read more »

Can I make this without the raisins?