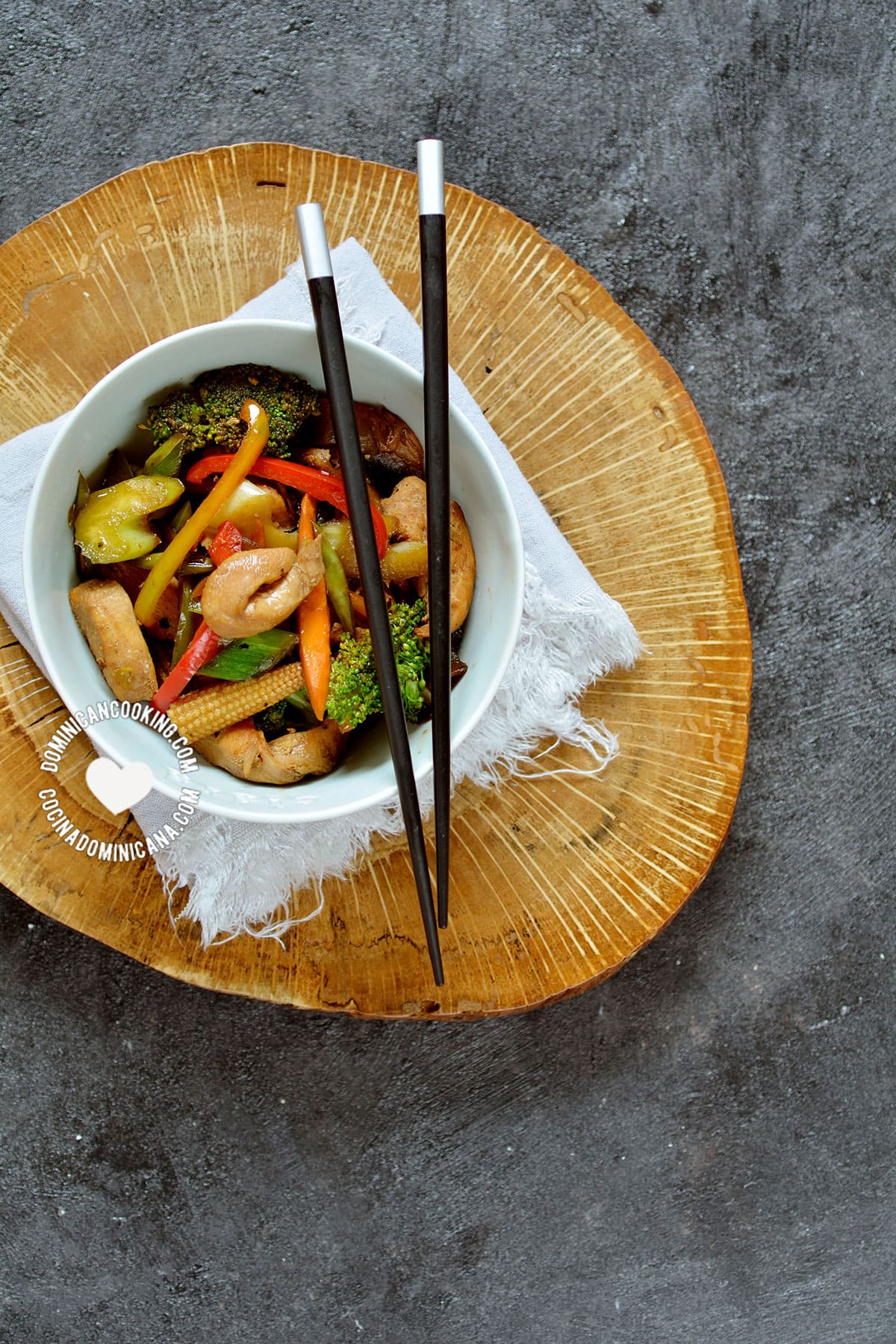 Chop Suey (Chopsuí) is one of the three most popular recipes in Chinese-Dominican culinary culture, and it is as light a dish as you make it.

Many of our readers have let us know how much they appreciate the background information we provide on many of our dishes, their origins, and cultural context. What you may not know is how much we enjoy doing this research, learning about our food and culture, and about the people that have given them to us.

If you haven't done so, we invite you to read the fantastic introduction Aunt Ilana wrote about chofan (Chow Fan) - one of the most popular dishes of Chinese-Dominican cuisine - and about the Dominican-Chinese community. Today we bring you another of their dishes, but unlike chofan, this is usually considered a restaurant fare.

There exists the belief that chop suey (or "chopsuee", as it would be pronounced by most Dominicans), like many other dishes of Chinese origins in the Americas, is not really Chinese but a local adaptation. This is more false than true.

The original name of chop suey is za sui, which in Cantonese (most of the early Chinese immigrants to America were from the province of Canton) means "assorted pieces", a very descriptive name. Obviously the ingredients available in America differed from those found in China. The dish was adapted, but its origins can be traced back to China.

Maybe these adaptations are what has made it such a popular dish, or maybe it was because it contains a lot of vegetables, which makes for a filling, inexpensive dish.

Strangely, and unlike chofan, chop suey is seldom made at home. I suppose few people have noticed how easy it is to prepare, and how easy it is to obtain the ingredients in it. With this recipe, adapted from the many I have tried, we hope you decide to give it a try.

This is a decidedly Dominican-style adaptation of a dish, that as you've read above, has a complicated history. If you go to a Chinese restaurant on La Duarte Av. in Santo Domingo (where Chinatown is located), the dishes tend to be more "authentic" (for lack of a better term), the further you get from people of actual Chinese heritage the recipe gets more flexible.

I am a huge fan of those La Duarte restaurants, but I am not going to pretend that this recipe will yield the same results. It's very tasty and more accessible, though, so at least it has that going for it. 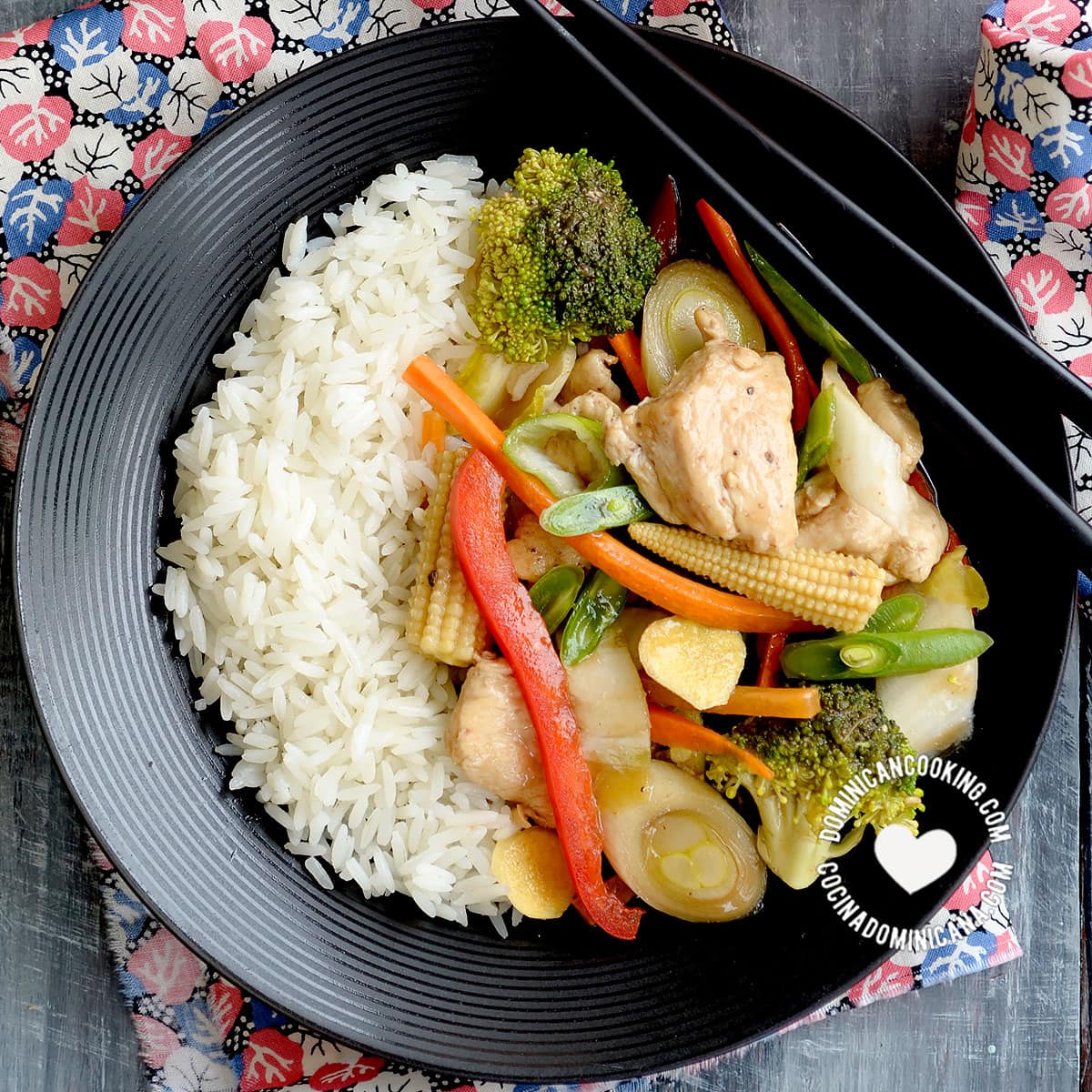 By: Clara Gonzalez
Chop Suey (Chopsuí) is one of the three most popular recipes in Chinese-Dominican culinary culture, and it is as light a dish as you make it.
5 from 1 vote
Save for Later Send by Email Print Recipe
Prep Time 15 mins
Cook Time 8 mins
Total Time 23 mins
Course Dinner, Lunch
Cuisine Chinese, Dominican
Servings 6 servings
Calories 352 kcal

For proper stir-frying, you need a seasoned wok and a high-flame burner. If you don't have either, the next best thing is to use a flat-bottomed cast-iron frying pan at the highest temperature your stovetop reaches. The secret ingredient in Chinese restaurants is MSG, available under the name brand Aji-no-moto (and others). Add a pinch to the sauce, or more to taste. Be mindful that the sodium content will be higher if this is something you worry about. No two Chop Suey recipes are alike. Other ingredients that can be used are mushrooms, broad beans, bamboo hearts, etc. Adapt the recipe to your taste. If you want to make a vegetarian version, eliminate the chicken and the corresponding steps. The trick to Chop Suey (cooked but crispy vegetables) is in short cooking at high temperature, the vegetables are added starting with the ones that take longer to cook to the ones that take less time.

@Ina Lipkowitz!!!
Oh my!!! You just reminded me of my childhood!!! As a fellow New Yorker (Dominican-York

I can remember Cuban-Chinese restaurants on the Upper West Side of Manhattan. I loved them because it was the only time I could have a cafe con leche after a spicy stir-fry. Do you ever make this chop suey with tofu? (My daughter's a vegetarian and is allergic to all… Read more »

Oh, wow! One of my favorite dishes. I didn't know it was so easy to make. Cooking time!