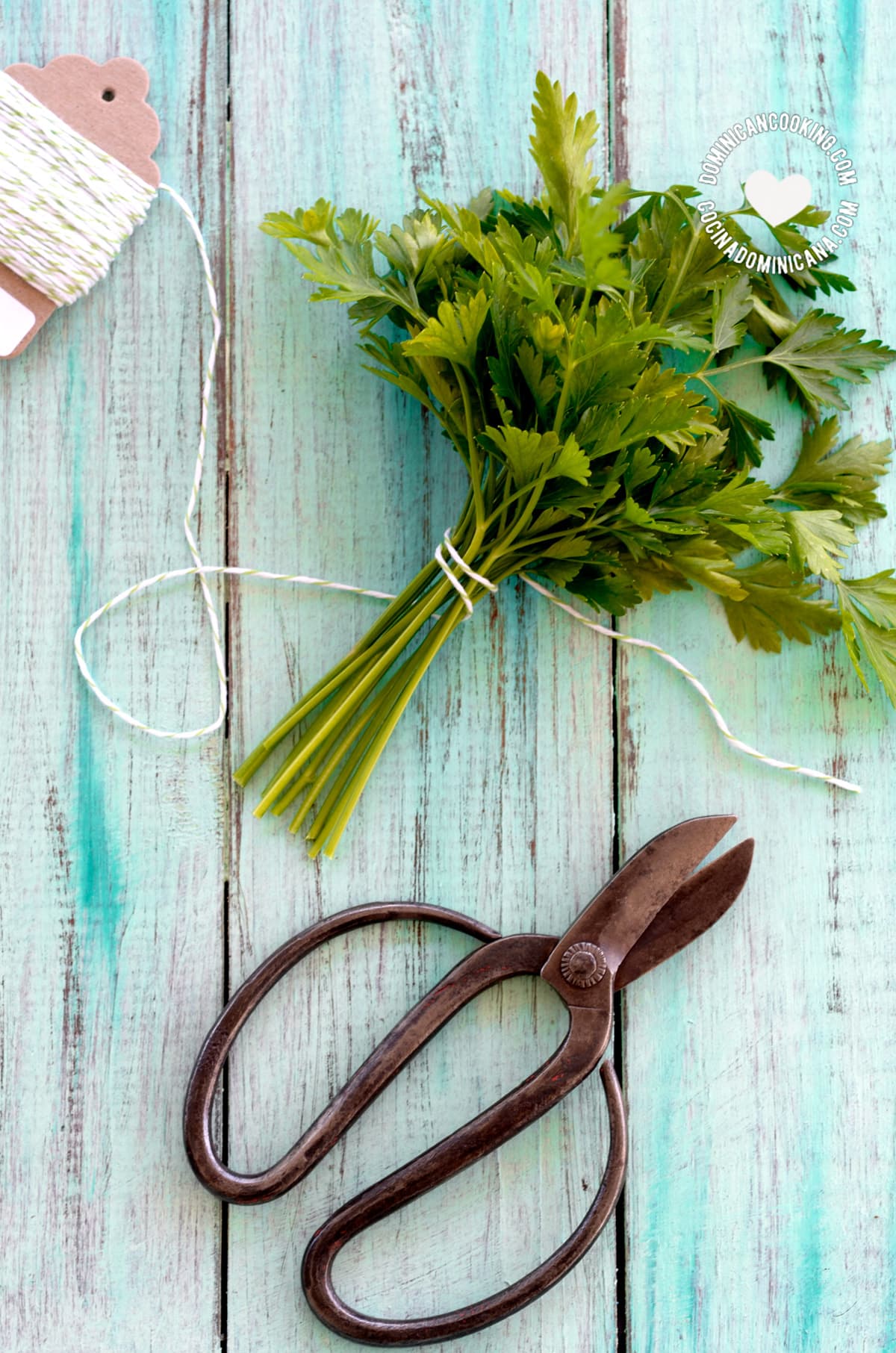 Some of the herbs that give Dominican food its distinctive flavors will be more familiar than others to readers from outside the country.

Some of the herbs that give Dominican food its distinctive flavors will be more familiar than others to readers from outside the country. In some cases, like oregano and lemongrass, a familiar herb will be used in a different way.

Cilantro or cilantrico (Coriandrum sativum) is known as cilantro as well as coriander in English – Americans say cilantro leaves while in Britain it is labelled fresh coriander or coriander leaves. This differentiates the fresh herb from ground coriander or coriander seeds - common ingredients in Indian cooking. Cilantro/coriander also used to be called "Chinese parsley” but this has fallen into disuse. Alternative words for cilantrico in the DR include recaíto and verdurita.

Recipes that typically use cilantro/coriander include rice and beans dishes, legumes, soups, fish and seafood dishes.

Cilantro ancho (Eryngium foetidum) is not as well known outside the region. In English and other Spanish-speaking countries it is often called culantro. Although botanically unrelated, its taste is like a more pungent version of cilantro/coriander. Its names in the English-speaking Caribbean are all variations on the Hindi bandhania, a name brought over by East Indian migrants to the Caribbean islands (although the herb itself is native to the Americas). In Puerto Rico it’s called recao, which goes some way to explain why cilantro/coriander is sometimes called recaito in the DR. Its other names include long, wild, or Mexican coriander, fitweed, spiritweed, duck-tongue herb, sawtooth or sawleaf herb and sawtooth coriander.

Cilantro ancho is usually a main ingredient for flavouring the sofrito, the base of many a Dominican dish.

Parsley (Petroselinum hortense) is called perejil in Spanish. The name also has uncomfortable connotations in the DR as it is said to have been the word used to distinguish Haitians from Dominicans during the 1937 “parsley massacre”, based on the notion that the word “perejil” was difficult for Haitians to pronounce. Parsley is known to many dominicans as verdura, and it is a main ingredient of tipili, the Dominican (mint-free) version of Lebanese tabbouleh. It is also used in rice dishes, legumes and stews.

Thyme (Thymus mongolicus) is known as tomillo (the conventional Spanish word) or ditén (a word of Haitian Creole origin). In the northwestern provinces it is a common addition to stews, beans and legumes.

Thyme may be found in bean dishes and in sancocho.

Oregano (Origanum vulgare) is called the same thing in both English and Spanish. It’s one of the most commonly used herbs in Dominican cooking. Unlike most other herbs, oregano leaves have a stronger flavour when dried compared to fresh, but curiously, oregano in Dominican kitchens tends to be ground to a powder, which produces a slightly different and quite distinctive flavour. Lovers of Italian food will recognise dried oregano leaves as a standard seasoning for tomato sauces and pizza, but my Dominican mother-in-law maintains that it doesn’t go well with tomato.

Used mainly in beef dishes and as an ingredient of sofrito, Oregano is also said to give goat meat an extra tasty flavour if the goats have grazed on wild oregano bushes.

Celery (Apium graveolens) is called apio in Spanish. It’s not a herb in the conventional sense, but while the stalks are used as vegetables, the leaves are used for flavouring soups and stews.

Incidentally, not many people know that botanically speaking at least, the banana ‘tree’ is also a herb - the tree is the world’s largest herbaceous plant.

Chives (Allium schoenoprasum), the smallest members of the onion family, are called puerritos in the DR. Other Spanish names are cebollín and cebolleta, and an alternative name in the DR is puerro fino. These words are derived from puerro (leek) or cebolla (onion).

Despite being widely available chives are not common features of Dominican fare. The only recipe that comes to mind that includes chives is chofán (Dominican chow fan).

In the DR, mint - yerbabuena - the ‘good herb’ in Spanish, and lemongrass - limoncillo, are used in drinks only – herbal teas or tisanes, tisanas in Spanish.

Lemon grass (Cymbopogon nardus and Cymbopogon winterianus) will be familiar to lovers of Thai food, and mint (Mentha × piperita) is popular in the Middle East and North Africa as an ingredient in many sweet and savory dishes as well as in mint tea.

In this article, we use the term herb in the culinary, as opposed to the botanical sense. In culinary terms, a herb is defined as any plant "with leaves, seeds, or flowers used for flavouring, food, medicine, or perfume" or parts of "such a plant as used in cooking".

Unlike speakers of US English, I pronounce the ‘h’ in the word herb.