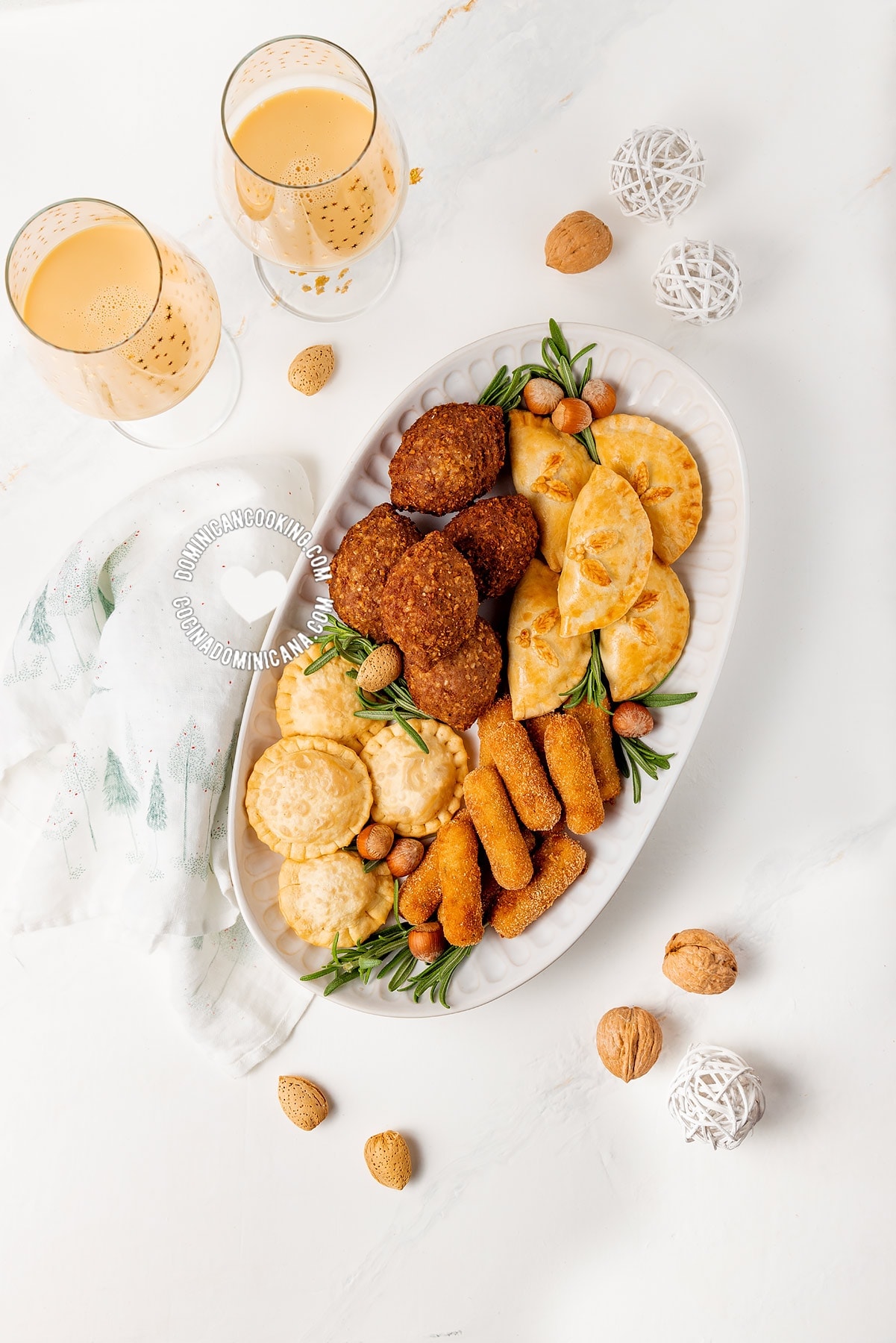 Christmas and New Year are the most important Dominican celebrations and food takes a center stage. Here's our Guide to Dominican Christmas.

When temperatures start to fall and the sun begins to set a bit earlier, corner fruit stands and roadside fruit vendors in the central square or parque of towns and cities in the Dominican Republic start displaying their seasonal decorations: apples, mandarines, pears, and grapes dangling from strings, a lot like seasonal baubles.

Food is probably the most important and distinctive part of the holiday celebrations in the Dominican Republic. Socioeconomic conditions and family traditions will dictate which dishes and how many will be served at the holiday feasts, but these are what most Dominicans aspire to serve at these family events.

Christmas foods and drinks in the Dominican Republic

Telera is the name for a baguette-shaped soft bread that is only eaten at Christmas time.

Snack foods or picaderas, like kipes (quipes or kibbes) and pastelitos (empanadas, pasties), are also popular at Christmas parties and gatherings.

Pastelones (casseroles) are a popular addition to the festivities, and none more popular than pastelón de plátano maduro.

Many of the traditional elements of the Dominican holiday season are decidedly local --including té de jengibre or ginger tea-- but many are imported, like Danish butter cookies, Spanish turrones, candies, nuts, and foreign fruits.

Year-round Dominicans have access to juicy mangoes, creamy avocados and arguably the world’s best bananas, just to mention a few of our locally grown fruits. The less fortunate have to wait until the Christmas bonus bonanza to afford the imports. And this is how apples, mandarines, grapes, and raisins have become such an integral part of the Dominican Christmas tradition.

There is no dessert commonly associated with the Christmas Eve feast. Candy, apples, and grapes are usually served after the meal; but we offer some with traditional elements already present in la cena navideña.

How are Dominican Christmas celebrated?

Typically, Dominicans celebrate Christmas by gathering with their nuclear or extended family to eat their Christmas meal on Nochebuena (Christmas Eve). It is the most lavish meal of the year for most Dominicans.

While most of our holiday customs are common to the whole country, how you celebrate the holidays, and which, will depend a lot on socioeconomic status and family history.

What is the Christmas Eve dinner called?

The year's end celebrations in the Dominican Republic continue beyond New Year's Eve (actually, to Reyes, to be exact). La cena de año nuevo, a similar feast to the one served for Christmas is eaten on the eve of the new year. Families get together to wait for "las doce campanadas", or the twelve chimes, the countdown to the new year.

The young adults in the family may continue the party at discos and nightclubs, unlike the Christmas party that is usually a strictly family affair.

Thanksgiving is not officially part of the traditional Dominican festive calendar. However, Dominicans who have emigrated to the United States (and Canada) have incorporated the celebration into their family customs. Unsurprisingly, many of the dishes served at the Christmas and New Year feasts have become part of the Thanksgiving celebration in their homes.

Nacimientos are cribs or nativity scenes; many Dominican families still follow this tradition of installing a Nacimiento at the center of their Christmas decorations [1]. They can range from life-size to miniature, and some Christmas events include a living nativity scene.

Large, freestanding Christmas decorations known as charamicos also make an appearance. Charamicos can take the shape of Christmas trees, angels, stars, reindeer, farm animals, and other creations fashioned out of wooden branches [2]. Glittering and twinkling Christmas lights are a firm favorite, and especially magical when wound around palm trees.

Misa de Gallo is the name for Roman Catholic Midnight Mass celebrating the nativity of Christ on Christmas Eve, although the religious service is often held earlier in the evening.

Traditions vary according to family customs and economic limitations. But as a rule, gifts are only given to the children of the family.

As the country becomes globalized these traditions have -- to a certain extent -- been abandoned in favor of Santa Claus as the gift-bringer.

Less well known, "La Vieja Belén" is a folklore character who brings gifts to children who for one reason or another did not receive them for Three Kings Day, and who comes a week after Día de Reyes.

Angelito is the Dominican equivalent of Secret Santa, or "White Elephant" exchanges, and are very popular in the workplace and schools in the run-up to Christmas.

The list of contents of a Dominican Christmas basket can range from select gourmet treats often sent by businesses as a token of appreciation to their regular clients - to a basket of staples, which is a great way of helping needier households ensure they celebrate their traditional Christmas dinner.

I thought I d concentrate on the latter, to help those who wish to make a useful gift to friends and neighbors who are under economic strain at this time of the year. My suggested list of contents is:

Of course, you can vary the contents and quantities according to your budget, the size of the household, and personal taste and preference.

Christmas weather in the Dominican Republic

Although the Christmastime weather in most of the country is still pretty warm, December and January are the coolest months of the year. In the lower-lying coastal areas, it is still mostly beach weather.

In the mountainous regions, especially in the Constanza-Valle Nuevo area, the weather is much more "Christmassy" and can dip down to freezing at this time of the year.

The tradition of aguinaldo is like a more exuberant version of Christmas caroling: a group of friends goes from house to house in the early hours of the morning, singing Christmas songs, often accompanied by musical instruments, and waking up their friends and neighbors to get them to join them as they continue on their way. It is customary to offer the revelers a drink, such as té de jengibre, or something stronger like ponche, or rum

Villancicos is the Spanish word for Christmas carols. The Dominican Republic and other Spanish-speaking Caribbean nations share some of the same merengue or salsa Christmas songs like Alegre Vengo.

Musician and writer Rossy Diaz makes the connection between food and Christmas music [3]:

"These popular songs namecheck the food, fruits, and beverages that are traditionally consumed during the Christmas festivities and these sounds can be said to complement the culinary experience. Christmas in the Dominican Republic can therefore be described as a multi-sensory experience, starting through the ears with classic merengue tracks like Salsa pa tu lechón by Johnny Ventura, Llegó Juanita by Milly Quezada, La juma by El Conjunto Quisqueya, and Pato robao by La Familia André, which start playing on the radio well before December and which complete the narrative of this important social event."