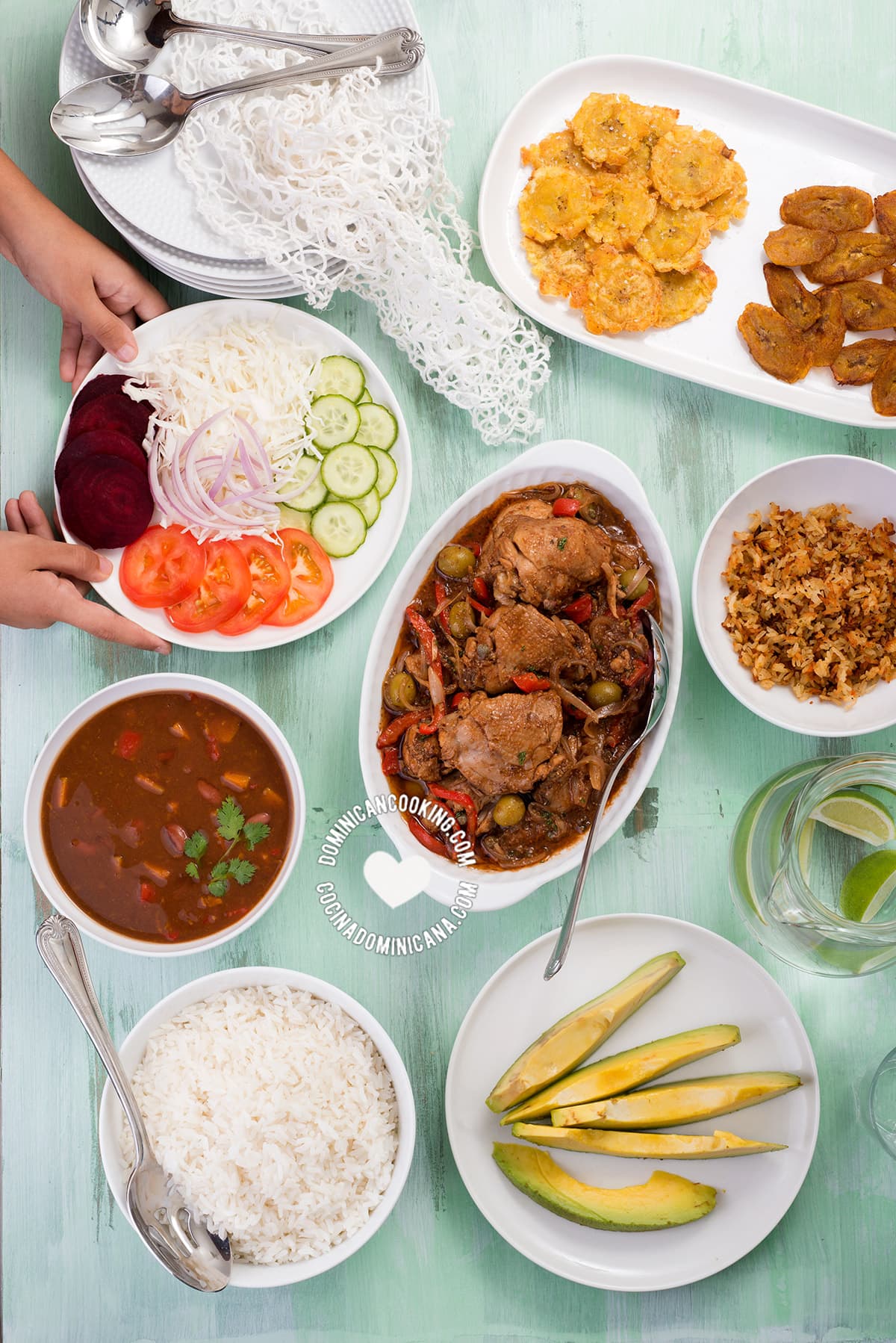 One of the first things that most visitors to the Dominican Republic will learn is that La bandera dominicana, or “The Dominican Flag”, is also what Dominicans call the national standard lunchtime dish.

The times of day when people eat breakfast, lunch, and dinner are defined by practical considerations like work routines, weather conditions, and daylight hours, combined with socio-economic and cultural factors. Maybe I’m over-analyzing a simple fact because when one thinks about it, this is fairly obvious.

In terms of the way mealtime schedules have evolved and been shaped, the Dominican Republic is fairly typical of most of Latin America and the Spanish-speaking Caribbean.

In the mid-20th century the country’s rural areas were still home to 70% of the population and the cities accounted for 30%, but by the end of the century, 70% were living in the cities, leaving 30% in the countryside (approximate stats and dates). This has led to a shift in daily routines, including mealtimes. In the campo, people who worked outdoors would make an early start to avoid working during the hottest part of the day. The traditional lunchtime was around noon - in some homes as early as 11:00 a.m. - with a short siesta before returning to work once the heat had let off.

Some differences still persist between the countryside and the cities: in provincial towns in the Dominican Republic, everything still comes to a standstill from about noon to 2 pm as I discovered when I was working in Cotuí after I first moved to the DR. In small towns, many non-rural workers will also follow this routine as the home is usually close enough to return home for lunch and a nap before going back to work in the afternoon. Rural people tend to eat heavier breakfasts, with mangú, fried eggs, fried cheese, and salami in the traditional version. City dwellers usually have something lighter, like a cup of coffee and a bread roll, and save the more substantial traditional breakfast for their days off.

On the whole, however, in most households lunchtime has shifted to about 1:00 or 1:30 p.m. In fact, in large cities, lunch is not eaten at home at all if all the members of the household are at work or at school. While many middle-class working couples still have domestic help, the changes in women’s roles thanks to increased education and entry into the workplace usually mean there is no one at home to cook lunch anymore. This has also relegated the main meal of the day to the evening in some households, although in my experience of office life in Santo Domingo, a lot of people bring a packed lunch to the office and reheat it in the kitchen at lunchtime, or order “la bandera” from a nearby fonda.

Across the rest of Latin America and the Spanish-speaking Caribbean, the lunchtime meal is also eaten between noon and 2:00 p.m. with the possible exception of Mexico, where people tend to eat nearer the middle of the afternoon, as in Spain. In most cases, weekday lunchtime is early, while on the weekend it tends to be a later, more leisurely affair. There is more variation between evening mealtimes. In some countries, including the Dominican Republic, dinner is a light meal eaten in the early evening, while in other countries, like Argentina, dinner is eaten later in the evening.